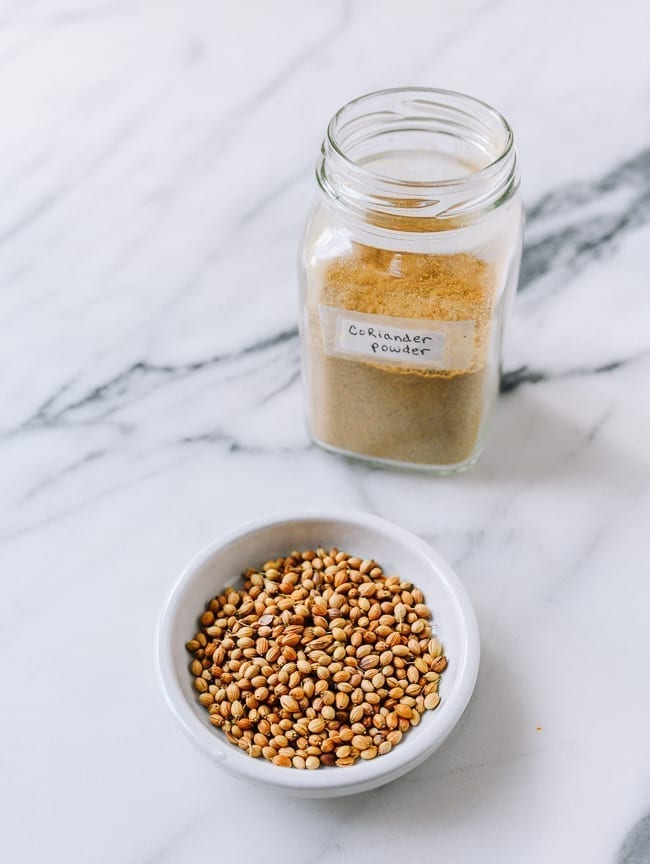 Coriander seeds have been in use for thousands of years. They were found during excavations of Neolithic sites in the Middle East and in King Tut’s tomb alongside other valued herbs and spices.

The seeds resemble small wooden beads, and may not look too impressive at first glance. However, toasting and grinding the seeds reveals a lovely citrus aroma that pairs perfectly with other spices in noodle soups, poultry dishes, stews, and more.

What Are Coriander Seeds?

Coriander seeds (yánsuī zi, 芫荽子) are the fruit of the Coriandrum sativum plant, a flowering herb known in North America as cilantro, and in other English-speaking countries as coriander. This herb is related to parsley, and may also be referred to as Chinese parsley or Mexican parsley.

The coriander plant is native to a region that stretches across Southern Europe, Northern Africa, and the Middle East. In these regions, coriander seeds are a common ingredient in recipes.

While you may be more familiar with cooking with fresh cilantro/coriander leaves, cooking with the seeds yields a very different flavor.

Coriander seeds give off a bright citrus-y and floral aroma. Their taste is warm, slightly sweet, and reminiscent of lemon.

How Are Coriander Seeds Used?

The zesty flavor and aroma of coriander complements many flavors without being overpowering. It often plays a supporting role in recipes that layer many spices for a rich and complex flavor profile.

Indian food is one of the best examples of coriander’s ability to partner with other flavors. Our love for Indian food knows no bounds, so we keep coriander seed on hand for when we’re craving the deeply gratifying flavors of say, an Indian Lentil Soup with Garlic Naan.

Ground coriander is typically a key ingredient in garam masala, a fragrant blend of spices that plays a key role in the can’t-get-enough flavor of many savory Indian dishes.

In recipes like our Grilled Tandoori Chicken and Chicken Tikka Masala, we flavor the chicken to heavenly perfection with a blend of ground coriander, garam masala, turmeric powder, paprika, and other aromatic ingredients.

Coriander also makes an appearance in some of our favorite Asian dishes like Vietnamese Pho and Taiwanese Beef Noodle Soup, which are both unbelievably easy to make using an Instant Pot (click here for the Instant Pot Pho recipe).

We lightly toast the coriander seeds before tying them up into a homemade packet of aromatic herbs and spices like star anise, cinnamon, and bay leaves to infuse the broth of these soups with a satisfying spicy-sweetness.

While many of our favorite Chinese recipes call for fresh cilantro, coriander seed is generally less common in Chinese cooking. However, we do grind and toast coriander seeds with cumin seeds and white pepper when preparing the sauce for our Spicy Cumin Lamb Biang Biang Noodles, which rivals the esteemed dish served at Xi’an Famous Foods in New York City.

You can find coriander seeds in the spice section of most supermarkets, as well as online and at Indian and Asian grocery stores.

It’s also possible to purchase pre-ground coriander, but we prefer to buy the whole seeds and grind them as needed with a mortar and pestle or spice grinder. This also allows us to toast the seeds before grinding.

The seeds will retain their potency for up to 4 years when properly stored in a air-tight container and kept in a cool, dry environment. The ground stuff will start to lose its flavor and aroma after about a year.

Our Favorite Recipes That Use Coriander Seeds