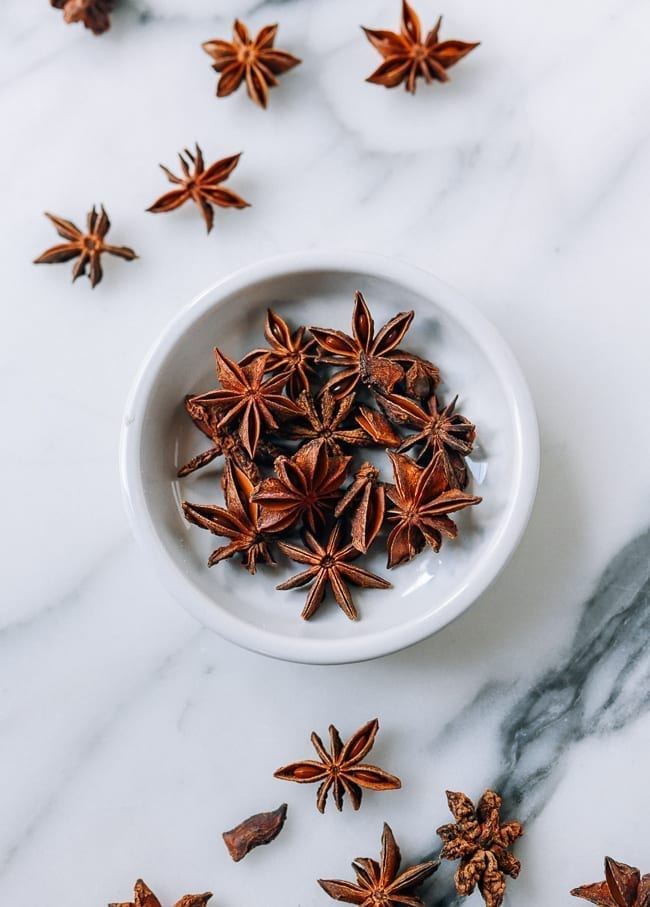 One of the quintessential ingredients in Five Spice Powder, star anise (bājiǎo, 八角)  is a unique spice with a variety of uses in Chinese cuisine.

What Is Star Anise? How Does It Taste?

Harvested from a small evergreen tree that grows mostly in southern China and Southeast Asia, star anise is a fruit with six to ten pointed seed pods.

Before the green fruit fully ripens, we pick them and dry them, causing them to harden. Whole pieces resemble small wooden flowers.

Although star anise shares a name and some flavor qualities with common anise (or aniseed), the two spices are not biologically related.

This ingredient has a powerful, licorice-like flavor and aroma that is slightly bitter, with a hint of sweetness.

How Is Star Anise Used?

The Western world commonly associates licorice with sweets. In Asian cooking, you may be surprised to find star anise in more savory dishes.

Its bittersweet aroma and flavor serves as an excellent complement for fatty meats such as goose, pork, and duck.

It also can enhance slow-cooked beef and chicken, such as our tender Chinese Braised Oxtails or Soy Sauce Chicken.

However, its aroma is quite intense and can easily overpower a dish. Use it sparingly. When used in excess, the resulting dish can have an unpleasantly medicinal flavor.

Whole pieces should be removed from a dish before serving, especially because they are still hard and would be unpleasant to bite into.

You can find this ingredient in its whole, star-shaped pod form in some regular grocery stores, but it’s much more likely to be found at Asian stores.

It is also widely available online via Amazon, The Spice House, and other web retailers.

As of this writing, Chinese online grocery retailers like yamibuy.com, justasianfood.com, and mimodian.com also carry it.

You can tell it is high quality and fresh if it immediately releases a strong perfume of licorice.

Store the spice in an airtight container away from direct light, heat, and moisture.

Whole pods will stay fresh for about 2-3 years when stored properly. The ground version will begin to lose its flavor after 1 year.

If star anise is not available, you might try using Five Spice Powder, which typically includes star anise as an ingredient.

Fennel seed and common anise (aniseed) can also work as substitutes with their mild, licorice-like flavors. However, they are less potent, so we recommend using about twice the amount by weight that the recipe calls for.

Note that these spices are more difficult to pick out of a dish, so it’s best to wrap them in cheesecloth before adding them. The resulting flavor will also be a bit different.

Cloves and allspice also have a similar bitter-sweetness, though they lack that unique licorice flavor.