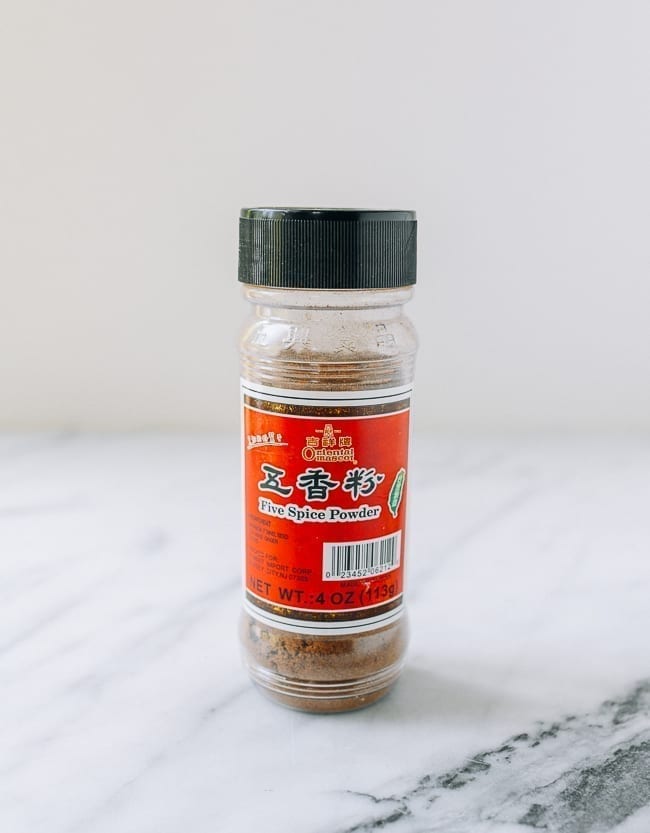 You’ve probably heard of Chinese Five Spice Powder (wǔxiāng fěn, 五香粉), which has been used in Chinese cooking for centuries. Though it is widely known, its origins are still a bit mysterious.

It was believed that the mixture would foster internal harmony by uniting the five main flavors traditionally employed in Chinese cuisine: sweet, sour, pungent, bitter, and salty.

With these perfectly balanced flavors, aligned with the five main elements (earth, fire, water, metal, and wood), tradition held that one could achieve balance in mind and body.

Let’s talk more about what this ingredient is, and how to use it in Chinese cooking.

What Is Five Spice Powder?

However, many recipes may also include other ingredients, such as ginger, nutmeg, licorice, orange peel, and galangal.

Regardless of how many spices it has, it packs a punch with its warm aroma and pungent flavor.

The star anise tastes faintly of licorice, while the cinnamon and fennel offer warm and sweet notes. The Sichuan peppercorns have a floral, almost lemony flavor, while the cloves are strong, sweet, and slightly bitter.

Combined in their various ratios, all these flavors create a unique spice blend you really have to taste in order to understand why it’s used so widely.

How Is Five Spice Powder Used?

While Five Spice Powder won’t magically cure your ailments, it can certainly be the answer to a lackluster dish.

It is perhaps best when used to season meat (especially those that are high in fat content).

You’ll often find it in Chinese marinades and dry rubs, like in our Roasted Chicken with Sticky Rice, one of Sarah’s absolute favorite dishes growing up!

It also plays a large role in our Cantonese Roast Pork Belly.

It can also really enhance fried chicken, roast duck, and ribs. In Cantonese restaurants, you’ll often see it mixed with salt and served with fried or roasted chicken and pork. You can dip pieces of juicy meat into this seasoned salt for maximum flavor punch.

Although it’s not spicy-hot, it is rather intense. “Less is more” is a good rule of thumb to use when cooking with it.

With that in mind, feel free to experiment. It’s such an easy way to add complex flavor to a dish, it’s almost like cheating!

You can find this ingredient at almost any grocery store, whether brick-and-mortar or online.

When stored properly in a place that is cool, dark, and dry, Five Spice Powder will keep for several months. If that jar of 5 spice powder in your pantry is three years old or more? It’s probably time to replace it.

If you don’t have any Five Spice Powder on hand, it is fairly easy to make it from scratch.

Check out our article on How to Make Five Spice Powder.

Rather than adding equal amounts of each spice, you can also experiment with the proportions to create your own blend catered to your taste preferences.

Our Favorite Recipes That Use This Ingredient: