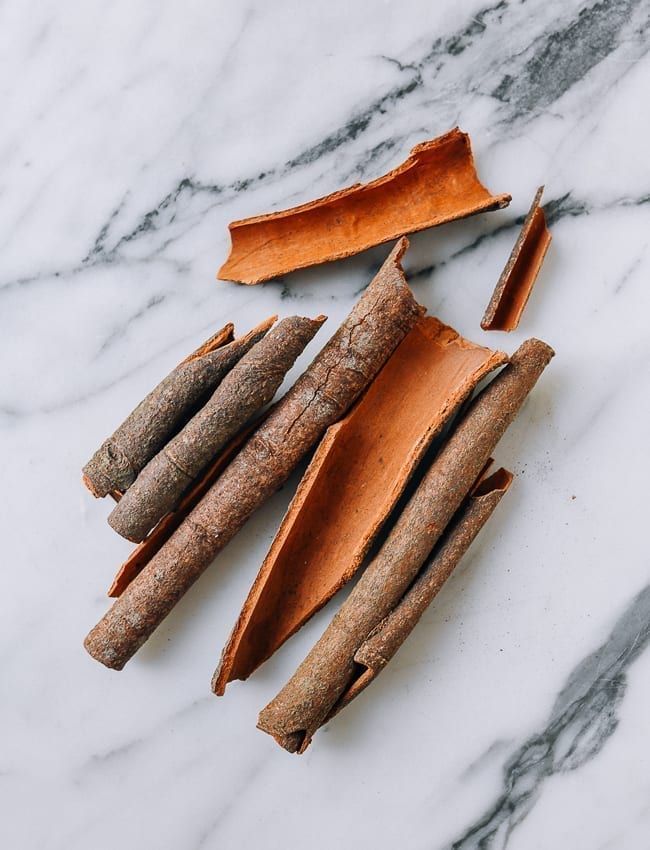 When it comes to cinnamon, there remains some confusion about the different types (there are several) and their culinary applications. In this article, we’ll tell you everything you need to know about cooking with Chinese cinnamon.

What is Chinese Cinnamon?

When people talk about cinnamon, they are referring to a spice made by harvesting, drying, and fermenting the bark of trees in the laurel family.

However, several species of tree can produce this bark, and the resulting products vary in fragrance and chemical composition.

Cinnamomum cassia, sometimes referred to as cassia or Chinese cinnamon, is the most common and commercially-available type in the United States and East Asia. In Chinese, it is known as guì pí (桂皮) or sometimes ròu guì (肉桂).

The cassia tree is native to China. However, it also exists in other East Asian countries. (Most of the cinnamon in the U.S. comes from Indonesia.)

We may think of cinnamon in American desserts like apple pie and cinnamon rolls. But 99% of the world’s cinnamon comes from Asia––Indonesia, China, Vietnam, and Sri Lanka.

Because the U.S. Food and Drug Administration does not heavily regulate cinnamon sourcing and manufacturing, it can be difficult to tell which kind you’re buying. The other commonly-used variety, Cinnamomum zeylanicum or Ceylon cinnamon, is native to Sri Lanka.

Compared to Ceylon, cassia looks a bit more like tree bark; it is thicker, coarser, and more grayish-brown. Cassia is also more pungent and carries the spicy, bittersweet aroma most of us associate with cinnamon. The flavor of Ceylon is more delicate and floral.

You can usually differentiate cassia from Ceylon by looking at the shape of the twig-like “quills” they produce.

The dried bark of cassia cinnamon curls inward from both sides, forming thick, scroll-like pieces. Ceylon cinnamon forms into a single spiral of many layers that are smooth, brittle, and a lighter golden-brown in color.

Additionally, cassia cinnamon packaged for Chinese markets look a little different than the kind found in the spice cabinets of most Western kitchens.

The cinnamon sticks you’re probably familiar with come from the inner bark of the tree when it is still young, resulting in tightly-curled quills.

The cinnamon you can buy at Asian grocery stores, however, is thicker and more mature. You can find it in the form of twigs (guì zhī) that have been sliced into small segments. More commonly, however, we buy thicker pieces (ròu guì), which may have a visible outer “skin” that resembles tree bark.

How Is Chinese Cinnamon Used?

Chinese cinnamon can add just the right amount of spicy sweetness to a dish. It’s an important ingredient in preparing savory Chinese dishes as well as sweet ones.

In fact, while cinnamon is used more for baking and desserts in Western culinary cultures, it is much more common in savory cooking when it comes to Asian cuisine.

It may just be the first recorded spice used in Chinese cooking. In ancient China, it was primarily valued for its ability to spice and preserve jerky.

Chinese cinnamon is also one of the main ingredients in Five Spice Powder, which enhances many Chinese dishes with its perfectly balanced flavors. Take a look at our article on Five Spice Powder to learn more.

Chinese cinnamon is a great addition to braises, stir-fries, and stews. Dropping in a cinnamon stick provides a hint of sweetness that can balance out other savory ingredients, creating a rich flavor and aroma. Try it for yourself with a recipe like our Lu Rou Fan (Taiwanese Braised Pork Bowl).

Most of the savory recipes on our blog that use cinnamon will call for sticks or large pieces, rather than ground cinnamon, because the whole pieces offer a more subtle flavor.

What about cinnamon as health food? Today, you can find articles touting the health benefits of cinnamon on almost any wellness website. Recent research has demonstrated its anti-inflammatory and anti-microbial properties, among other purported uses.

While we aren’t nutritionists or doctors, it is interesting to note that Traditional Chinese Medicine (TCM) has utilized cinnamon for thousands of years.

With its powerful yang, or warming attributes, it has served as a treatment for a variety of ailments from nausea to joint pain.

Cassia is the most common and affordable form of cinnamon in the United States. You might even already have it in your spice cabinet! However, our family prefers to purchase Chinese cinnamon as the thick pieces of bark, which is unlikely to be available at your local grocery store.

If you cannot find Chinese cinnamon at an Asian market, numerous online merchants, like yamibuy.com, justasianfood.com, and mimodian.com, stock it.

When stored properly in an airtight container away from light and moisture, cassia bark can last up to four years. Ground cinnamon will lose its potency a little faster, expiring two to three years after purchase.

If you can’t find the bark form of Chinese cinnamon, or ròu guì, that we use in our recipes, you can substitute the regular cinnamon sticks more widely available in stores.

Our Favorite Dishes That Use This Ingredient