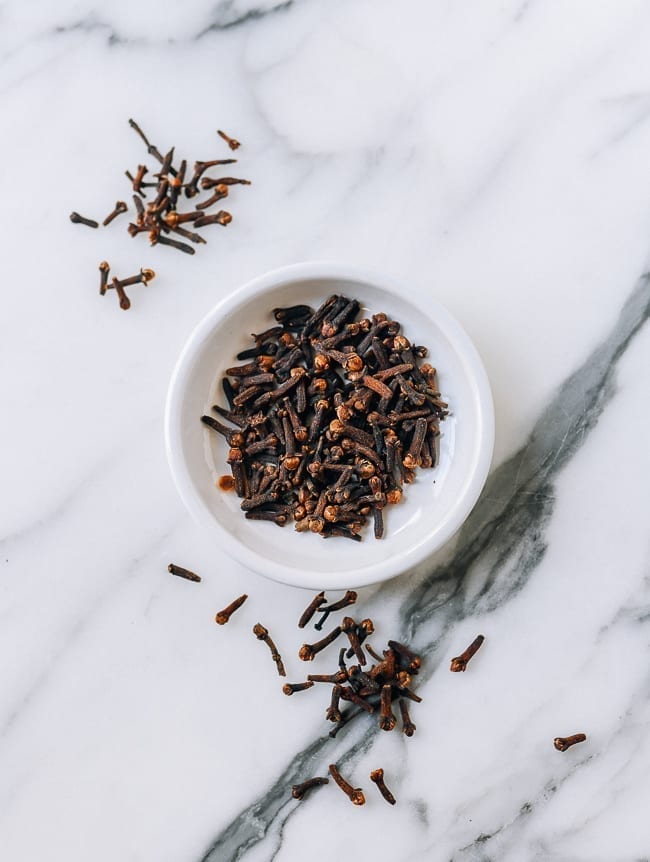 Cloves have been in use for thousands of years. Even before they became highly coveted by the Dutch East India Company, they were used in traditional medicine as a remedy for toothaches, arthritis, and more.

Actually, the history of cloves goes back at least as far as the third century BCE. Visitors of the Han Dynasty emperor would chew them to freshen their breath before addressing His Excellency.

Today, cloves make their appearance in sweet treats and savory dishes from East to West. We’ll tell you everything you need to know about them in this article.

Cloves (dīng xiāng, 丁香) are the dried flower buds of an evergreen tree in the myrtle family. Native to the Maluku Islands (once known as “The Spice Islands”) of Indonesia, they are now cultivated in several tropical regions, including India, Sri Lanka, and Madagascar.

The name “clove” is thought to have evolved from the Old French word “clou,” meaning nail, which may refer to its shape. When harvested and dried, they resemble small spikes with dark brown stems and bulbous heads.

Cloves are an intensely aromatic ingredient with a warm bitter-sweetness similar to that of nutmeg or allspice. Biting into a whole clove will result in a little heat and distinct astringency (drying sensation) on the tongue, which is why whole spices are often removed from dishes before they are served.

How Are Cloves Used?

Cloves appear in both sweet and savory recipes from around the globe. In Asian cuisine, they have a role in ground spice mixtures such as Chinese Five Spice Powder and garam masala.

Whole and ground cloves are ideal for adding depth to slow-simmered Asian dishes. Unlike many of the spices we use, they don’t always need toasting to bring out their aroma prior to cooking.

We grind them in a mortar and pestle to make our version of the Malaysian classic Beef Rendang and the marinade for our Grilled Tandoori Chicken.

Pre-made Chinese spice braising packets may include whole cloves along with other aromatic ingredients such as cinnamon, dried mandarin orange peel, and star anise.

We keep whole cloves in our pantry so we can create homemade spice packets as needed to flavor dishes like our Braised Beef Shank and Pho.

In recipes like our Roasted Braised Duck and Instant Pot Cantonese Braised Beef With Radish, we skip the spice packet altogether and simply drop a few cloves, bay leaves, and other aromatics into a liquid base of Shaoxing wine, and dark soy sauce and light soy sauce.

Cloves also have plenty of culinary uses beyond Asian cooking. We use them in ground form to spice Homemade Breakfast Sausage as well as our Smoked Turkey Legs, which rival the decadence of the ones at theme parks and festivals.

If you have a sweet tooth, cloves are a must-have for your spice cabinet. Seasonal treats like our Pumpkin Cupcakes and Butternut Squash Pie are irresistible with the spicy sweetness of ground cloves. And whole cloves make the perfect stems for our Pumpkin Mochi with Pumpkin Filling, which are almost too adorable to eat.

You can find cloves both whole and ground at most supermarkets as well as online. Some ethnic grocery stores may stock them at a lower price point.

They will keep whole for four to five years, or ground for two to three years. Keep them in an airtight container away from heat, light, and moisture to maximize their shelf life.