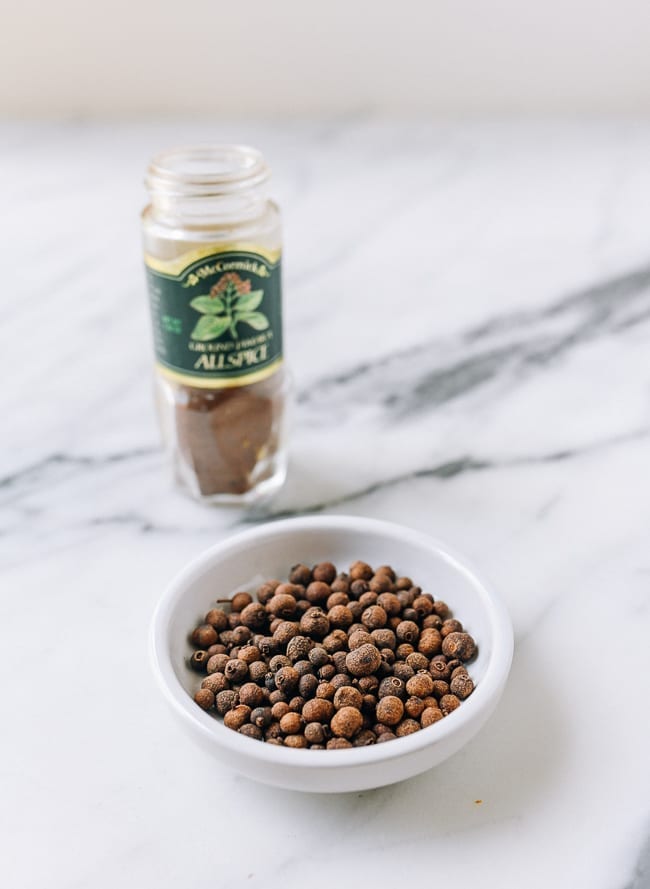 Though its name suggests a mixture or blend of different spices, allspice is actually just one spice with a warm and multi-faceted fragrance. We’ll explore how it is used in cooking in this article.

Allspice is the dried berry of a tropical evergreen tree called pimenta dioica, which is native to the Caribbean, Mexico, and Central America. The green berries are harvested before they fully mature and are traditionally sun-dried, turning them brown and fragrant.

Whole, dried allspice berries resemble peppercorns in appearance. In fact, Christopher Columbus thought they were peppercorns when he first brought them back to Spain in the late 15th century, and for this reason allspice is still sometimes referred to as Jamaican pepper.

English colonizers are credited with coining the name “allspice” in the 1600s. The dried berries evoked the aroma of cloves, cinnamon, and nutmeg. The bouquet definitely resembles a combination of these other spices, while its flavor is pungent and warm, with peppery notes.

How Is Allspice Used?

Allspice is primarily used in Caribbean and Latin cuisine. However, its unique flavor can be found in both sweet and savory dishes from all over the world.

One of the earliest known applications of this spice was by the Arawak Native Americans of the West Indies and Central America. They would use it to spice meat that was cured using a wooden stick framework called a boucan.

The European explorers who learned to cure their meat in this way became known as “boucaniers,” which eventually evolved into “buccaneers.” This is also thought to be the origin of the Spanish word “barbacoa,” which is where the word “barbecue” comes from.

Today, allspice continues to be a key ingredient in dry-rubs and marinades for roasted meat dishes like Jamaican jerk. Lamb is marinated with allspice, cumin, ginger, chili powder, and other flavorful seasonings in Kaitlin’s hearty recipe for Caribbean Spiced Lamb Stew. Allspice may also be used to flavor curry, chutney, and pickling brines.

Allspice is readily available at most supermarkets in the spice aisle. You can purchase the dried berries whole or pre-ground. We recommend buying them whole and grinding them yourself at home with a spice grinder or mortar and pestle.

This is preferred because as with other aromatic ingredients, the fragrance loses its potency much more rapidly when ground.

Whole berries will last up to 3-4 years when kept in an airtight container in a cool, dry place.