by: Sarah
13 Comments
Jump to Recipe 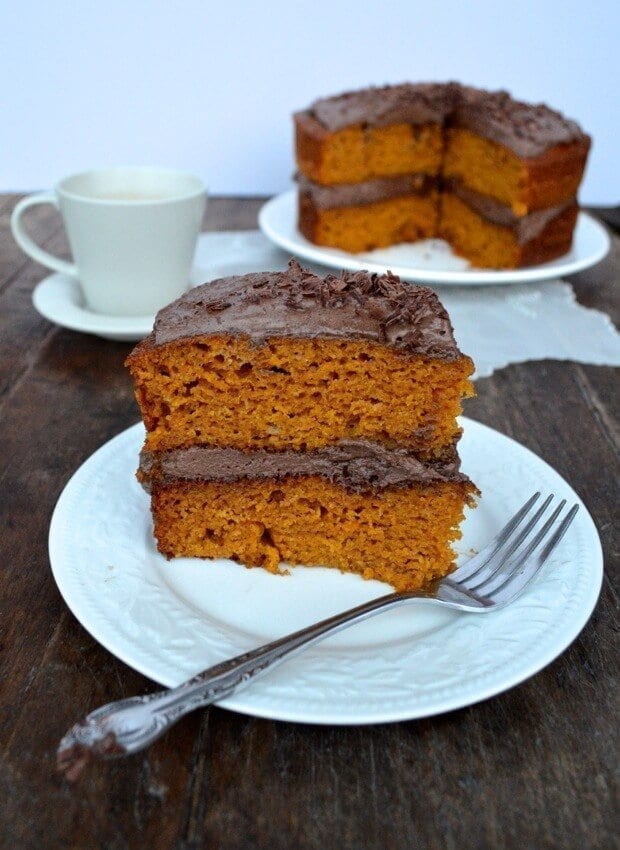 It lights up my life. It’s the wind beneath my wings. It has made it into the pantheon that is my top five list of best cake recipes of all time. I mean, come on. A pumpkin cake, with Mexican Chocolate Whipped Cream? Ba-BAM.

It was, in actuality, an accident. We had a carton of cream in the fridge, set to expire in a couple days, which was bad news bears. Because cream is expensive here. So I wasn’t about to let it go to waste.

After hastily giving the cream a good whiff and the all-clear, I decided to make my go-to pumpkin cake recipe, but with a whipped cream instead of the usual thin layer of cream cheese frosting, which is always good, but—and I say this with the greatest affection for cream cheese frosting—nowhere near as good as the aforementioned Mexican chocolate stuff.

It’s light, fluffy, and creamy, and the subtle chili notes are going to make you wonder why you’re not adding chili to chocolate ALL THE FREAKIN’ TIME.

Speaking of pumpkin, this pumpkin cake recipe was developed over much trial and error, and I can confidently say that it’s probably the best I’ve ever had or will have. It’s elicited its fair share of “Oh my good lord’s” and “Holy Sh*t’s”–from those potty-mouths I’ve made it for, and I’m immensely proud of each and every curse word it’s gotten.

It’s moist, light, and perfectly spiced. It works as just a plain sheet cake, as cupcakes, or even a pumpkin coffee cake, if you throw some crumbled butter, flour, and brown sugar on top. (And why wouldn’t you?) Use it as a base for all your pumpkin-y dessert desires.

So I know Spring is around the corner and all, but I’m just not ready to give up my pumpkin. This isn’t by any means my last hurrah of the season, either. We’ve got like…six tupperware containers full of the stuff waiting patiently in the freezer. Which is good, because we’ll be making this again at some point. And so–my clairvoyant Chinese fortune tellers inform me–will you.

Preheat oven to 350 degrees. Grease and flour a 9×13 inch sheet pan or 2 round cake pans (do this up right, or can stick! With the reigning title of THE moistest pumpkin cake in the whole wide world, it needs lots of Crisco and/or butter and/or PAM insurance).

Whisk together the flour, baking powder, baking soda, salt, and spices. In a separate large bowl, combine sugar and oil. 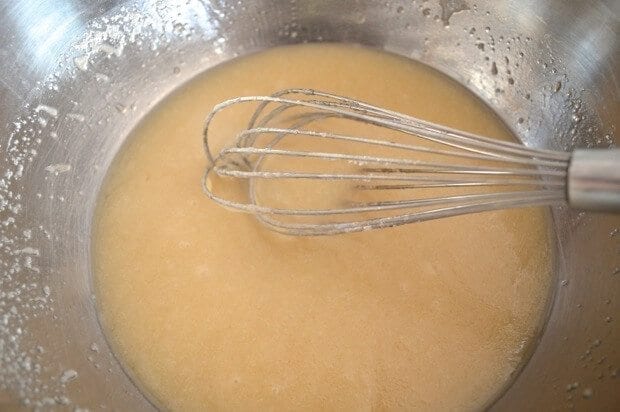 Stir in yogurt, vanilla, and pumpkin. 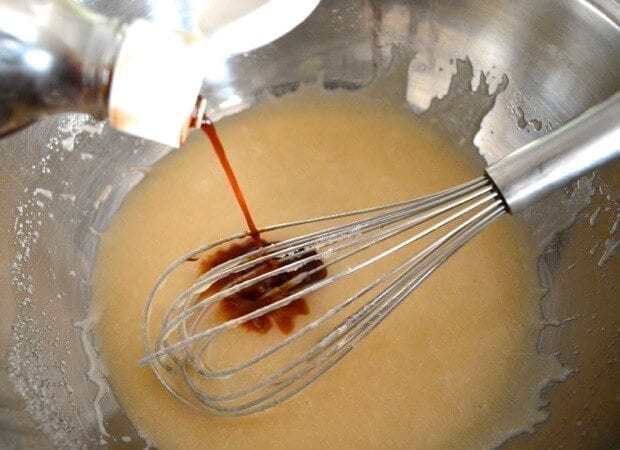 We’re big advocates of fresh pumpkin puree (just buy a nice sugar pumpkin, or even a butternut squash, steam it, and puree it). But the canned stuff will do you fine too. I’m pretttttyyy sure that our friend Libby’s doesn’t quite possess this amazing orange color, but she’ll help you out when it’s not pumpkin season. 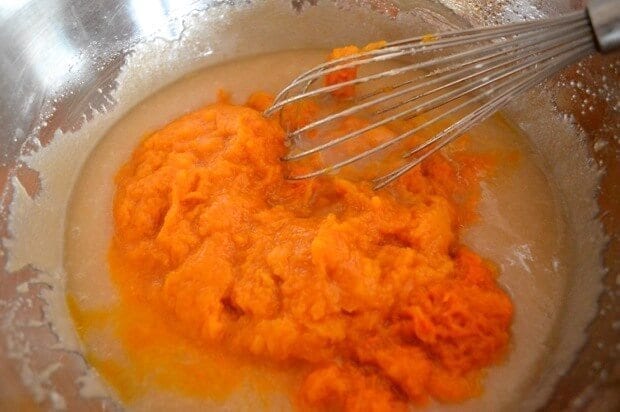 Beat eggs in one at a time, mixing very well after each addition, lest you end up with a bizarre eggy mess at the end of all this. Once the eggs are well-incorporated, gradually add the flour mixture to the wet ingredients.

…Or just dump it all in and fold it. What am I doing telling you to “gradually add the whatever…” when I essentially just dumped it all in like an impatient five-year-old? I don’t know why I try to sound all fancy and responsible-baker-y when I’m writing these dessert posts. Just mix it. 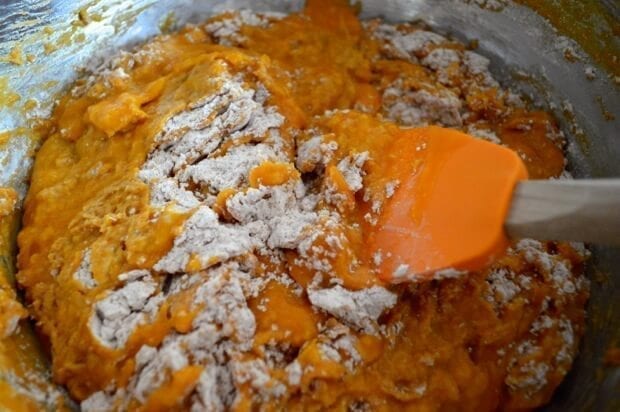 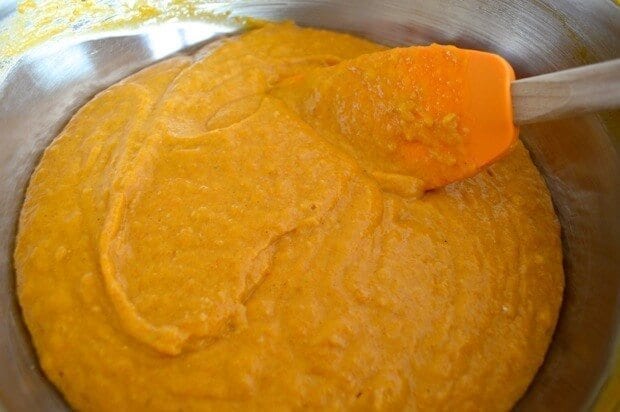 While the agonizingly long cooling process is happening, melt the chocolate chips (with either a minute in the microwave or a double boiler) and allow the chocolate to cool a bit on the counter. You can also use bittersweet or dark chocolate, but if you do, we suggest adding a tablespoon of powdered sugar to the cream to balance things out.

Another tip: if you want to speed up the cake-cooling process, you can let the cakes cool a bit when they come out of the oven, and then just throw ’em into the freezer for 30 minutes or so.

Considering that I started assembling this cake around 3:30 PM, and I had only an hour of natural light left by the time it came out of the oven for photo-taking purposes, I’m speaking from frantic, harried experience. All that kitchen hysteria? For you, my dear readers.

Now it’s time to transform your cream into Mexican-ish deliciousness. Whisk together the heavy cream, cocoa powder, cinnamon and chili powder. You can taste it and add a bit more chili if you like! 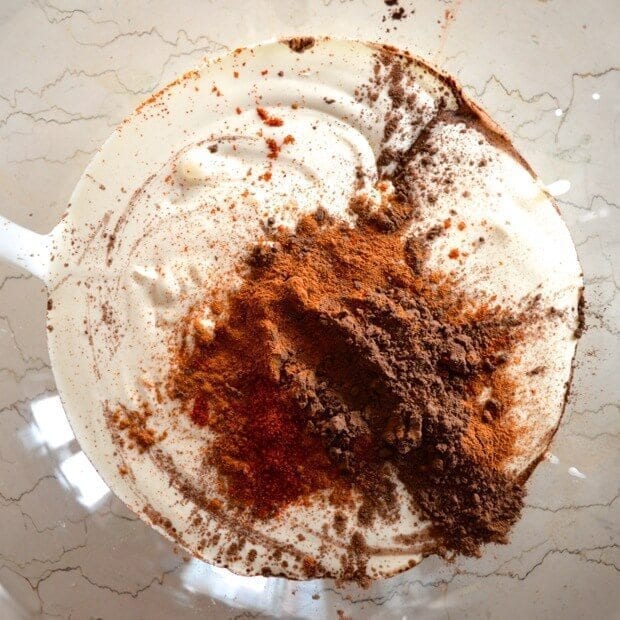 Whip just until the cream reaches the “stiff peaks” stage. In a large bowl, carefully fold about half of the cream into the chocolate, to temper it. 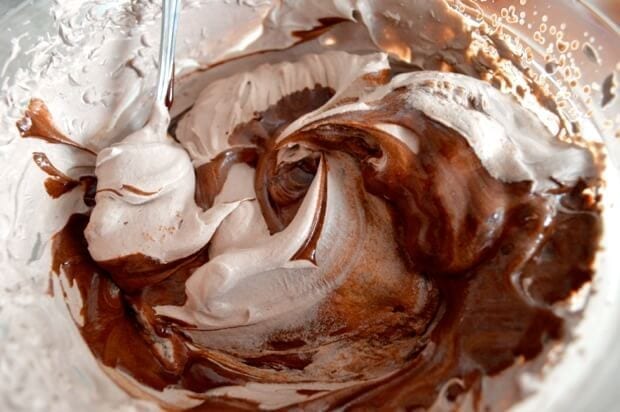 Then fold in the remaining cream. Keep folding until unreasonably luscious. 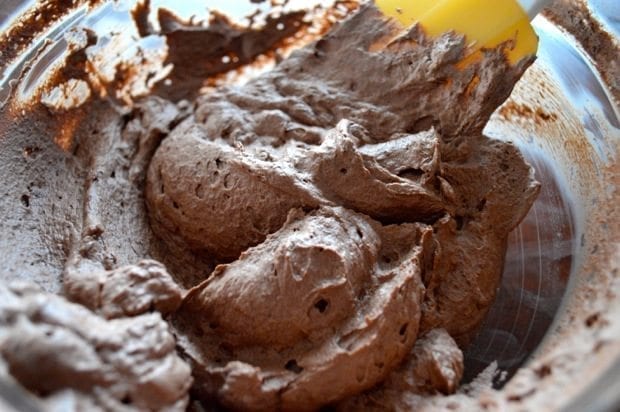 When the cake is completely (and we mean COMPLETELY) cool, layer the cream in the middle and on top of the cake. I’ve frosted warm cakes in the past and left the kitchen, only to come back to find the top layer flopped over onto the counter like a drunken sailor. Heed my words! 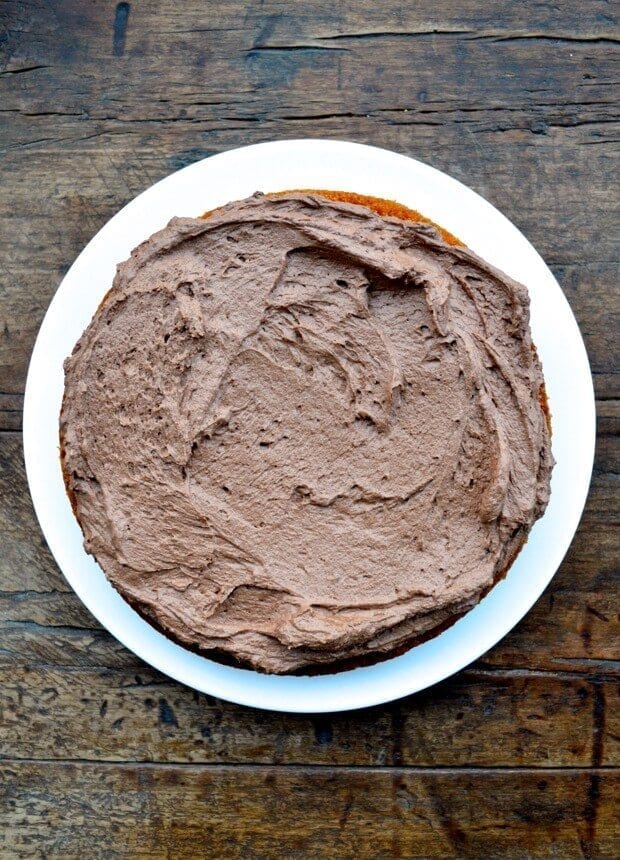 Garnish with chocolate shavings, if desired. 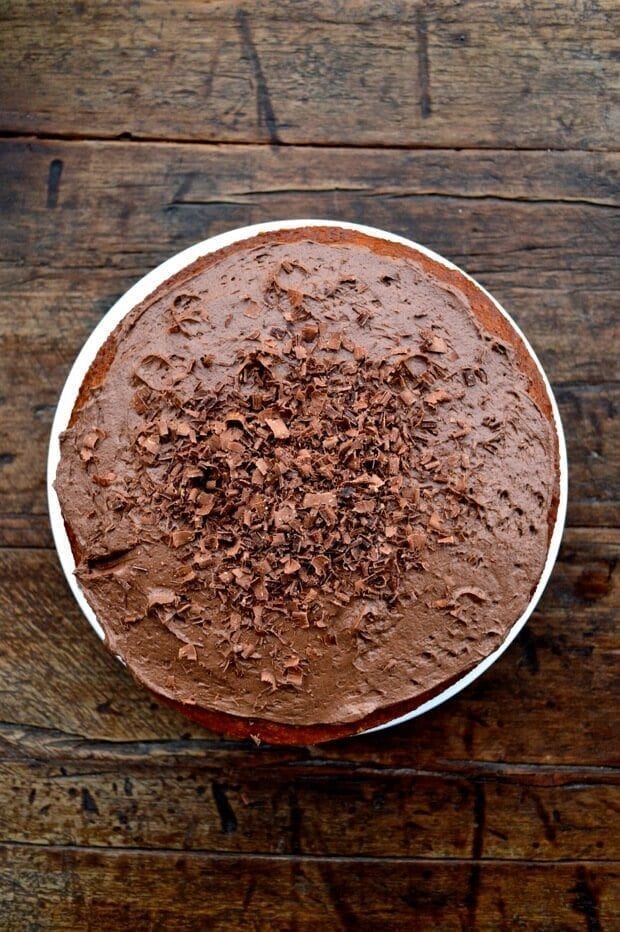 What I really like about this cake (besides the flavor party that it is) is its cake-to-frosting ratio. It’s not all…”hey, do you want some cake with that frosting?” If Goldilocks wandered into the Three Bears’s den and found this cake, she would give it her “Just Right” stamp of approval.

And then the Three Bears would probably go Wild Kingdom on her for eating it all. 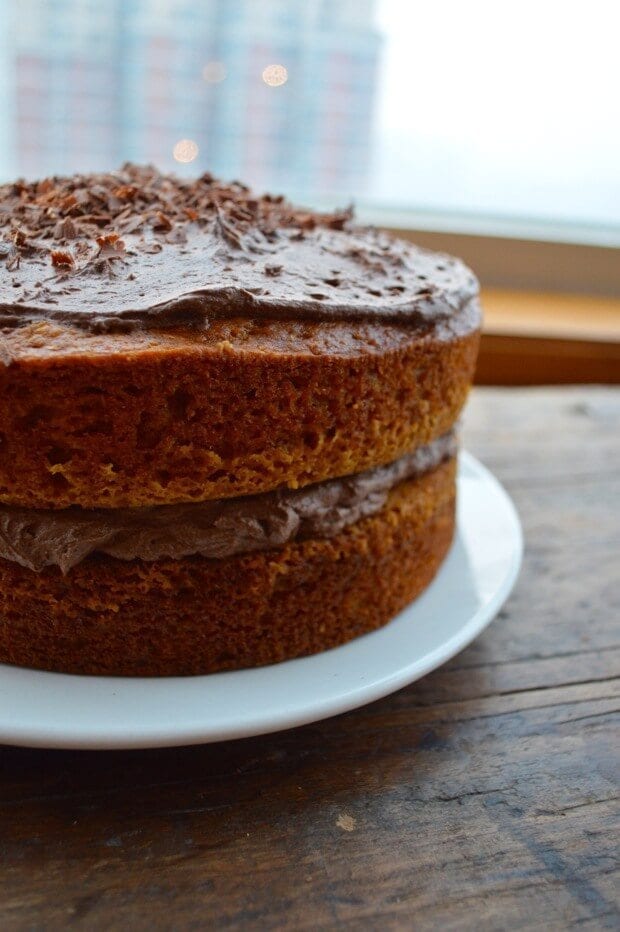 Slice your delicious cake up and serve it to your soon-to-be-very-happy friends and family. Use a sharp knife dipped in a little warm water, and it’ll slice up like butter. 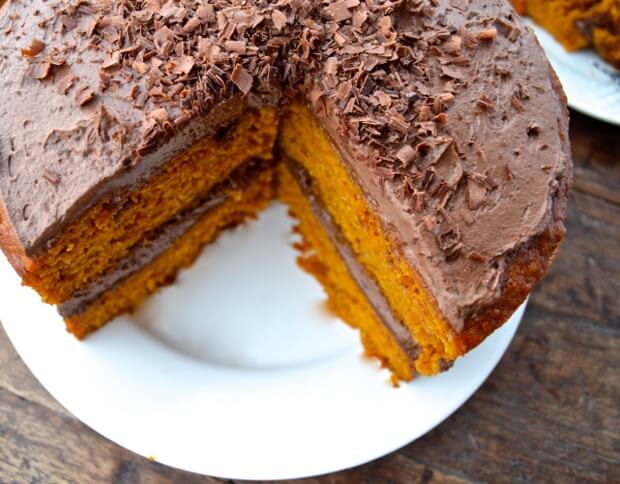 Also feel free to make this mexican chocolate whipped cream and add it something–anything–else. It’ll make friends wherever it ends up. 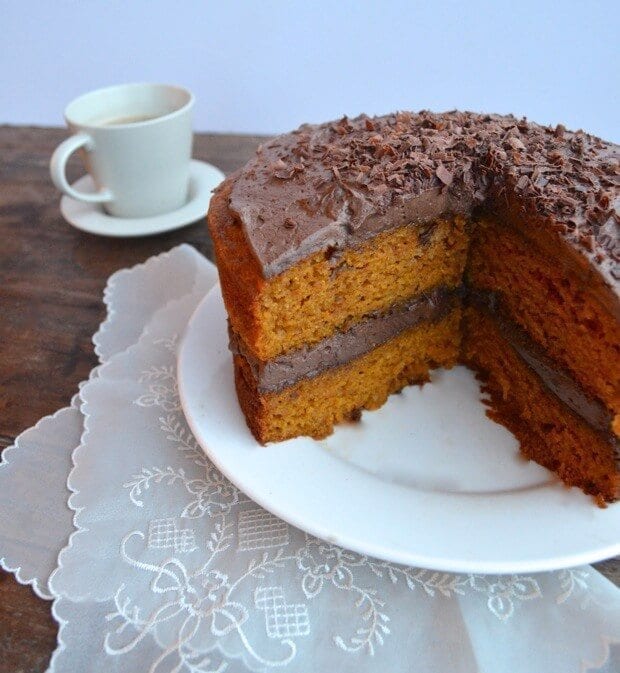 This pumpkin cake is incredibly moist and pairs perfectly with a subtly spicy Mexican chocolate cream.
by: Sarah
Course:Dessert
Cuisine:Desserts 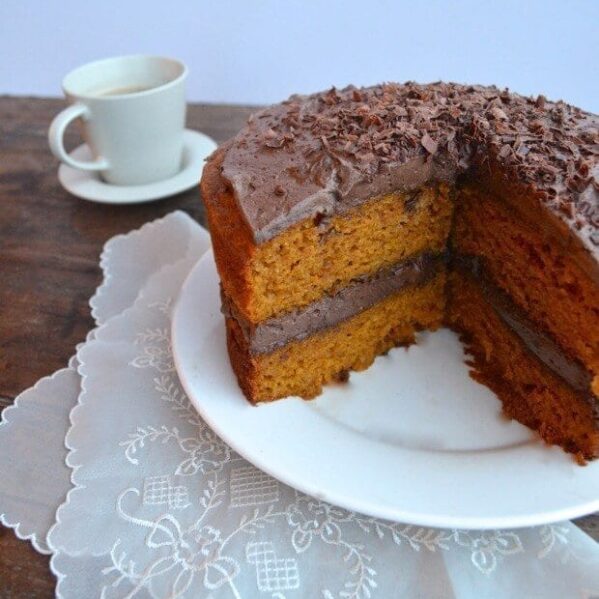 FOR THE WHIPPED CREAM: