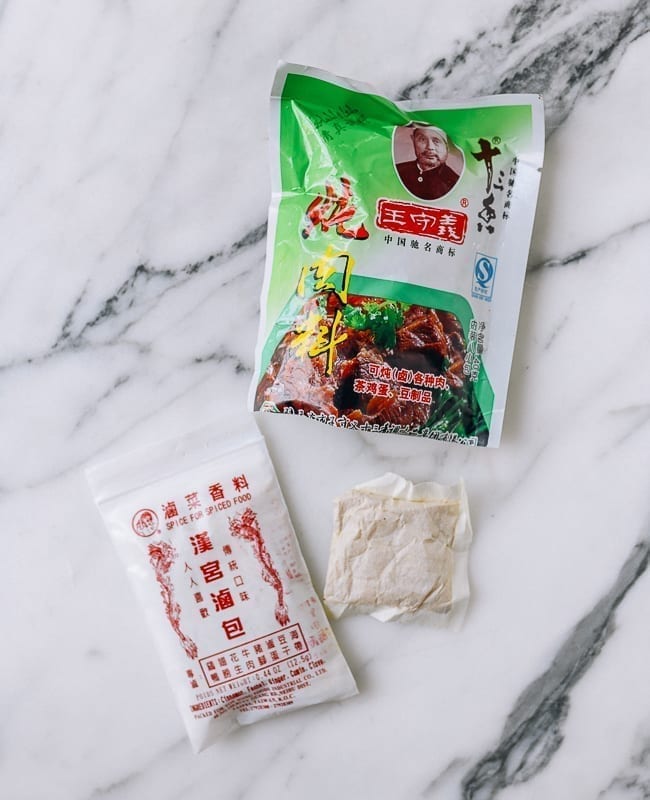 Some of our favorite authentic Chinese dishes are braised dishes. “Braising” simply refers to a method of slow cooking in liquid at low heat for an extended period of time, rendering any meat or vegetables juicy and tender.

Combine this method with an all-in-one packet of Chinese aromatics and spices, and you’ll have a fragrant and satisfying dish. We’ll go into more detail about Chinese spice braising packets in this article.

What Is A Chinese Spice Braising Packet?

A Chinese spice braising packet is just what it sounds like. It’s a pre-made, all-in-one packet of Chinese spices used to season the cooking liquid for braised dishes.

True to their name, Chinese spice braising packets are filled with aromatic ingredients. They turn otherwise plain ingredients into a symphony of complex fragrance and flavor.

The particular number and selection of spices in a store-bought packet varies from brand to brand. Some premade braising packets may contain more than 20 or even 30 different spices.

The pre-measured spices make seasoning quick and easy. Simply discard the outer packaging and drop the packet into the pot of liquid and meat. Bring it to a boil, and then turn down the heat, allowing the ingredients to simmer.

That said, we usually like to make our own spice braising packets with ingredients selected from our spice cabinet. After measuring out the desired amount of each spice, we usually tie them up into a little packet using a piece of cheesecloth and kitchen string.

For some recipes, like our Vietnamese Pho, we also toast the spices and aromatics in a dry pan prior to “packaging” them and placing them in the broth. For other noodle soup recipes such as Braised Beef Noodle Soup or our Instant Pot Taiwanese Beef Noodle Soup, we wrap up the spices and drop them into the pot as-is.

You can buy Chinese spice braising packets at your local Chinese grocery store or online. You’ll find them in packs of three or more sachets.

You’ll want to know which spices the packet contains and how many ounces of food you can cook with it. Don’t be afraid to ask the store manager for assistance with translating the characters on the package, or leave us a comment below, and we’ll do our best to help!

Store your Chinese spice braising packets in a cool, dry place away from heat and light. They should keep for about a year but will decrease in fragrance and potency over time, so it’s best to use them sooner rather than later.

If you can’t get ahold of a pre-made Chinese spice braising packet, we’d recommend making your own. Most recipes on our blog list the individual dried herbs, spices, and aromatics that would make up a store-bought packet.

You can follow the links in our recipe cards to the ingredients glossary entry for each spice for more information about possible substitutions (since we know some of these seasonings can be tough to track down.)