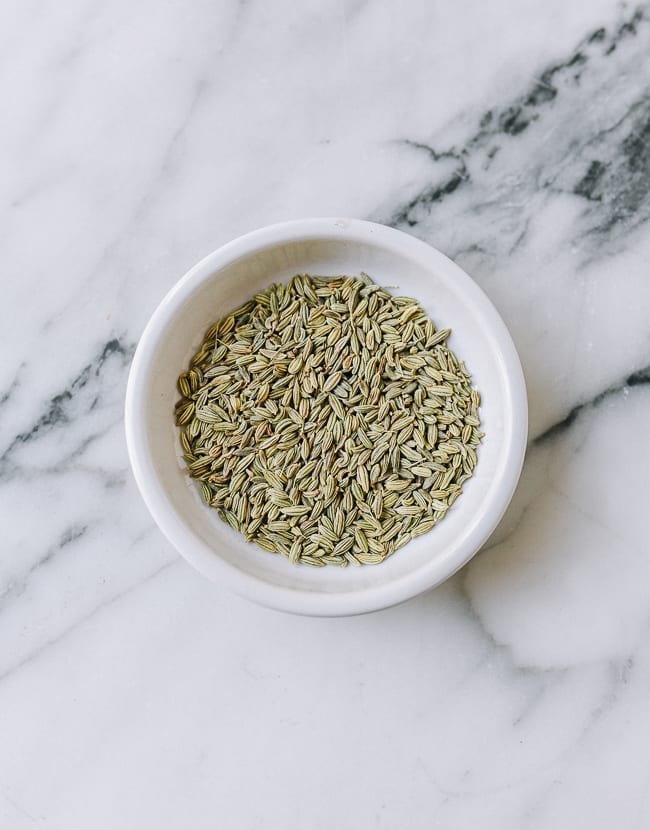 A spice cabinet staple, fennel seed is widely used in cooking around the globe. In fact, the fennel plant and its tiny boat-like seeds have seen numerous applications throughout history.

Ancient Greeks and Romans used fennel seed as an insect repellent and a supplement to enhance eyesight, among other uses. During his reign, Charlemagne decreed that fennel should grow in all imperial gardens because of its medicinal properties. Early Puritan settlers in North America chewed on fennel seed to curb hunger pangs during long church sermons.

According to traditional Chinese medicine (TCM), fennel seed has warming or yang properties. You can use it to treat maladies like abdominal pain and loss of appetite.

We don’t claim to be experts on TCM. But we can say for sure that fennel seed contributes to the warmth and richness of some of our favorite dishes. In this article, we’ll tell you everything you need to know about using fennel seed as a seasoning.

What Is Fennel Seed?

Fennel seed, or huíxiāng zǐ (茴香籽), is the fruit of a flowering herb that comes from the same family as carrots and parsley.

The fennel plant is believed to be native to the shores of the Mediterranean region. It is now cultivated internationally and even grows wild in many areas of North America, Northern Europe, Asia, and Australia. The leaves and celery-like stalks and bulbs of the fennel plant also have many culinary uses.

Small, oblong, and pale greenish-gray in color, fennel seeds are sometimes confused with cumin and caraway seeds because of their similar appearance.

The flavor of fennel seeds is slightly sweet and reminiscent of licorice, causing some people to mistake fennel for anise (or aniseed). However, fennel seeds are considerably less pungent than cumin or anise.

How To Use Fennel Seed

Fennel seeds are fairly versatile due to their unique but mild flavor. They complement other spices well, so it’s not surprising that one of the most common uses for fennel is in Asian spice blends like garam masala, Chinese five spice powder, and an Indian spice mixture called panch phoron that also includes fenugreek, cumin, and mustard seed.

In our kitchen, we often pair fennel seed with other aromatic ingredients like star anise, cinnamon sticks, dried orange peel, and licorice root.

To some Westerners, a combination like this may sound like a recipe for dining table potpourri. To us, it amounts to a complex and flavorful spice blend that forms the base of recipes like our Braised Beef Shank and Lanzhou Beef Noodle Soup.

We fell in love with this “spicy-numbing stir fry pot” when we were living in Beijing. The tofu bean threads, wood-ear mushrooms, shiitakes, and sliced lotus root absorb the flavors of dried spices and aromatics when stir-fried, resulting in a dish that is spicy and hearty (even without adding meat, fish balls, or other animal proteins—vegans and vegetarians, rejoice!)

Fennel seed is often a key ingredient in sausage. We lightly toast fennel seeds with black peppercorns and use a mortar and pestle to grind them along with dried rosemary, sage, and time to make our Homemade Breakfast Sausage, which makes rolling out of bed on a Sunday morning so, so worth it.

You can find fennel seed in the spice section at most grocery stores. Find them freshest and cheapest at Indian groceries. You can also purchase the seeds in bulk from a number of online retailers. However, we’d only recommend this if you use it frequently.

When stored in an airtight container away from moisture and sunlight, whole seeds will keep for about 3 years.

Pre-ground fennel seed, like most ground spices, will start to lose its aroma and flavor after 1 year. For this reason, we recommend investing in a mortar and pestle to grind whole spices fresh for each use.