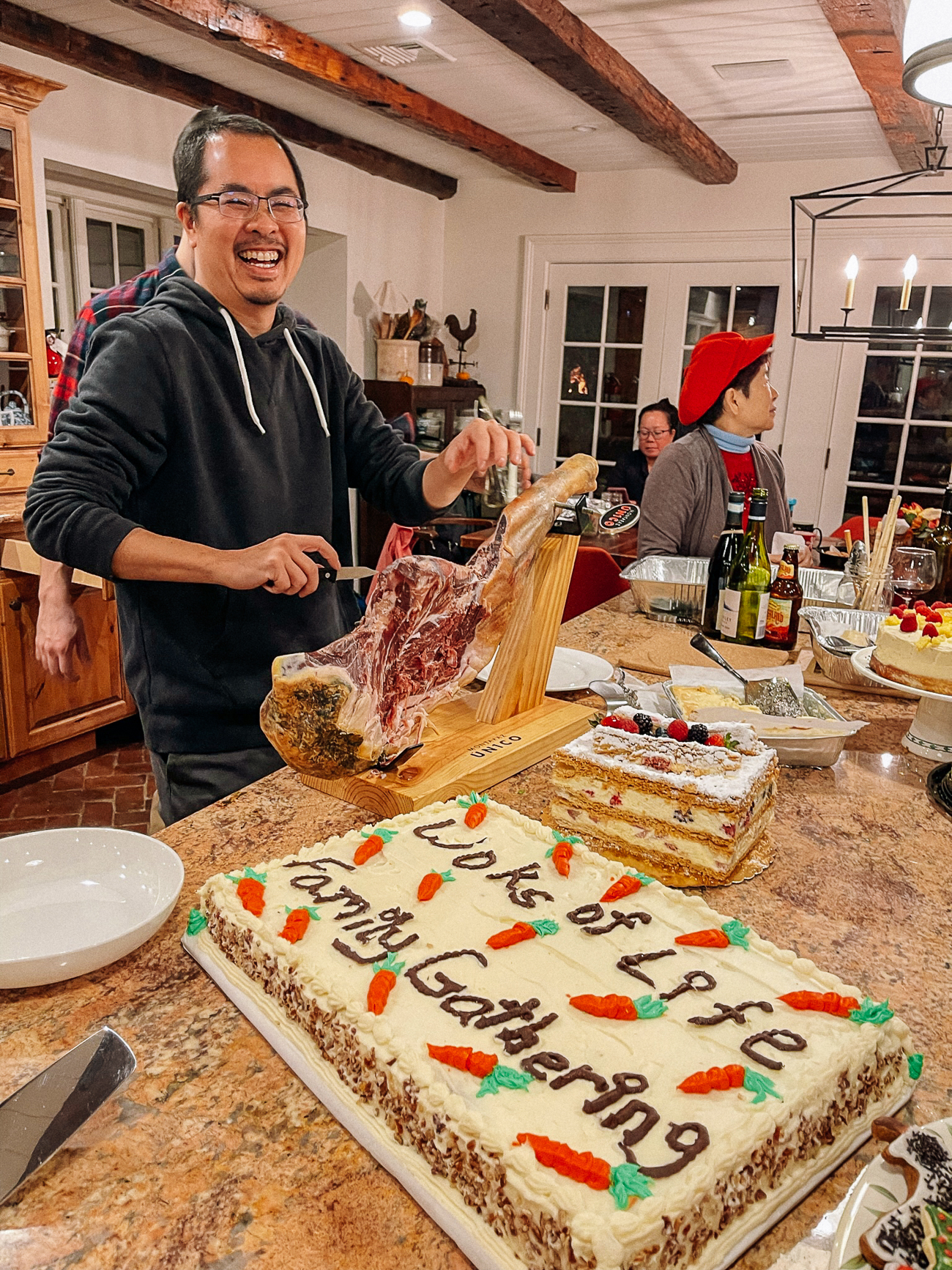 Earlier in the fall, we knew we wanted to have a family gathering, but we weren’t sure we wanted to take on the task of cooking that big of a spread.

We fell back on the classic pot luck model, but with a twist. Hence, The Woks of Life Family Cooking Competition!

The “rules” were simple—pick any recipe from The Woks of Life and bring it to the party! At the end, the crowd would pick a winner.

(The original plan was for the elders of the family to judge. However, we couldn’t pull them away from the mahjong table to focus on deliberations…)

This would give us a chance to come together as a family, share recipes and cooking traditions, and spread out the work of putting together a party buffet.

Of course, the best laid plans can sometimes go rogue, so the competition was definitely made interesting by a few substitutions here and there!

As family members rolled in, we had a few recipes up our sleeves too.

The Line-up of Contenders

So what did everyone make? Here’s the rundown:

Pineapple Buns: Our cousin Tony had perfected these over the course of lockdown—but a misstep on underbaking may have cost him a win!

Hakka-Style Chinese Stuffed Tofu: Our cousin Winnie made these like a champ—from execution and presentation, to coming prepared with her own steaming equipment, and she rallied from an unforeseen lack of oyster sauce for the dipping sauce. It was a strong showing all around…

Pho (Vietnamese Noodle Soup): Our aunt/Bill’s sister (Ginny) made this recipe—a consistent favorite of hers. It was out on the buffet first, and ended up being a welcome snack for early arrivals. But while the judging took place, she got distracted at the fire pit in the yard. Would it cost her the medal? Or would the recipe stand on its own come judgment time?

Taro Puffs (Wu Gok): A secret recipe from our upcoming cookbook! Our cousin Eddie has been a great tester for the more complicated recipes in the book, and we entrusted him with this one…Eddie spent most of the party standing over a pot of frying oil, and people plucked taro puffs off of the cooling rack about as fast as he could fry them. But would the crowd give their approval?

1-2-3-4-5 Ribs: A classic and easy recipe that we love—but a polarizing choice for a Cantonese family (cousins Sunny and Lotus) who doesn’t enjoy their food as sweet as Shanghainese folks do!

Red Braised Pork Belly (Hong Shao Rou): The youngest contributor to our competition, Lucas, (Eddie’s Son and our family’s next generation!) fastidiously made our classic Hong Shao Rou, though little did he realize that Judy was making her own batch! It’s a tough act to follow. Would it be A for effort?

Instant Pot Braised Curry Beef: From cousin Nellie, a strong contender with a flawless execution of one of our all-time favorite recipes on the blog. We served it on the buffet in the Instant Pot to keep it warm!

Shrimp with Lobster Sauce: Another well-executed dish from cousin Debbie! You can’t go wrong with the classics, but would it be enough to win the competition?

Oyster Sauce Baked Chicken Wings & Drums: Our cousin Cynthia (Jorge’s wife) and Cathy literally picked the first recipe they found on the day of, which happened to be these Oyster sauce chicken wings. Luckily, Cathy used the recipe to make a huge pan of drumsticks to feed the crowd. The substitution was just as good as the original.

Steamed Pork Buns (Baozi): We’re not sure who made these (we think Brianna, cousin Jorge’s daughter), but they were a bold choice for this competitive forum with a tricky wrapper and a tricky filling.

Carrot Cake: Our favorite carrot cake recipe ever is on the blog, but my dad’s oldest sister, Wai Chee, couldn’t resist modifying it with her own adjustments, including carrot puree in addition to shredded carrots. It turned out just like a deliciously moist bakery carrot cake!

There was also a pineapple glazed ham, which while rogue, from cousin Cynthia, was welcome and quite delicious!

There was another addition—an Iberico ham leg from our cousin Eddie. He owns his own wine bar and restaurant in Manhattan, One19 Wine Bar + Food, which has yummy bites like French bread pizza and wine tasting flights.

It was a tasty, elaborate dinner. The kitchen’s ovens, steamers, woks, and fryers were all going at once to get it on the table!

We were also presented with a gift from our cousin Sunny and his family—a commemorative sign marking the blog’s founding!

So Who Was the Winner?

In the end we trotted out the grand prize. A medal for the winner of The Woks of Life family cooking competition! (And bragging rights.)

(Ok so I was supposed to go out and get a mini trophy, but forgot, so I had to fish a middle school science fair medal out of my junk drawer. Oopsie!)

In the end, we conducted the judging by volume of cheers, and the prize went to…

In the end cousin Eddie’s effort spoke for itself—AND he had the edge of using an as-yet-unreleased cookbook recipe.

The winner got bragging rights for life…and a janky middle school science fair medal to boot.

In the spirit of family competition…

For any of you competition junkies, next we’ll be thinking about our Top 20 Recipes of 2021 roundup. We’ll compete amongst ourselves for whose recipes reigned supreme over the course of the year!