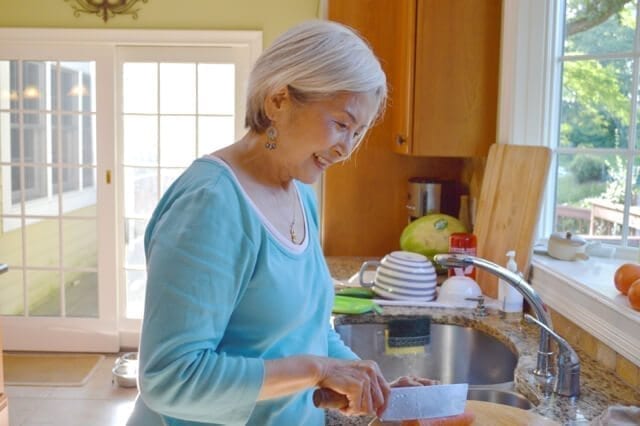 Every so often, my grandparents will come to the house to visit (i.e. check up on me), because my grandmother wants to make sure that I’m not slowly going crazy living solo (she also calls me daily…you know, just to make sure).

She also seems to be under the impression that I am somehow forcibly starving myself either by deciding to eat vegetarian some nights (she’s a big believer in the idea that eating just vegetables won’t cut it. A big meat-eater, my grandma) or by bringing my penny-pinching tendencies into the grocery store (what’s the harm in saving a little money, people!?).

And that is a very good thing for YOU, my friends. Because upon finding out about this food blog, my grandmother immediately went to work writing down all the recipes she wanted to cook on her latest visit, and we made a bunch of different dishes while she was here. Everything from her version of braised Shanghai-style pork belly to a light summer cold tofu salad. These are dishes that I’ve grown up with, and they come from the old gal herself.

My grandparents were both born in 1940, which means they lived in the midst of the Cultural Revolution in China. So yeah, they didn’t have much in the way of food. There are a couple of old stories involving a salted pig head and a tragic story about a couple of REALLY special ducks that got away (like literally…they ran out the door and flew away), but mostly, their diet consisted of vegetables and starches. To this day, my grandma hates eating sweet potatoes because she ate so much of them during this time in her life. They came to the states in the early 80s, and let’s just say that their first trip to the local grocery store was a pretty huge culture shock for all involved.

But that was then and–thankfully–this is now. And at present, we have been making a LOT of food. I’ll be posting the recipes we made over the next few weeks, along with some of the other stuff that we make along the way, of course. I’ll let you know if it’s a “grandma” recipe, so that you can know to pay extra attention.

Now, if you’ll excuse me, I’ve got some leftovers to tackle.