A Primer in Puppy Obedience 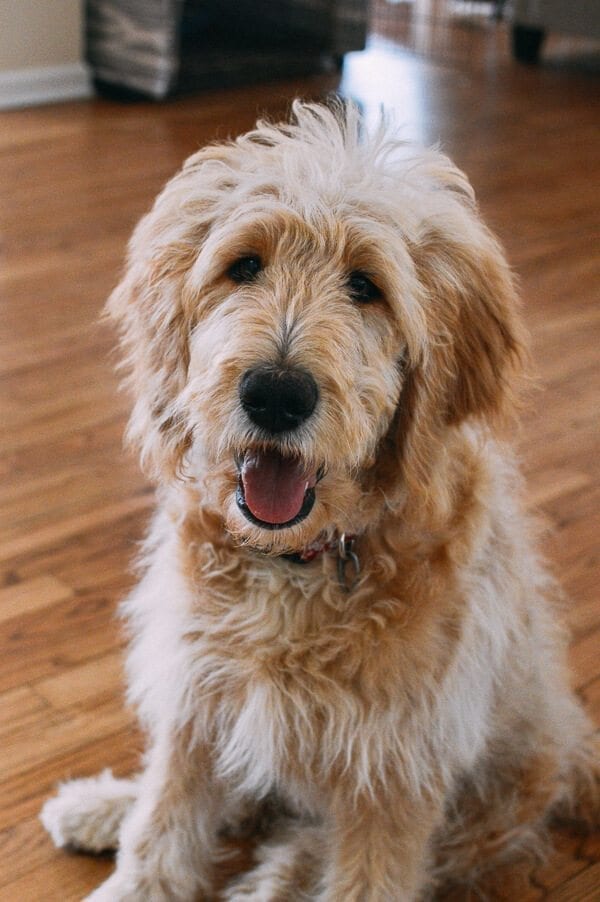 Puppy obedience has, at times, felt like a vast ocean on which we are just a tiny wooden raft bobbing along, trying to steer with nothing but a milk bone and a tired chewed up leash in hand. Puppies are indeed cute, but they are by no means an easy job. We’ve compiled a list of handy commands that we cobbled together from our obsessive reading and internet perusing since bringing Barley home. They’ve been invaluable for us, and we hope our experiences can help any struggling new puppy parents out there!

If you’re wondering why this little fluffer-nutter is showing up on what seemed to be just a food blog, check out our other posts in the Bringing Up Barley series!

The puppy version of “please.” After lots of repetition, this eventually became a reflex for Barley whenever she wanted something from us or when she wanted to do something. Want to go outside? Sit for it. Want to have your kibble? Sit for it. Want a piece of crispy pork skin? Yep. Sit for it. Also, holding the treat higher over her head makes her naturally sit as she cranes her neck to look at whatever it is you’re holding.

This is a no-brainer (ha. ha…ha.), but crucial to establish early on. We spent a fair amount of time wondering if we were being too strict too soon (puppy dog eyes are real and can make you feel like a terrorist), but if your puppy starts acting out, that’s the time to introduce it into your repertoire.

Of course, it’s just as crucial to give your puppy a key phrase to let them know they’re living their best life. This phrase works wonders for Barley. Sometimes we’re so relieved that she stops misbehaving after we say “no,” that we forget to praise. But let your little ball of fluff know that they’re doing all right! Barley is a little people-pleaser most of the time and loves hearing how wonderful she is. 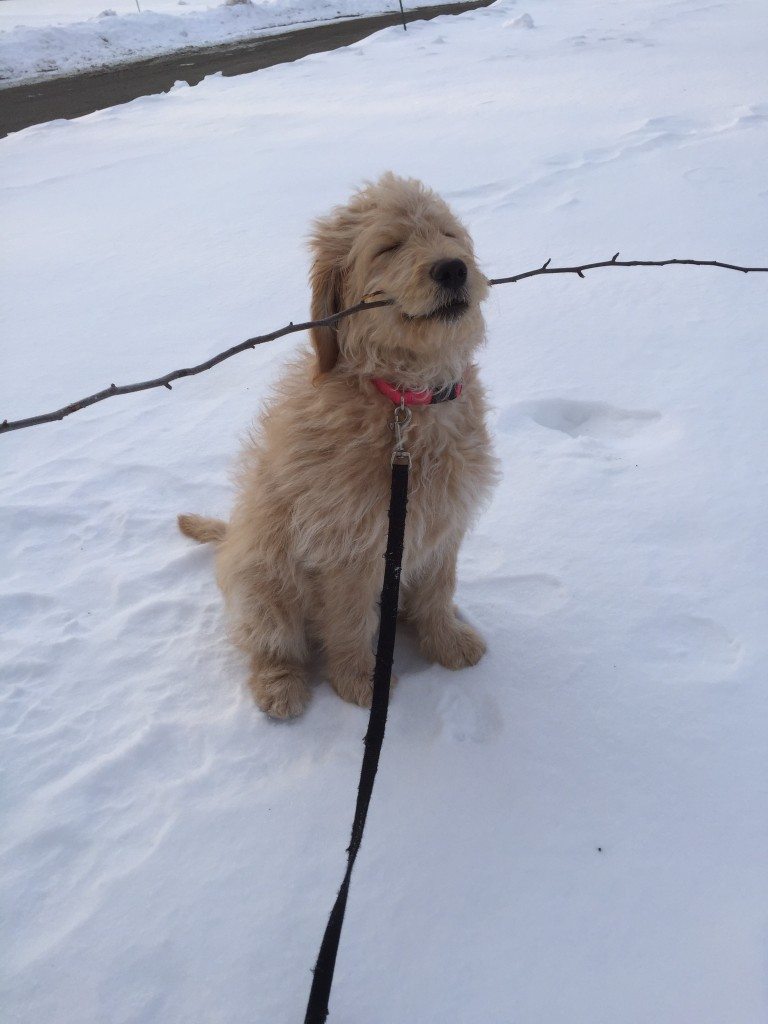 Getting Barley to reliably come when called took a lot of repeated daily training and treats. We used a treat cup to start–she hears the treats jangling around in a paper cup and comes running. Just as important was to make her want to come to us–we clapped our hands, tapped the floor, and lavished affection when she tumbled and kersplatted into our arms. “Come” should never be used for discipline; if Barley misbehaves, we go to her. You don’t want any negative associations whatsoever with the “come” command.

This was trickier to do and we’re still fine-tuning it. We find that a hand in front of Barley’s face helped reinforce the message. Try to work in some strange configurations (e.g. walk around your puppy in circles, go into the other room, walk back and forth between rooms, etc.) so your puppy can build up self-control.

Barley, unfortunately, doesn’t have much self-control for the down command. She loves stretching out on the floor, but doesn’t really get the whole idea of doing it on command. A downward hand motion with a treat in hand got the ball rolling, though, and when in doubt we just gently moved her into the down position by moving her front legs. 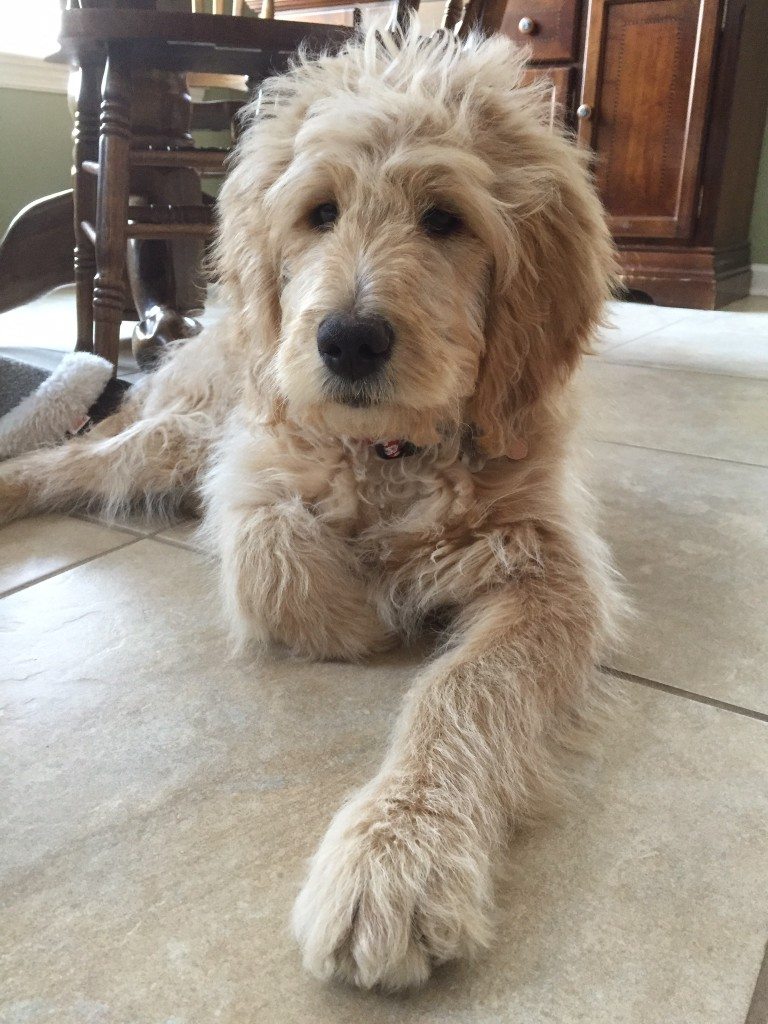 In typical Bratty Barley fashion, Barley wants to know what’s going on at all times, who’s doing what, and where everything is. She started developing a bad habit of jumping up to see what was on tables, the counter, and even the stove! Of course this is, not only a dangerous pre-cursor to the scene where the dog steals the Easter Ham/Thanksgiving turkey right off the table but also dangerous period, when it came to hot pans and kettles of boiling water sitting on the stove. Now when she tries to climb up, a quick and firm “Off!” does the trick.

We never really used this command with Jake but we wish we had. “Watch me” was just on a dog Jedi mind-trick kind of level that we never even thought to go too. It makes the dog reorient their attention on you by making eye contact. They’re looking to you for cues and what to do next. We use this during meal times and fetch sessions when we want to snap her out of a food or tennis ball-induced trance.

Since we got Barley, we’ve incorporated “sit,” “stay,” and “watch me” during meal times. First, we have her sit and give her the “stay” command with the food in hand. Then we ask her to “watch me!” pointing at our eyes if necessary. When she makes eye contact, we put the food onto the floor. If she breaks the “stay” command, we immediately pull the food up, say “no,” and have her re-do the “sit” and “stay” commands. When she’s calm and attentive, we point to the food and say “okay,” which is her cue that it’s okay to start eating. This took a lot of patience and quite a few tries before Barley got the sequence down, but now we do it for all of her meals. 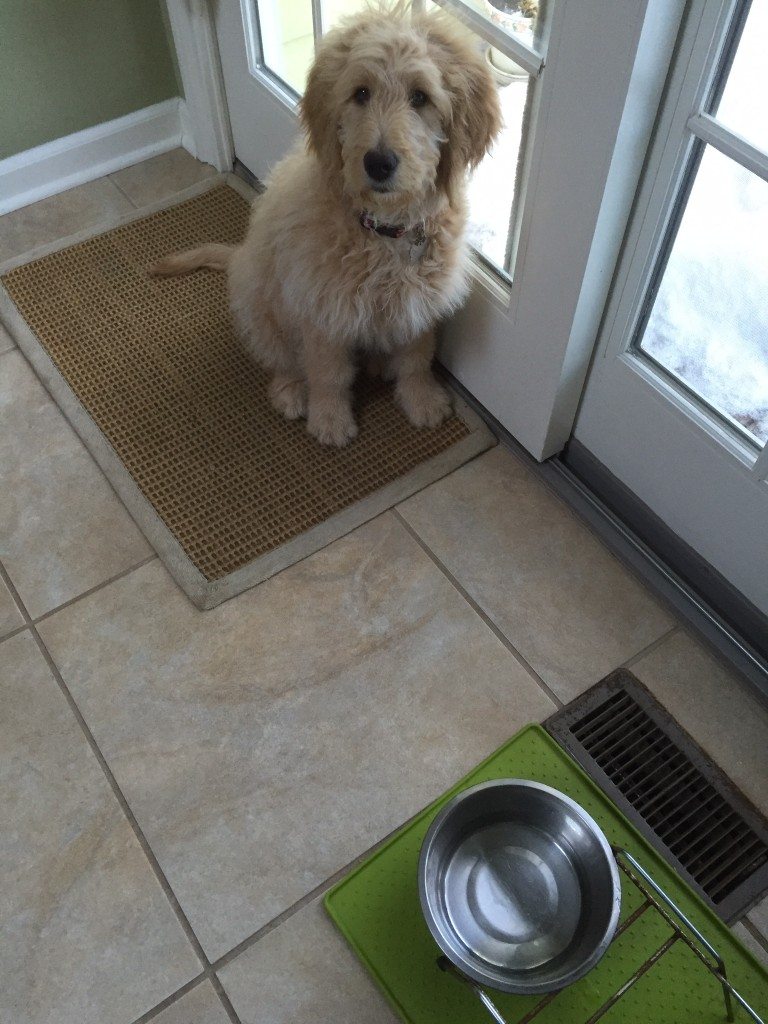 “Go to your spot”

From the get-go Barley had a couple of designated “spots” in high-traffic rooms of the house. We delineated them with some old couch cushions, but even after we ditched the cushions she remembered the location. “Go to your spot” should result in your puppy settling down in their designated area. This command is invaluable for when you’re trying to have a peaceful dinner on the couch while also watching the latest episode of Ultimate Survival Alaska, and the pup just ain’t having it. ‘Nuff said. 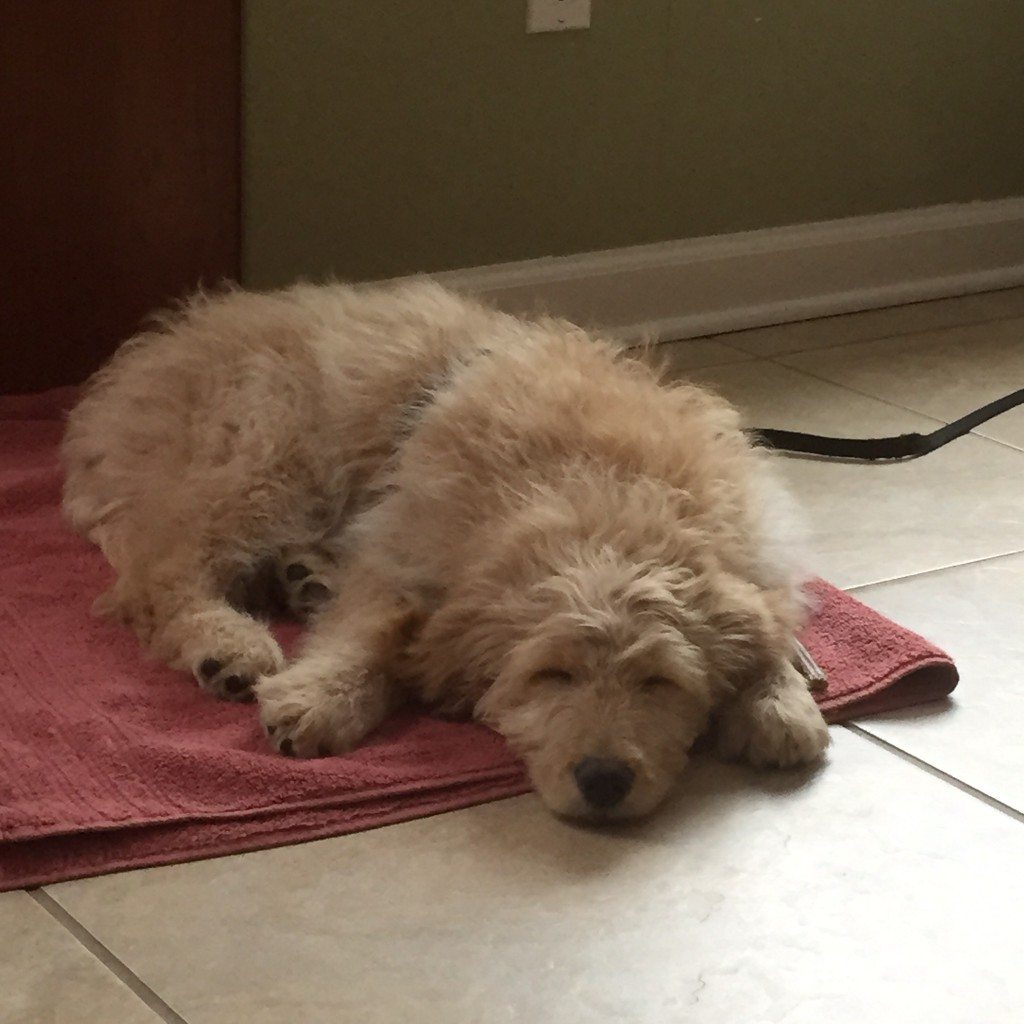 This is perhaps the MVP of this list. Barley sometimes needs to be reminded that she needs to go–what with all those distractions like chicken wing bones in the garbage, birds flying overhead, and any errant crackly leaves that cross her path. She hears it, and she squats, often with relatively little delay. Brilliant. We’re indebted to Sarah Hodgson for showing us that having a dog that will eliminate on command (more or less) is possible! Obviously there are variations to this command–really it should be whatever you’re comfortable with whispering, cooing, shouting, and, in general, repeating very often multiple times a day. And in front of strangers.

Using this when teaching Barley how to play fetch has become very handy. Puppies will inevitably lose track of a flying tennis ball or will get distracted by needing a drink of water. A slightly urgent “Go get it!” snaps them back to reality. Barley hears this and knows that we’re telling her that the ball is near her and that she has to work a little harder to find it. Before you know it her fluffy legs and floppy tongue are flying your way, ball in mouth!

We’ve used this more recently to help with house training, but Barley does have some foundations with it from her first days with us, when I used it to comfort her in the middle of the night. The beauty of housetraining your puppy is that one beautiful, glorious, blessed day, your pup will sleep through the night without endangering their tiny bladders. The downside is that they will wake you up some time around 6:30 or 7am. Every. Day. This may be great on the week days but not so much on lazy Saturdays and Sundays. What’s worse, Barley did this like clockwork and then would sometimes have a leisurely stretch and a drink of water in absolutely no rush to go outside. Traitor! This “shhhhhhh” command has been proven to buy another hour of sleep and to help settle an anxious puppy that is on the brink of having spasmodic bursts of barking, tail chasing, or general misbehavior while in the crate. To use it is to love it.