Barley, Our Goldendoodle Growing Up 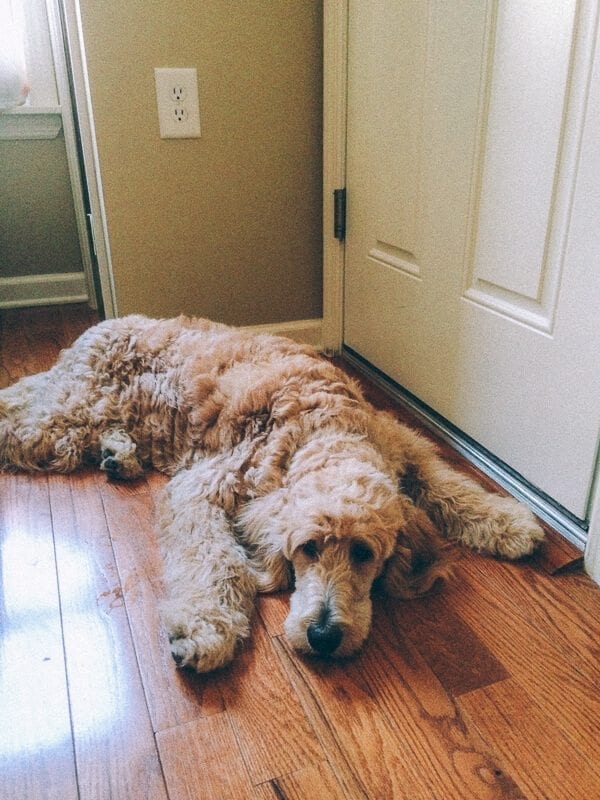 It’s been a while since we last posted a Barley the Goldendoodle update, so to make up for it, we’ve got a massive Barley post for ya’ll today. Since she insisted on practically doubling in size every week, here’s a full recap!

Day 1: A new member of the family!

When we drove out to the suburbs of Pennsylvania to pick out a little goldendoodle puppy, we weren’t sure what we were in for. Male, female? Crazed little puff ball or dignified old soul type? Here’s a list of names we drew up beforehand and meticulously debated and argued over, narrowed down from a much larger list of about 30 names:

SO. You’ve all heard the story of how Barley was picked from 3 crazy little puppies. We brought her home and immediately started trying to slap names on her. Sad to say the male names were all immediately nixed, but we still had Taro, Barley, Mooncake, Mochi, Pippin (arguably unisex sounding), and Millie/Millet to consider. The two final contenders were Barley v. Mooncake with me and Sarah in the Barley camp and my parents in the Mooncake camp. In fact, my mother ran around for a while shouting, “Mooncake, Mooncake! Here, Mooncake!” Ultimately Sarah and I didn’t like the whole “Princess” Mooncake-y-ness of it all.

So Barley it is–pretty fitting seeing as she looks like a little fuzzy Barley pearl and is already a total little brawler (see aforementioned link). Mooncake was a bit too fancy shmancy.

Names aside, she is obviously absurdly adorable.

Friends tell us she looks Chinese.

And we kinda agree.

We spend the next week completely in awe of her cuteness–look at those little rabbit feet! That tiny furry body! She fits into the house nicely and naps all the time. Life is good.

(Dragging the leash around all day helps her get used to the feeling of having it on.)

Day 29: Check out those teeth!

Barley earns herself a rather unfortunate nickname: Bratty Barley! She chews, nips, and in general agitates with those little needle-like puppy teeth. Rope toys, tennis balls, and puppy nylabones are our lifelines.

Day 32: Being a well-mannered pup is a full-time job

This pretty much sums up Barley’s “why should I?!!” face. One of the coldest snowiest, most annoying winters in recent memory doesn’t help matters either, making for a hyper Barley who would rather run around outside.

We think she resembles the chubby puppy from 101 Dalmatians or a Barley-colored meatball, yet the vet actually tells us she is “rangy looking” and to up her food intake!

Barley settles into regular home life, which means sitting by my dad’s desk most days. These are her very best “play with me or I’ll die!” puppy dog eyes.

We seem to read all these doomsday articles about what will happen if Barley isn’t properly socialized on a daily basis–basically your dog will become an intolerable psychopath…or at least, that was our general gist of the situation. We set about organizing a little play time with a well-mannered older dog across the street.

It is at this point that Barley’s feet begin to resemble Simba paws. In a word–LARGE. We have no idea what we’re in for–based on foot size alone, at this point we are anticipating a dog size slightly shy of yeti.

Day 52: Will smile for treats!

This is from one of Barley’s illustrious blog photo shoots. As you can see, she’s an absolute natural in front of the camera. And check out that perfect Asian eye smile! Heheh…

We’re not religious, but that doesn’t mean we can’t enjoy a good pair of bunny ears lying around. What you can’t see is the bone I’m dangling out of frame so she’ll sit still.

Barley spends some time with me in Philadelphia learning the ins and outs of being a cool city dog–i.e. you get chicken wing bones as often as you can sniff them out and steal them; morning run-ins with the neighboring pit bull puppy in the communal backyard; and walks with lots of oohs, aahs, and sympathetic stares for me as I alternately wrangle/jog to tire out this insane puppy.

My parents try to convince me to let them pick up Barley early as they’re coming back from their vacation, in spite of a scheduled grooming appointment. I send this picture as proof that the kid needs a spa day.

(Check out those little bear paws.)

THOSE WERE MY INSTRUCTIONS. Clear a few wispy, wayward hairs away from her eyes, that’s all!

To our horror, Barley returns from her grooming appointment looking like a confused 80s Valley Girl that just suffered the most cringeworthy perm of all time.

If she were an adolescent girl, her adult self will look back on this photo with mild regret.

Barley’s new ‘do takes some getting used to; she paws her face for a few days after her haircut, looking for phantom fur and whiskers.

Notice the horrible mismatch between the length of the fur on her head and the rest of her body. She looks like an odd tiny-headed dog for some time. Though slowly but surely the scruff we all know and love begins to return.

Barley loves playing outside and becomes well-acquainted with the garden hose as a result.

We’re also starting to suspect that this may be the end game when it comes to her size as she has miraculously grown into those paws without turning into a bear.

Barley has successfully gotten over most hurdles of puppy-dom. She can wait several hours between bathroom trips and knows how to use–*not abuse*–the doggy bathroom door bell.

She gives us all blank stares until we acknowledge her need for a trip outside.

She’s not as pushy about food, but she has been known to let out some whiny barks when we put her tennis ball on a high shelf.

Which brings us to our current timeline, roughly day 180. We’ve had Barley for 6 months now, and she just turned 8 months old on July 8. Thanks for sticking around and watching her grow up! Stay tuned for more tips on puppydom and general cuteness from Barley! For a bit of nostalgia, her very first photo on the blog!