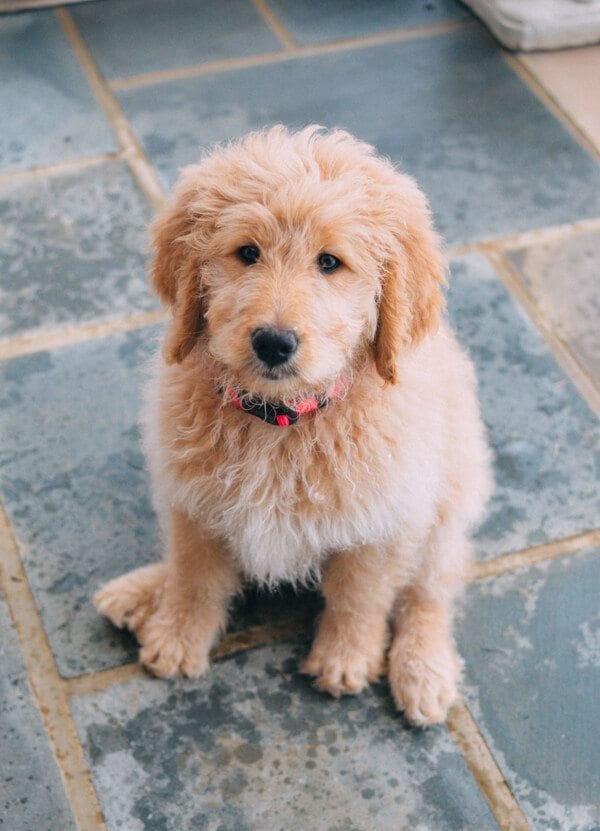 Ever since this little pup came into our lives, we’ve taken to writing about the subject on this here blog. If you need to catch up, check out our first post on the matter here. Today, we’re going to talk about how we went about the process of picking a puppy from a litter and some of the insights we learned that may help you in your search for your puppy companion (if you’re not currently in the market for a pup, this post is still amusing, so read on!).

Picking a puppy is an experience that can often (mistakenly) occur with very little fanfare. The familiar refrain of “Ooooh, what about that one!?”, followed by, “I want the black one!”, “No, I want the yellow one!” is a simplified, but basically true story of how we ended up bringing Jake home 15 years ago.

Of course, we got unbelievably lucky with Jake. But his mellow senior years (the second half of his life) weren’t quite enough to erase all memory of his insane puppy years, i.e. when he was a constant jumping bean, a chewing machine, and a seemingly resistant-to-any-form-of-training nightmare (if you look in the manila folder with all of Jake’s medical history and papers, his doggy obedience school graduation certificate is nearly torn in half from him getting to it. Irony doesn’t even begin to do that justice.)

When we decided that it was time for a second little foot-warmer to join our family, quite a bit of time and energy went into first scouring local shelters. When none of those fluffy friends panned out, we transitioned to scouring online for a good non-shedding breed, before finally setting about looking for reputable breeders of Goldendoodles–the yuppy man’s best friend.

We found a breeder who had three little bundles of joy left, waiting to go. Their little puppy eyes and fluffy big heads peered at us from the snapshots on the breeder website. After some purposeful email back-and-forths and lots of questions and clarifications, it was a wintry evening on which we found ourselves driving out to rural Pennsylvania.

But this time would be different–we had read up on the many tips and tricks for choosing a well-rounded, calm puppy that would blend into our family. There are a lot of funny tricks out there, ranging from simple to elaborate, to downright embarrassing. I mean, dog-training expert Sarah Hodgson outlined methods that involved crouching on all fours, shouting, and making loud noises.

Somehow, this didn’t seem like an ideal thing to do in a stranger’s home when you’re supposed to look responsible and caring. There are a lot of reliable tests and great systems for assigning points based on reactions to various stimuli, but we narrowed it down to 3 reliable tests, selected from Sarah Hodgson’s Puppies for Dummies (we recommend it! Lots of actionable advice for new puppy owners) and various online articles. (This link has great information if you’ve got a wider pool to choose from, at various shelters, for example, and may have a harder time with pups that aren’t as well-socialized.)

First and most important was simply 1. Observing the Puppies. How do they behave around their peers? How do they react to you when they first see/come into contact with you? Do they enjoy play fighting or bullying? Are they the first to create conflict, the victim, the mediator, or the quiet observer?

Puppies should play nicely without getting hung up on bullying the others, know when to back off if nipping other pups too hard, and also like being sociable in the first place–with you and their peers. We were looking for an even-tempered pup that was energetic, but respectful and quiet for the most part. This usually allows you to immediately rule out the craziest of the bunch.

Our second method was to 2. Cradle the Puppy. Take each prospective puppy into your lap, turning him/her onto their back. Do they squirm and kick to get away, move around to get comfy and then settle down, or relax immediately? This can get into some of the nuances of each puppy’s personality. Most breeders will work hard to socialize the pups to handling, but this will still be quite telling. The more they struggle, the harder it will be to control this feisty pup; the more mellow and submissive they are to handling, the better.

The third method we had was 3. Uplifting the Puppy. A variation of the second method, you take the pup and hold it by it’s midsection (so that it’s parallel to the ground) about a half a foot in the air. Hold him for 5-15 seconds. How does it react? Wriggly and annoyed? Relaxed and observant? Terrified and stiff? Most pups don’t appreciate this “dominance from above” kind of handling. It robs them of control, and during puppy training is an effective way to remind an unruly pup that you’re the one in control. When selecting a puppy, it gives a rough idea of how relaxed the puppy is. 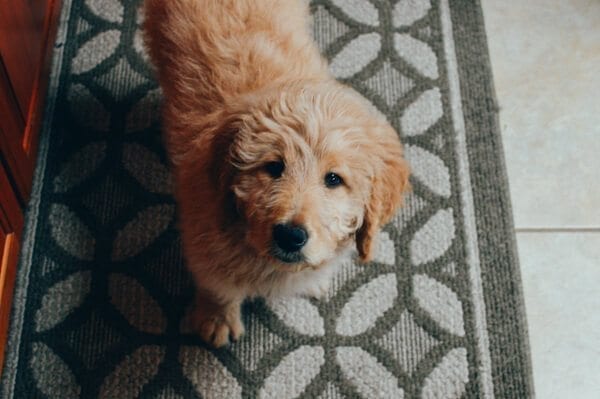 Based on these tests, we could have a reasonable idea of the puppy’s identity: top dog, middle man, or fearful little guy at the bottom of the totem pole.

Okay, back to the story:

The breeder led us to a small mudroom that served as the puppy play room. We opened the door to see 3 golden, fluffy little puppy sausages, squirming and wriggling to greet us. Here’s a rough profile of the three, to paint a picture:

Puppy #1: This guy was all spunk and brawn. I stepped into the room ahead of my parents, and he dive-bombed my snow boot, going straight for that sweet-smelling black leather as I took a seat on the floor. His attack was punctuated by an assault on my coat, followed by a couple of smack-down sessions with his little broski. When he chewed on my boot, half his body was on my leg–very possessive and protective of his new toy, totally disinterested in us. He was jumpy and energetic, preferring to roll around with his siblings than to greet us. I couldn’t even get a hold of him for tests 2 and 3. This pup was definitely Big Brother.

Puppy #2: The little brother of the three was sweet, but distracted by Puppy #1. Puppy #2 would invariably get pinned by his big brother but put up a fight. I grabbed him for test #2 and he made a halfhearted kick before settling nicely into my lap with a quizzical sort of, “what am I doing here?” look on his face. In another fight with Big Brother, Puppy #2 decided that enough was enough and took his chance to *ahem* “mount” his brother to assert dominance. Seeing a tiny little 8-week-old puppy make a power play via humping isn’t necessarily the best first impression. But he had responded reasonably well to handling. And he still looked like a tiny live little teddy bear, so there’s always that.

Puppy #3: The only female left of the bunch, my dad tells me that she made a beeline straight for me when I sat down in the room as I observed Pups 1 and 2. She yielded quite willingly to handling, settling into my lap and even trying to climb back on for more cuddles when I set her aside. A lift in the air with test 3 confirmed that she was a reasonably submissive pup that was alright with being poked and prodded. A bit more observation revealed a very interesting incident: the two brothers were play fighting pretty vigorously. Little lady puppy #3 marched over and broke it up with a few well-timed puppy barks and some warning nips to the lads. This move immediately endeared me to her–I mean, this was my kinda dog–get in there like a true boss and break up the brawl between two dopes, amiright? But, some key insight here born of hard-won experience with who we now know is truly a little ball-buster…To me, this was simply an adorable and pacifying move beyond the abilities of any average dog. In reality, breaking up fights among littermates is a very “alpha female” job…We’ll discuss this further in an upcoming post re: dominance/aggression in puppies.

The handling tests, our observations, and reassurances that female goldendoodles are quite predictable in size when compared to their male counterparts (who can reach up to 100 pounds!), made #3 a no-brainer for us. And if you’ve been reading these posts, of course this little pup is Barley.

Also, tellingly, when she was brought out of the puppy room and into the kitchen and living room area, she trotted around nicely, respectfully and calmly minding the breeder’s older dogs and small children. And of course, she took an opportunistic swipe at some kibble in the older dog’s bowl.

Food-motivated? That was perfectly fine with us.