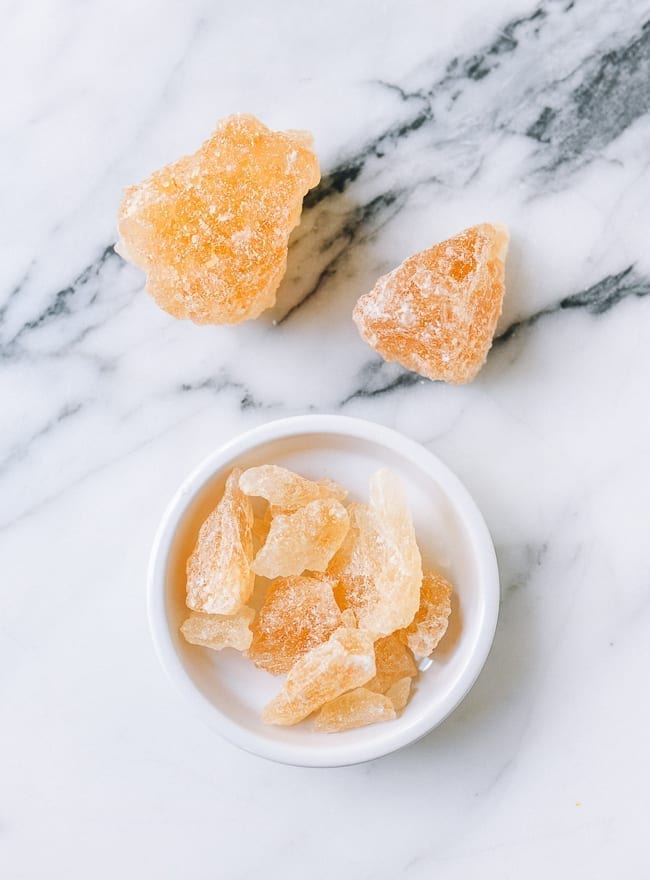 Though you may not always notice it, sugar plays just as important a role in savory cooking as it does in sweets. From braised meat dishes to stir-fries, you’ll find sugar in many of the recipes on our blog. Rock sugar in particular is often used in Chinese cooking.

In this article, we’ll explore two different types of Chinese rock sugar and their uses.

What Is Rock Sugar?

The process of making rock sugar (bīngtáng, 冰糖) likely originated during the Tang Dynasty of China in the seventh century A.D.

A monk in Sichuan Province discovered that boiling the juice extracted from sugarcane would result in a thick liquid, which could then be poured through a bamboo pipe and into a pot. The liquid would crystallize over a period of several days, resulting in hard, translucent formations that looked like chunks of ice.

Indeed, it was referred to as “sugar frost” or “sugar ice” for hundreds of years until the Ming Dynasty, when granulated sugar rose to popularity.

Today, rock sugar is produced in the form of irregular lumps and in smoother, more uniform chunks, and it ranges in color from pale gold to white.

It doesn’t have a particularly distinct flavor apart from its sweetness, and it tends to be slightly less sweet than standard white granulated sugar.

It also creates a lovely sheen in sauces and braises (note the shine of our Shanghai Braised Pork Belly, below!)

Also made from concentrated sugarcane extract, it still contains the molasses that is usually removed from sugar during the refining process.

Golden brown to dark brown in color, it is sometimes also referred to as “brown sugar,” “slab sugar,” or “brown sugar candy.”

This is the rock sugar we use most often in our kitchen. It is sweet, but has a more caramel-like flavor.

How To Use Rock Sugar

In all types of savory cuisine, sugar can be used to balance out salty and sour flavors. We add a few lumps to balance the saltiness of the dark soy sauce in our Hainanese Chicken Rice.

In addition to creating harmonious flavors in savory dishes, it can add an attractive shine to braised dishes. Some examples include our Chinese Braised Oxtails, Roasted Braised Duck, and Shanghai-Style Braised Pork Belly. We’re getting hungry just thinking about it!

Of course, this ingredient also has plenty of sweet uses. If you’re feeling adventurous, you might try Snow Fungus Soup with Pears.

We also use it for our Sweet Red Bean Paste, which makes a great filling for Su-Style Mooncakes.

It also adds sweetness to our Sour Plum Tea, a fruity beverage that’s always extraordinarily refreshing on a summer day.

When cooking with either type of rock sugar, measurements must be done by weight. (This is why we try to always include weight measurements in our recipes.)

When using regular rock sugar, which comes in many irregular sized lumps, find the size that works best for that particular dish. Brown rock sugar slabs can be snapped or cut down to the size you need.

Brown rock sugar in particular lends a nice glazed appearance and a hint of sweetness to Shanghai Smoked Fish, and we love the caramel-like taste it gives to Nian Gao, the sweet rice cakes popular during Chinese New Year.

You can purchase rock sugar at Asian supermarkets and grocery stores. Specialized spice and tea shops may also carry it. It may have a different name on the label, like “rock candy,” “sugar crystal,” or “lump sugar.”

If you’re unable to source it locally, it’s also available online from Asian grocery merchants like yamibuy.com, justasianfood.com, and mimodian.com.

Store in a sealed container in a cool, dry place. Like normal granulated sugar, it technically has no expiration date. However, it’s recommended to use it within two years of opening.

If you don’t have this ingredient on hand or can’t find it, granulated white or brown sugar will work just fine as a substitute.

To replicate the taste of Chinese brown sugar, you can heat white sugar in a pan until it caramelizes slightly.

For brown rock sugar, check out these recipes: