Harbin Ice Festival and Freezing our Butts Off! 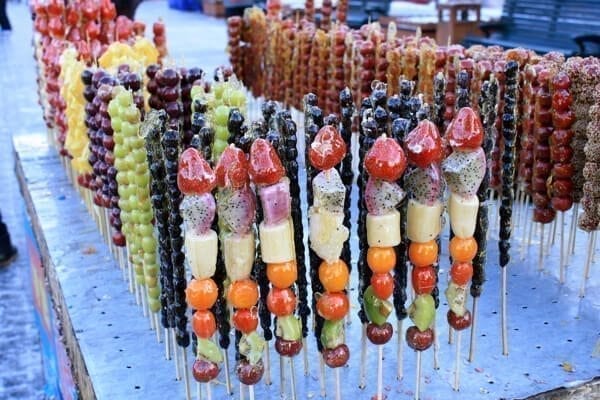 If you’re looking to stack on more layers than you’ve ever worn at one time and STILL be cold and maybe watch a very large, well-fed Siberian tiger tear into a chicken at close range, then Harbin is for you. Well, at least the Harbin ice festival and Siberian tiger preserve are great places to visit!

This freezing city is in the far north of China, near the border with Russia, and we had the pleasure of packing multiple pairs of pants and heading up there in February, when temperatures were dropping down to about -20 degrees Fahrenheit. It’s a perfect place for the Harbin Ice festival. Lucky us! 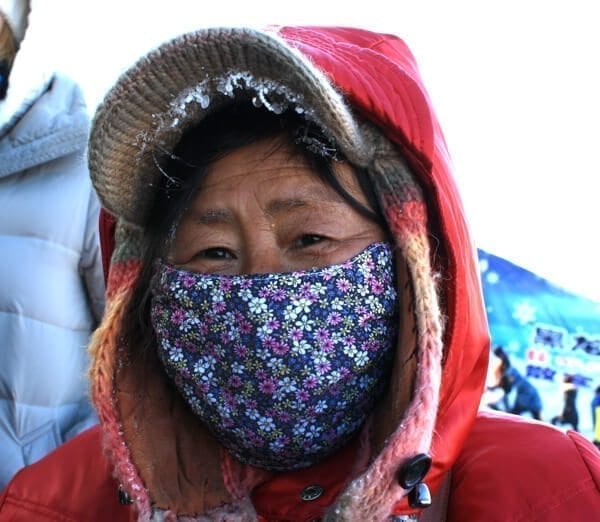 Harbin is the provincial capital of Heilongjiang (which translates to: “Black Dragon River.” Pretty intense, right?), the northernmost province in China. Because of its proximity to Russia and its former life as a city under Russian rule, Harbin features some Eastern European architectural and cultural influence, as well as these giant loaves of brown, supposedly “Russian” bread sold everywhere as a local favorite (best to steer clear there. A lot of it has been sitting around for a while and is stale as heck). We also tried “bread soda,” which…legitimately…tasted just like you’d expect bread soda to taste. It was weird. 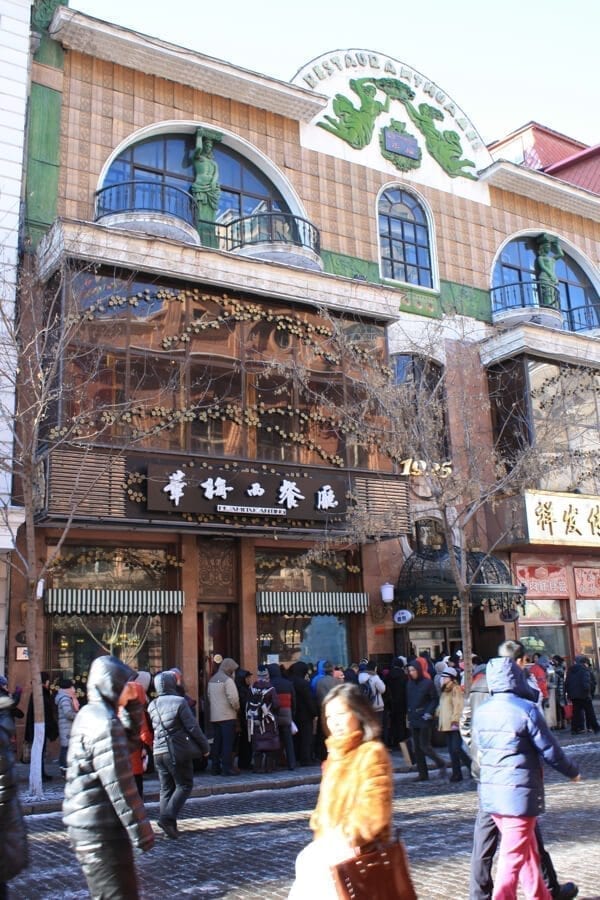 When we first arrived at the airport, we were already prepared for the Harbin ice festival and for walking around the city, wearing multiple pairs of socks, hats, gloves, scarves, multiple pairs of pants, the works. It actually wasn’t so bad when we stepped out into the windy night air to catch a taxi. The cold kind of creeps up on you slowly.

Your toes will get it first. (It penetrates your fleece-lined snow boots, your thick wool socks, then the cotton ones, and finally the thin ankle socks under all that. Then the numbing, burning sensation settles in. The only remedy? Keep moving. Never. Stop. Moving.) 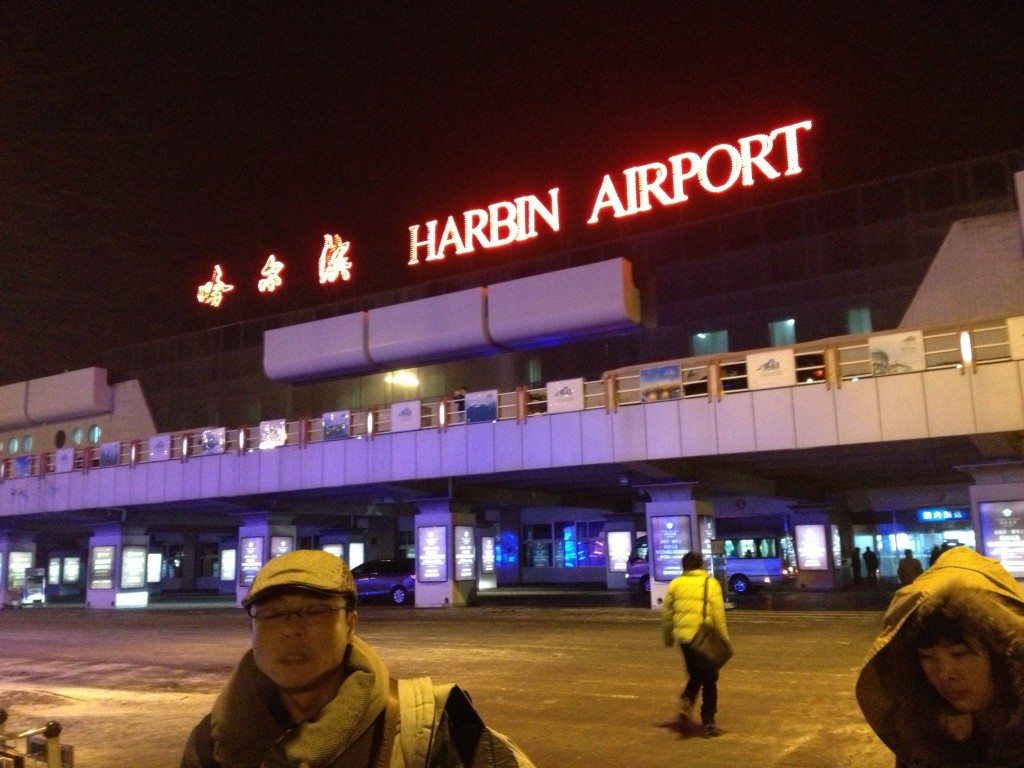 This was a kind of cold that we folks from the comparatively tame tri-state area had never experienced. Even those of us who grew up with frigid winters in the Catskills (Dad) felt it. After getting into the taxi, we realized that every single road was covered in a three-inch-deep layer of solid ice.

Cars were cruising along this glassy, utterly traction-less surface like they were out for a leisurely afternoon drive down the freeway. Our taxi driver was cool as a cucumber as the car swerved occasionally along the icy road. Meanwhile, we were gripping our seats for dear life. But we did notice that no one ever went above about 40 mph, and people kept a safe distance from each other on the road. So that was comforting.

Our first stop on this icy cold journey was to…………

…the hotel, which was, blissfully, heated and well-insulated.

The next day, warmed, refreshed, and layers reapplied, we headed out to visit the Saint Sophia Cathedral, an old Russian Orthodox Church. There is a lot to see in the city aside from its famous Harbin Ice Festival.

Okay, so fair warning: not only are the roads covered in a layer of ice, but the sidewalks are too. We asked a taxi driver why no one was salting the roads or the sidewalks, and apparently, they need so much salt to keep the ice at bay that it would make significant impact on the environment, so salting roads and sidewalks is prohibited in Harbin.

Which made for a dicey walk down the street. But we got there in one piece. The cathedral was quite beautiful. A piece of Europe in China. 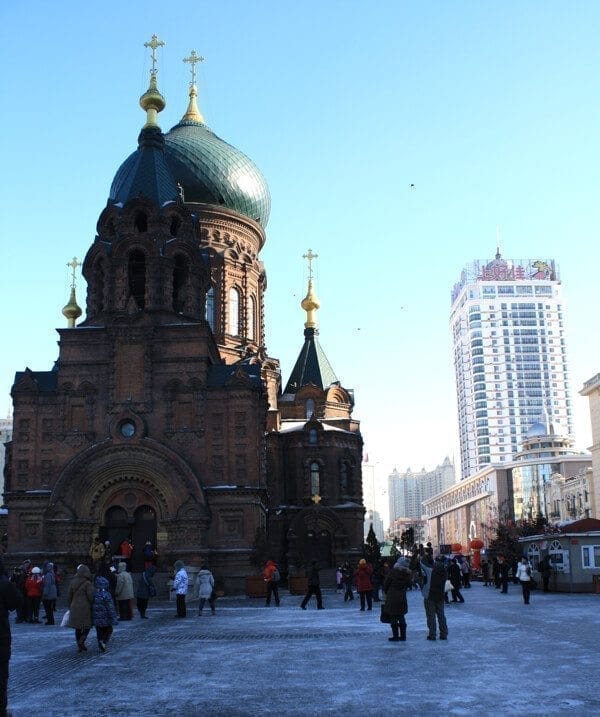 They were also selling these candied fruits outside, which we were too cold to eat. 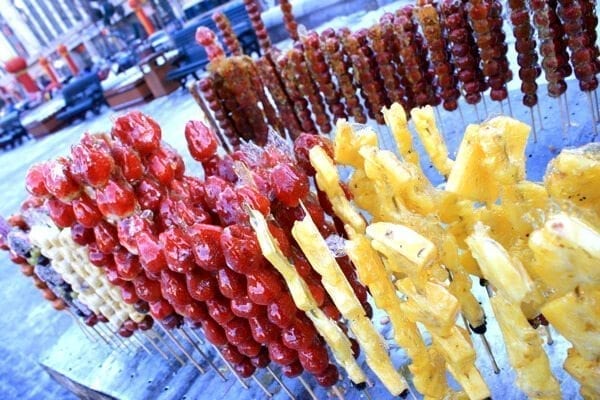 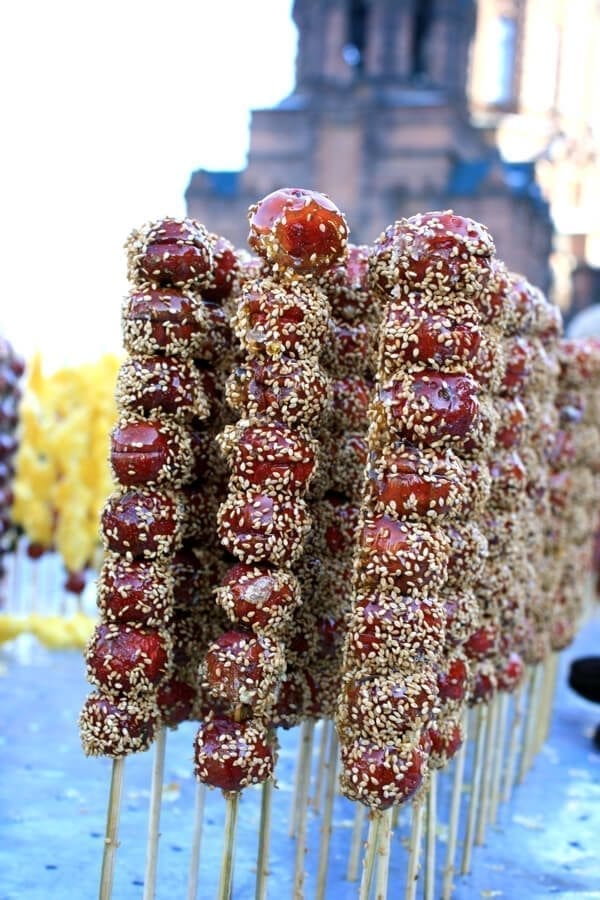 A short walk from the Cathedral was Zhongyang Street, which is sort of Harbin’s main pedestrian thoroughfare. 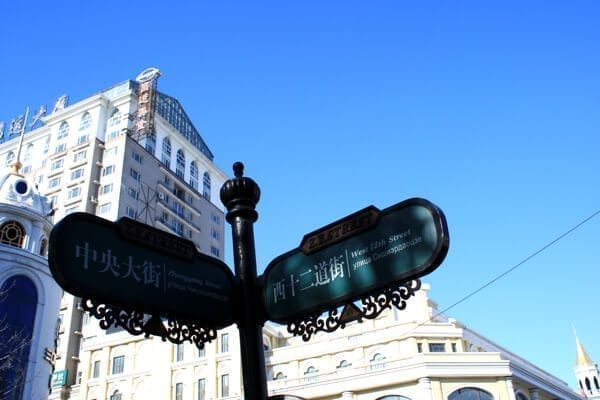 As we walked, we got more comfortable sliding our boots along the ice. Sort of like getting your sea legs, only it was your ice…legs. Ha. Ha. Ha.

Zhongyang Street is where you can really get a sense of the whole East meets West vibe of the city. 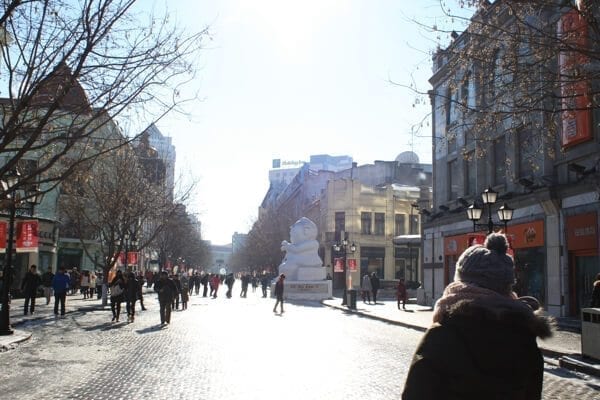 That night, we made the trek to the Snow and Ice World – the center of the Harbin ice festival, where you will probably want to spend an hour, at most, because you need to go when all the ice buildings and sculptures are lit up…i.e. when the sun is down and you’re at your coldest. 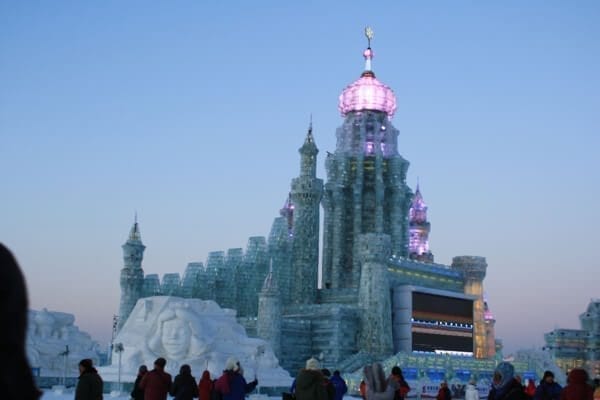 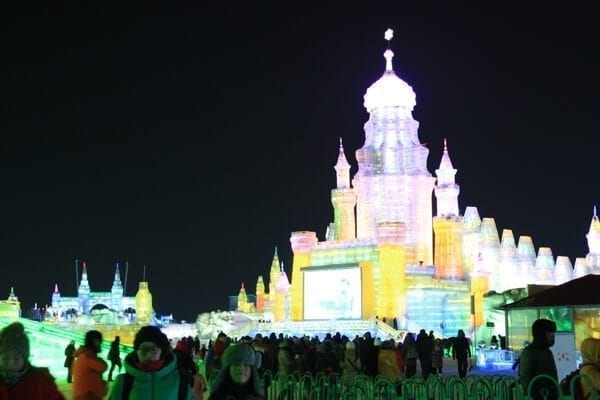 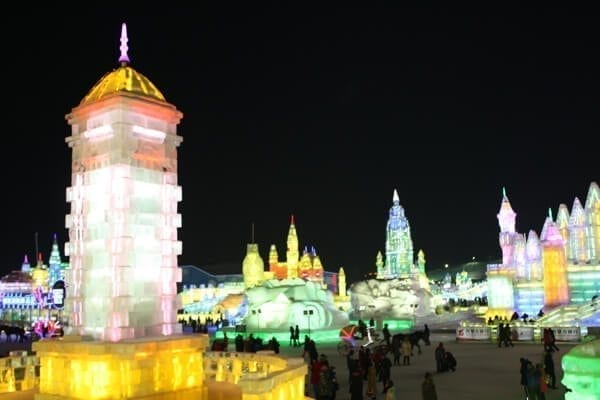 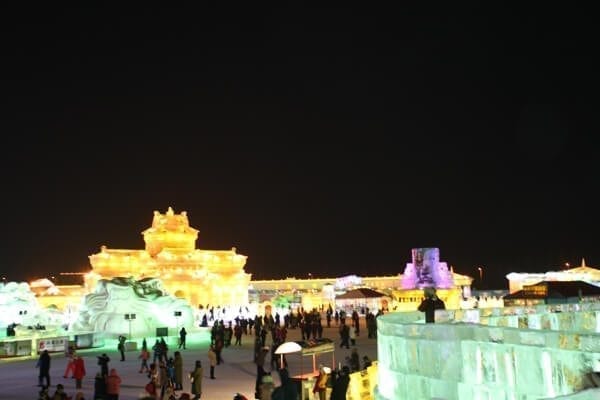 Unless you have a preternatural tolerance for shivery, benumbing cold, you will want to get yourself straight to the big, heated auditorium near the entrance of the Harbin Ice Festival entrance where they have a seemingly endless rotation of singing, dancing, and acrobatic acts.

It was sort of sad, but no one really seemed to be paying attention to the bejeweled performers on stage. After each performance, which lasted anywhere between 5-10 minutes, there was a light smattering of scattered applause. You sort of realized that everyone was in there for one thing, and one thing only: warmth.

We’re slightly ashamed to say that we all ended up sorta, kinda falling asleep–for over an hour. All that core temperature regulation and the tense, careful sliding that passes for walking up there makes you tired! So yes, that is our recommendation to any traveler. After walking around the Harbin ice city, get to the indoor auditorium, settle yourself in one of the comfy seats, absorb all the collective heat coming off your fellow audience members, and take a nap. It really hits the spot.

You can also visit the ice bar, where you can sit at ice tables and sip some icy cold beer. You know, if that’s your kind of thing.

They also had these little makeshift “Modern Café’s” dotted around the place, and our strategy of touring the rest of the park was to sprint from one to another, so we could huddle in the glory of the miracle that is the electric heater for short, ten-minute intervals.

And sure, with each sprint, we made sure to glance around at all the awesome ice and snow sculptures, walk to the top of an ice castle, or take a quick ride down the ice slides. 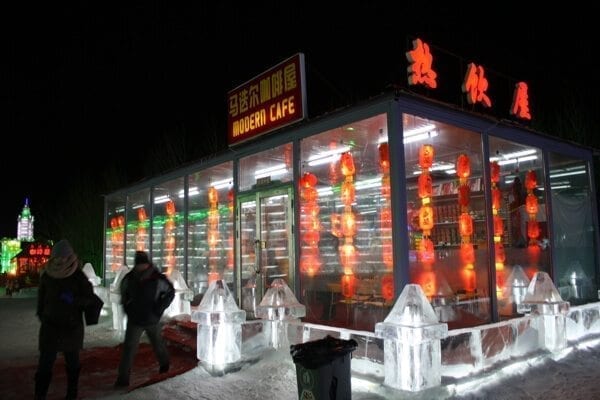 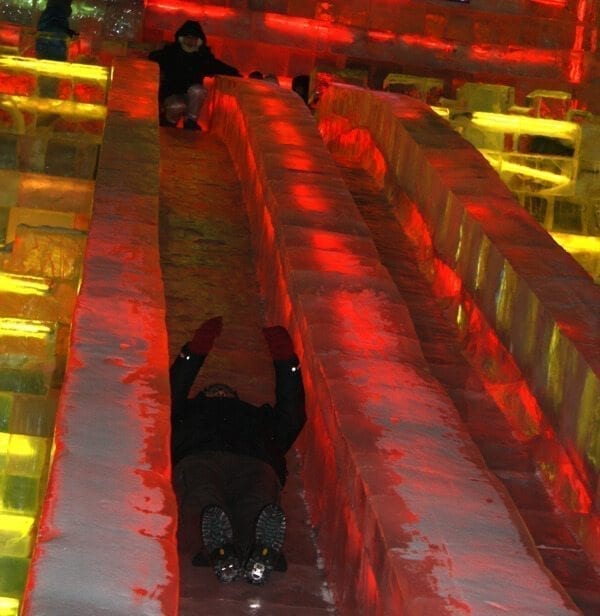 Tip: when ice sliding, make sure your butt is covered by your coat. Sliding on your winter coat = a high-speed, fun-filled ride. Sliding on your pants = a slow, shameful scooch along the cold ice with everyone watching and an eight-year-old at the top of the slide complaining that it’s his turn, and you’re taking too long. There don’t seem to be any crickets in Harbin during the wintertime, but if there were, they would be chirping in the silence of your shame! So, uh…slide on your coat.

The next day, it was time for the Siberian Tiger Reservation. They have…a lot of tigers. 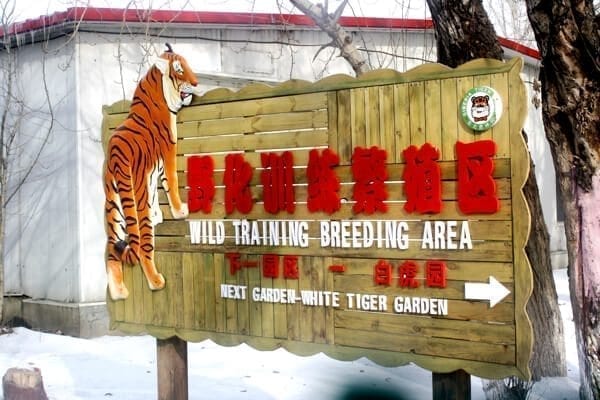 Very large tigers who don’t have to work for their food and spend the majority of their day sleeping and/or prowling amongst their strong, silent brothers and sisters. 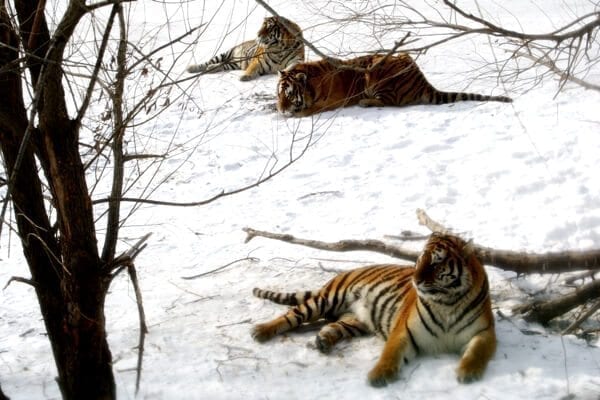 The way you tour this place is sort of Jurassic Park-style, in a large metal bus with bars on the windows (and did that help Dr. Allan Grant or the young grandchildren of that white-bearded crazy dude? Didn’t seem to.)

But it’s the closest you’ll ever come to a full-grown Siberian tiger, and that was pretty cool. 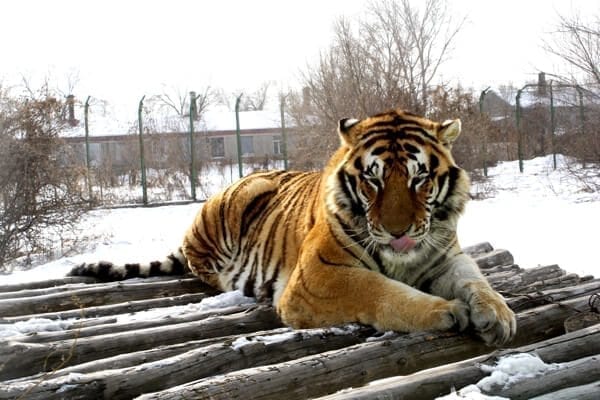 But strangely, they also had a bunch of cats that you probably wouldn’t think to find in the middle of a frozen winter-land. We’re pretty sure lions weren’t built for ice and snow, let alone regular encounters with their big cat counterparts from the other side of the world. Apparently, they all naturally grew thicker coats when they arrived in Harbin.

But it’s hard to believe that they’re enjoying it.

That’s the reality of China…amidst all that growth, change, and positive improvement, you’re also going to find negative ramifications, or some things that just seemed to fall through the cracks. Which sucks. Especially for those lions. 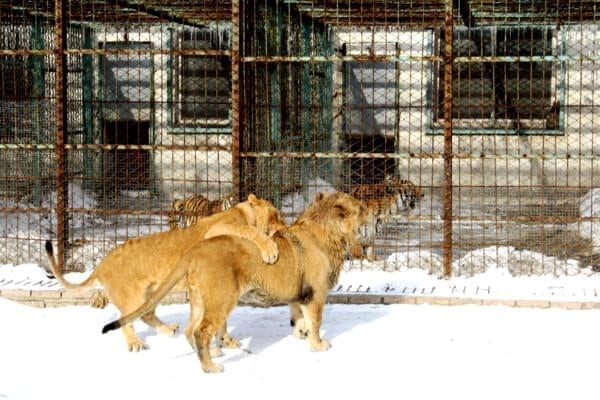 At the end of the tour, you can go up on a raised skywalk to get a more aerial view of the park. 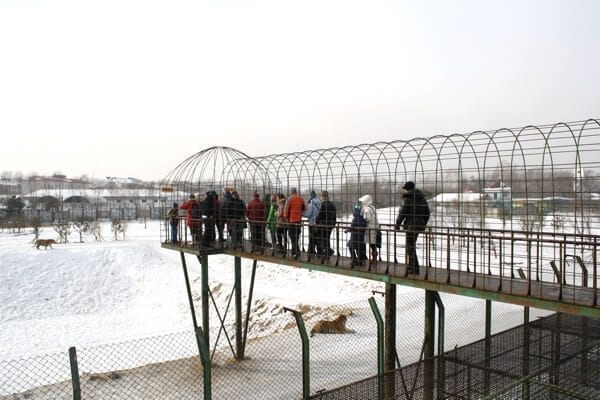 This is when it all got very real.

**********If you get squeamish about watching Animal Planet or even the whole “circle of life” talk that Mufasa gives to Simba about eating the antelope and the grass and such, it would probably be best to skip this part***********

While we were up on the walkway, taking pictures and watching the tigers roam, a large blue dump truck drove out into the main area of the park. You immediately sensed that something big was about to go down, because all of the tigers perked up and ran toward the truck, following it until it eventually came to a stop near the large, frozen watering hole. 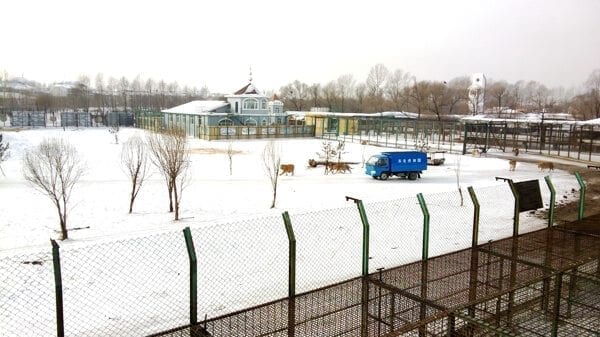 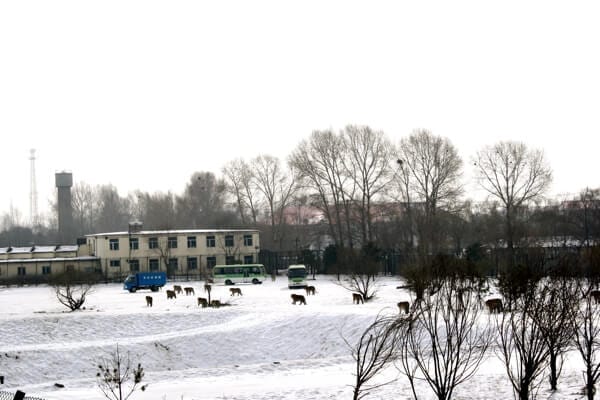 Then, very slowly, the back of the truck lifted up, and the hatch opened. You couldn’t quite make out what was happening, since it was a bit far away, and the thing that fell out of the truck was a white color, blending in with the snowy surroundings.

But then there it was. The unmistakable sound of a goat, who had found himself in a very, very unfortunate situation.

You can probably guess what happened next.

It is China, after all, so in addition to that little display, visitors could also purchase live chickens to feed the tigers. A couple of German guys went for it, throwing the chickens into the pen, at which point the tigers pounced, each of them fighting for a scrap of feathery goodness.

As you can tell, zoological standards in China are a little different than they are in the U.S.

Making entertainment out of feeding tigers isn’t something that we agree with, but hey, as with many things, they do things a little differently in China.

After the harrowing tiger experience, it was time for lunch. We tried to put thoughts of goats and chickens out of our minds.

We ended up at a place that specializes in a special fish stew dish that’s cooked in a large, wide pot built into your dining table.

It’s a favorite of the locals, as a warming winter meal. You basically go in there and choose all the raw ingredients that you want to go into the soup: vegetables, mushrooms, tofu, noodles, etc. Then your chosen ingredients and your fish are all cooked into a warm, tasty soup/stew right in front of you…sort of Harbin’s take on a hot pot.

After lunch, it was time to head to the airport (the plane ended up being delayed, not, ironically, because of anything that was happening in Harbin, but because it was snowing in Beijing).

We settled in for a long wait at the gate, and ended up getting back home in Beijing around 1 AM. But, all in all, the city and the famous Harbin Ice Festival was a really interesting, unique place to visit–extreme weather, Sino-Russian cultural mixing, a live action version of Big Cat Diaries, and bread soda? All things that count as totally new experiences. Plus, we totally got the whole walking on ice thing down. 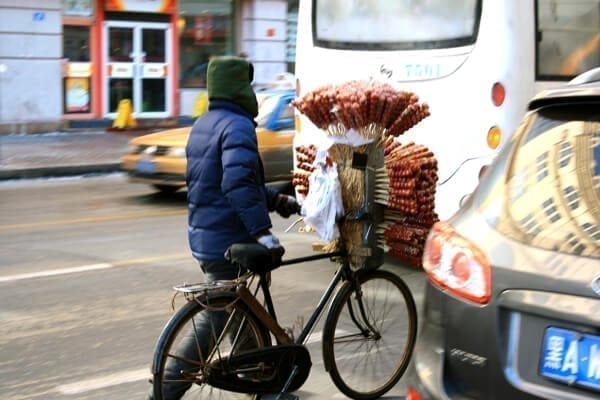