Subscribe
Tap here to receive our FREE top 25 recipe book!
Home Travel THE CHINESE TOUR BUS: TO BE AVOIDED AT ALL COSTS

THE CHINESE TOUR BUS: TO BE AVOIDED AT ALL COSTS 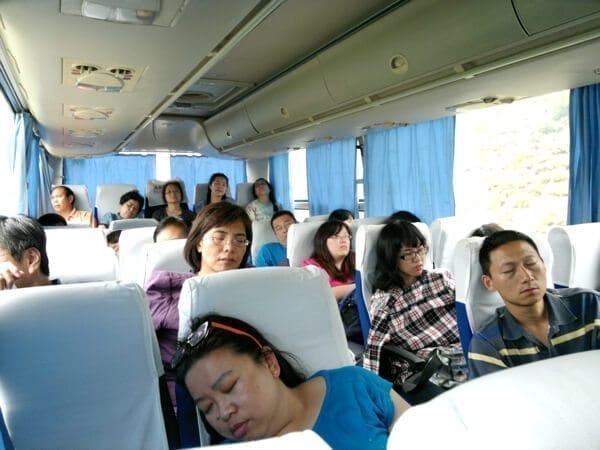 When planning a trip to China, you may very well be tempted to sign up for a local bus tour.

We understand. It’s convenient. Everything is paid for and taken care of: meals, “five-star hotels,” transportation, and tickets to all the attractions.

It’s safe and painless to plan, because you’ll have a guide to do everything for you. Because this is really unfamiliar territory we’re talking about, and you probably don’t know the language!

Sure, in France you can get by with a few bon soir’s, merci’s, and some swift gesturing around for la toilette or une baguette. But China is different. You may not have sat through it in high school, and you would have no idea how to order food off a menu, let alone try to get around on public transportation.

No, you want to see China, but it just seems too complicated to do on your own. So you get online and book your family on an all-inclusive bus tour. Everything’s going to be easy, relaxing, and enjoyable.

And that’s where you’d be wrong, friends. Very, very wrong. For whatever reason (*cough* —my mom— *cough*), we have had quite a bit of experience with Chinese bus tours, and I have to say, definitively, that we’ve never been on a good one.

The Chinese guided bus tour is so common these days that they all pretty much follow the same format. If you live in Beijing, for instance, you can book a weekend bus tour to the northern grasslands or the Great Wall, and they’re often so reasonably priced that it seems like a no-brainer (especially the ones that you can book from within China).

We’re telling you from experience why that logic is skewed. Horribly, horribly skewed. Here’s why:

1. Crowded buses are generally unpleasant and can get smelly:

If you’ve ever been shuffled on and off a bus for long periods of time, you know it’s not the most pleasant experience. Especially in the summer, when things get humid and sticky, and you feel like you’re riding along in a heated aluminum can. Plus, the humidity doesn’t do much to help the odorous smells of you and your fellow sweaty tourists.

For whatever reason, you just had to suck it up and get on in there to do your business, and you’re glad the traumatic experience is over. Well, go back to that bad, scary place for a moment and picture it in your head.

Now imagine it about ten times WORSE. That doesn’t even scratch the surface. Seriously, guys. You’d be happier peeing in the bushes.

You’ll stop early. You’ll stop often. You may see on some tour packages that the itinerary boasts something like “worry-free prearranged shopping experiences.” If you see that, run. Run fast.

These are basically enormous time sinks spent in dingy, poorly lit warehouses and markets, where you may sit down to a sales pitch for marked up jade, pearl jewelry, “healthy” packages of very expensive dried seafood, tea, or herbal foot massages.

The tour companies get a fee or a cut of the profits for bringing tourists to these money traps. You may find yourself meandering among tables and tables of dried oysters and shrimp for two hours, wondering when you’re actually going to get to see the cool old village that was promised in the brochure.

4. Just know that “5-star” in China isn’t exactly the Plaza:

Sometimes it’s not even Best Western. The standards for rating hotels in China is pretty off. Just know that when you see “five star hotels” in that brochure…it’s probably too good to be true. It will be reasonably clean, but it might make that stay at the Econo Lodge look pretty good.

We’ve heard hotels described as “6-Star” or “7-Star,” in order to offset the rather off perception of what constitutes five stars.

If you want to be herded like cattle from stop to stop, never having the time to linger in a place or change your plans for the day, with your food, hotels, and activities pre-chosen, then maybe this is for you.

But travel is all about experiencing something out of your comfort zone, exploring how other people live. We keep trying and trying to tell *cough* —my mom— *cough* this, but as the designated travel planner of our family, she sometimes likes how simple and no-fuss the tours are, which is why we’ve had so much experience with them.

But having done both the tour route, and the self-guided route, it’s pretty easy to see which one comes out on top.

7. You want the local experience:

Last summer, we visited Hongcun, a small, ancient village where scenes from Crouching Tiger, Hidden Dragon were filmed. You know when the cool bald guy jumps over that half moon pond? That was Hongcun.

It’s the town’s most recent claim to fame, which is why more and more people are flocking there to take a look. But Jade Foxes and Green Destinies aside, this was a really cool place. The buildings date back to the Ming and Qing dynasties, and people still live in them. It’s really like time has kind of stopped there, with people growing vegetables in small patches of land dotted around the village, getting their water from the centuries old canal system running through the buildings, and selling antiques.

We ended up wandering further into the village, away from the half-moon pond and all the tourists. There, we came across a woman who was picking vegetables in her garden.

“Have you had lunch?” she asked.

We’d had a big breakfast and some crackers or something earlier, so we’d already decided to skip lunch and go for an early dinner. But my mom told her anyway that we hadn’t eaten.

“Come! I’ll make you lunch. This is fresh from our own garden!” she shouted.

She rushed us to her house, which she’d converted into a small hotel. Her courtyard was so pretty and quaint. She took us into the family kitchen and showed us the vegetables, meat, and tofu that she had to cook our lunch with, in addition to the fresh squash that she’d just picked.

The HUGE meal ended up costing something like $25, and we ate it ALL. All the while, she told us about her garden, her hotel customers, life in the country, and all that good stuff. And you just don’t get that experience when you’re following the yellow flag and wearing the tour company visor.

You’ll find a surprising amount of English around China, especially in big cities like Beijing, Shanghai, or Guangzhou. Don’t worry about transportation. Beijing and Shanghai’s subway systems are pretty easy to navigate, and taxis are cheap. To communicate with your taxi driver, try to have the address printed out somewhere in Chinese.

You can always hire a local private tour guide to show you around, if it will make you more comfortable. It’s a lot more flexible that way, with you running the show. And it’s usually pretty reasonably priced.

All in all, if you ever see an advertisement for a bus tour, turn the other way, and RUN.