by: Kaitlin
218 Comments
Jump to Recipe 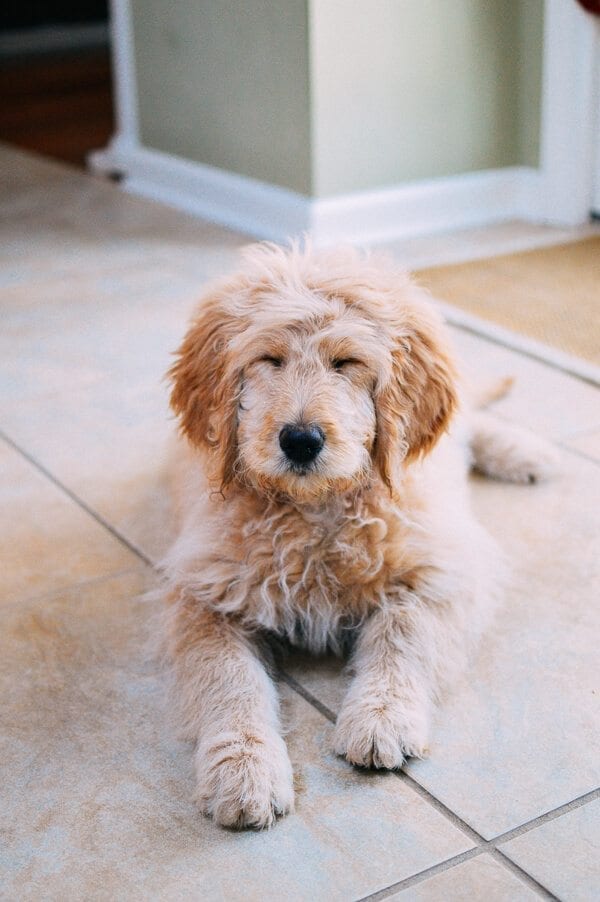 It’s hard to believe, but it’s been nearly three months since we brought Barley home. She’s made a lot of progress since then, the most obvious example of which is the fact that she is now completely house trained. (Cue music, confetti, fireworks, and exploding bottles of bubbly.)

It took about 5 weeks for her to learn to only go to the bathroom outside, and we’ve gotten to the point where when she needs to go to the bathroom, she’ll go up to the front door, ring a bell that hangs on the doorknob, and sit down to wait for one of us to take her out.

Those first few weeks, however, were a bit difficult. She’d whine in the crate at night, have to go outside every hour and a half, and had more than her fair share of accidents indoors. But with a regular schedule and a fair amount of homemade treats (scroll down for the recipe), she’s doin’ pretty well so far (this is not at all to say that she’s the perfect pup. We’ll get into behavioral problems later!). 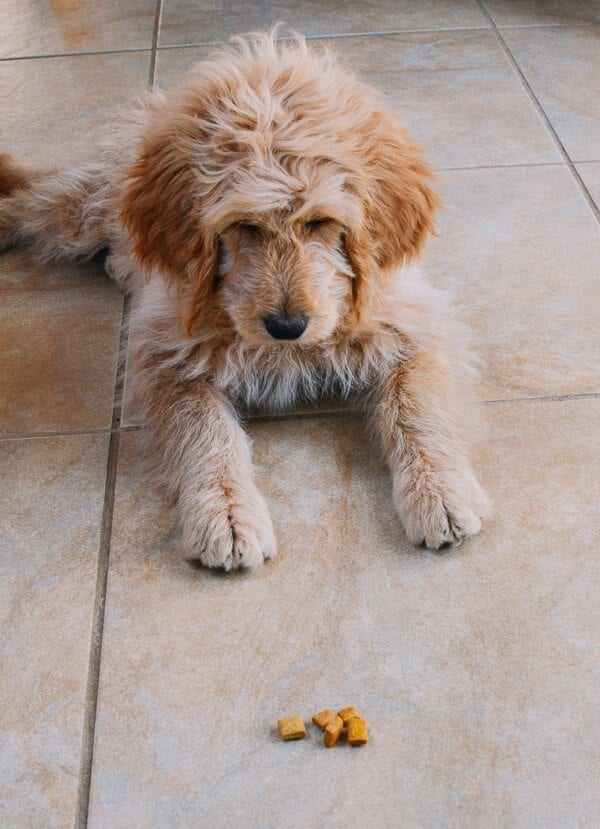 Here are some of the things we did to get her to this point. We know that there’s a lot of debate among trainers, dog owners, etc. about training techniques. As a bit of a disclaimer for this post, it’s important to remember that every dog is different and that these are just the experiences of one harried family! A dog’s individual personality, age, and temperament all play a big part in figuring out effective training methods, but hopefully you can get some insight or at least some much needed empathy from this post!

The first night, Barley whined in the crate like crazy. We quickly realized that she was yelping and crying because she had always been around her litter mates. Being left alone as we all retreated upstairs for bed felt like the pack was leaving her behind.

When someone was in sight, she would stop whining. So we needed to let her know we were still around. Eventually, I (Kaitlin) decided to sleep on a mattress on the floor next to her crate for the first week. (This resulted in the unfortunate reversal of ALL my hard work over winter break sleeping to rid myself of finals-induced eye bags.)

We then kept her within earshot for the next week since we had to let her out in the middle of the night to do her business. A couple of reassurances after midnight outings when she would go back into the crate and even the sound of breathing went a long way in comforting her enough to go back to sleep.

Puppies can only hold their bowels for 2 hours or so at a time when they are less than 10 weeks old. But on the 3rd week, she graduated to sleeping a full 6 hours, which, as you can imagine, was epically amazing. 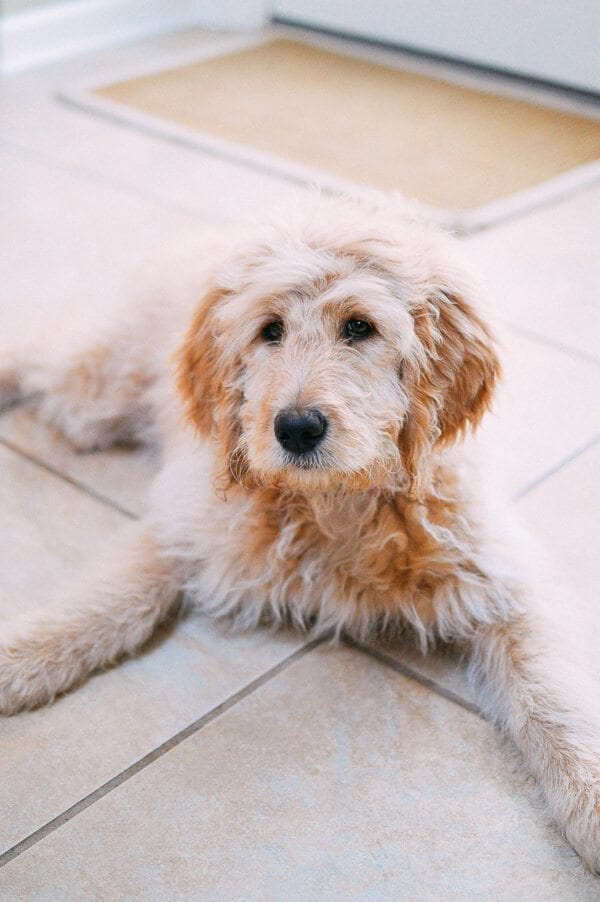 The most crucial part of house training is your dog’s crate. The crate becomes their den, and they will never willingly soil it…in theory. Before Barley came home, we prepared Jake’s old crate by reducing it down to puppy size. With a few well-placed boxes, there was only room enough for her to turn around and lie down. Any bigger than this and you risk your puppy partitioning the crate into a “sleep” side and an “emergency poo” side.

One thing we’ve learned from our excessive book reading and checking of internet resources is that puppies should have a solid schedule and rules in order to develop good habits from the start.  Weeks 8 to 16 are really important to establish boundaries and foundations for obedience and discipline.

From the books we read (of which there were many), we chose the Monks of New Skete’s The Art of Raising a Puppy (Revised Edition) and How to Be Your Dog’s Best Friend as our go-to references. All jokes about these soft-spoken, doggie whispering men aside, the Monks of New Skete know. Their. Stuff. Barley seems to cycle through every puppy problem conceivably known to man, and these books have been indispensable.

After the first few days, we quickly realized that a regimented schedule was needed for house training. Based on the monks’ recommendations, Sarah created a crate training schedule that looked something like this:

Obviously, you have to be mildly insane to get a puppy.

They’re a lot of work, man.

So there are a few more things that we learned about house training with Barley: 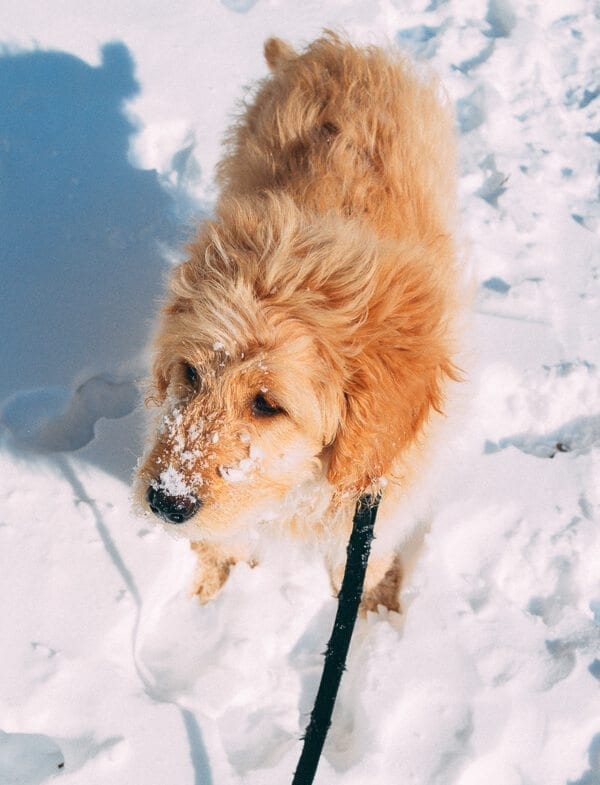 When choosing a puppy chow, we went for something that had a protein as the first ingredient (“chicken,” “lamb,” “beef”). Ingredients like chicken and bone meal are not as good. These “protein-first” foods are also lower on grains (grain-packed foods require more volume to satisfy a growing pup). We feed Barley Nutro’s large breed puppy formula, which is also what Jake grew up on!

As for food bowls, Barley started right off with Jake’s adult-size, very indestructible stainless steel water and food bowls. At first, her head was so small that her floppy ears would mop up the food, but she’s grown into them in no time.

For those first few weeks, to ease the transition, we mixed mashed boiled carrots or plain pureed pumpkin with a splash of warm water into her kibble. We’ve also found that adding warm water to kibble helps expedite the bathroom sesh in the morning.

Plus, in the mornings she gets one scoop of plain full fat yogurt, to give her a healthy, shiny coat and to replenish good bacteria in her teeny little puppy body. This may sound strange, but she always goes for the yogurt first.

…It’s striking me at this point how incredibly spoiled this puppy is. #firstworldproblems

We feed her three times a day, and each time:

One fact every dog owner knows…dog treats are EXPENSIVE. And, truth be told, you really have no idea what’s in them. We decided to make homemade puppy training treats for Barley, because they’re much cheaper and very likely healthier. Plus, I enjoy the fact that I don’t feel like I have to wash my hands every time I touch these treats–which is more than I can say for your average “Beggin’ strip” or Milkbone.

This awesome recipe comes from Use Real Butter, and Barley’s a big fan. Use Real Butter recommends cutting shapes out with cookie cutters, but since we wanted to use these treats for training, we decided to make them smaller by just cutting small squares–mini cookies!

There are only four blessed ingredients involved:

Preheat the oven to 350°F. Add all the ingredients to the bowl of a stand mixer. 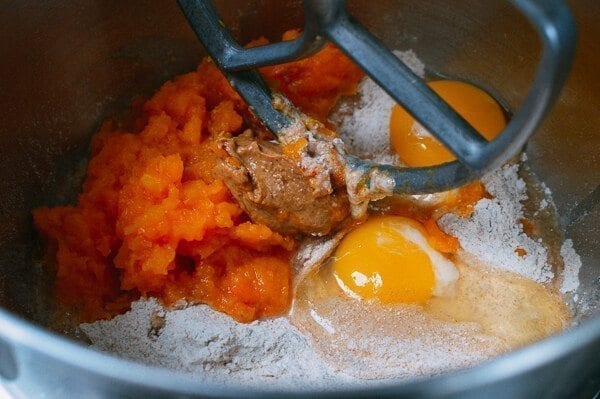 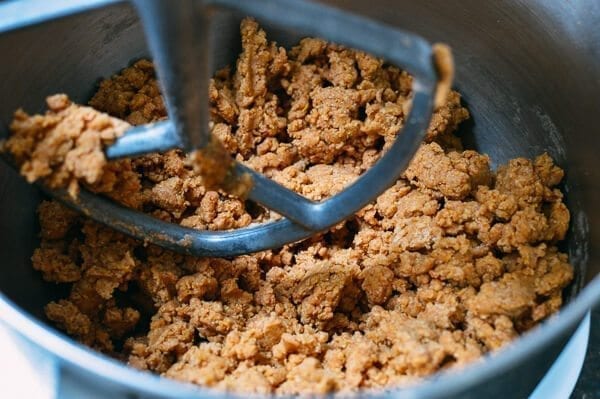 If it’s a little dry, add some water. If it’s wet, add a little more flour. Knead the dough together on a clean surface and roll it out really thin (between 1/8-1/4 inch thick). 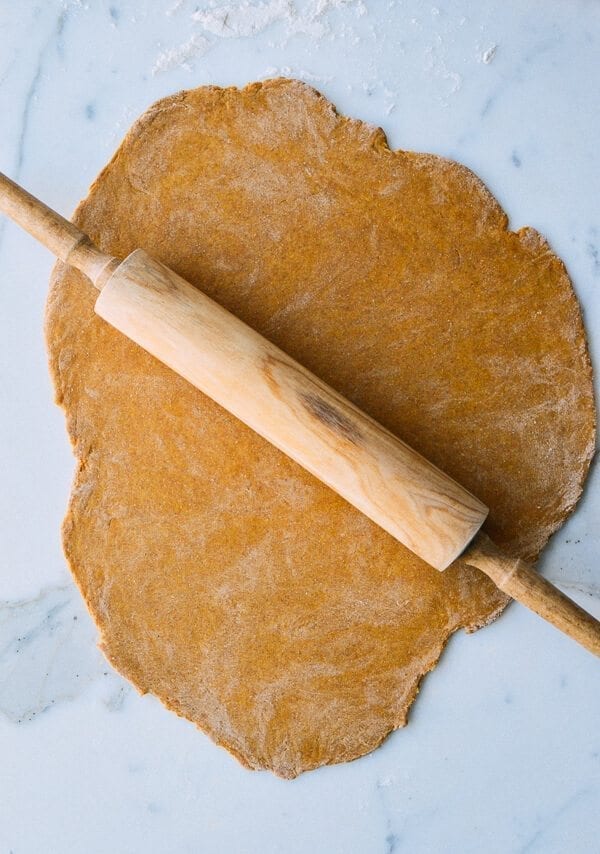 Cut squares and continue rolling/cutting until all the dough has been used. 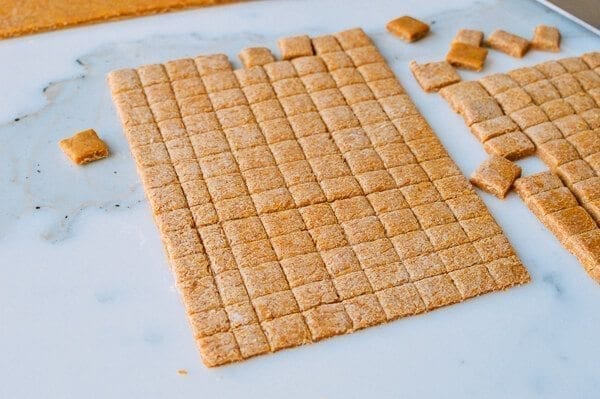 Transfer to an ungreased baking sheet and bake your puppy training treats for 25-30 minutes. It may take a little longer for these to get really crunchy, depending on the size and thickness. 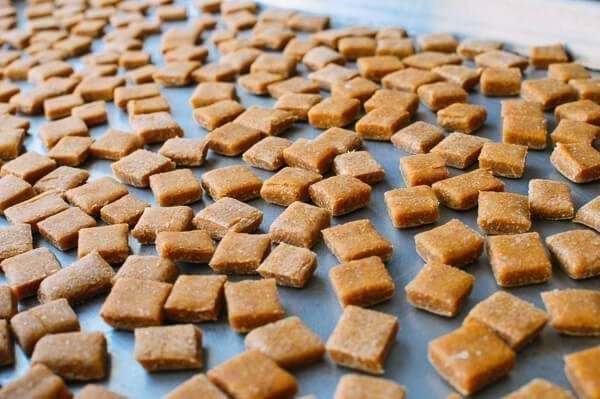 Once cooled completely, transfer to an airtight container and store for up to 2 weeks.

And that’s it for making these puppy training treats! 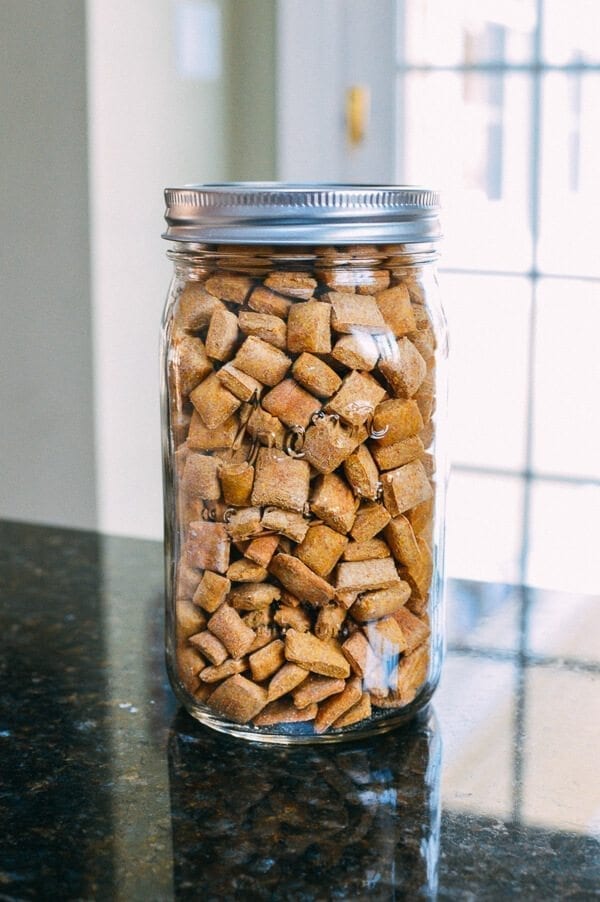 Did I mention that Barley loves these? 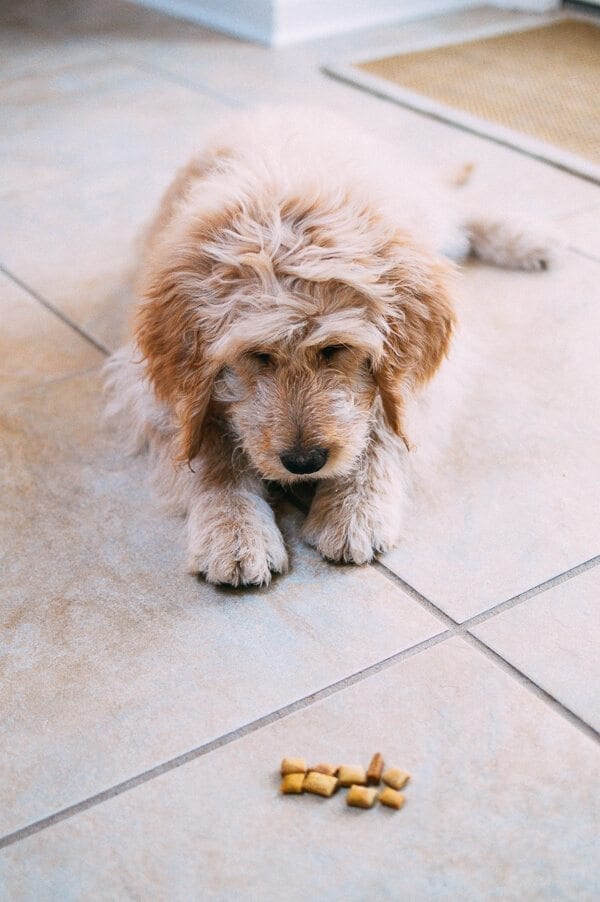 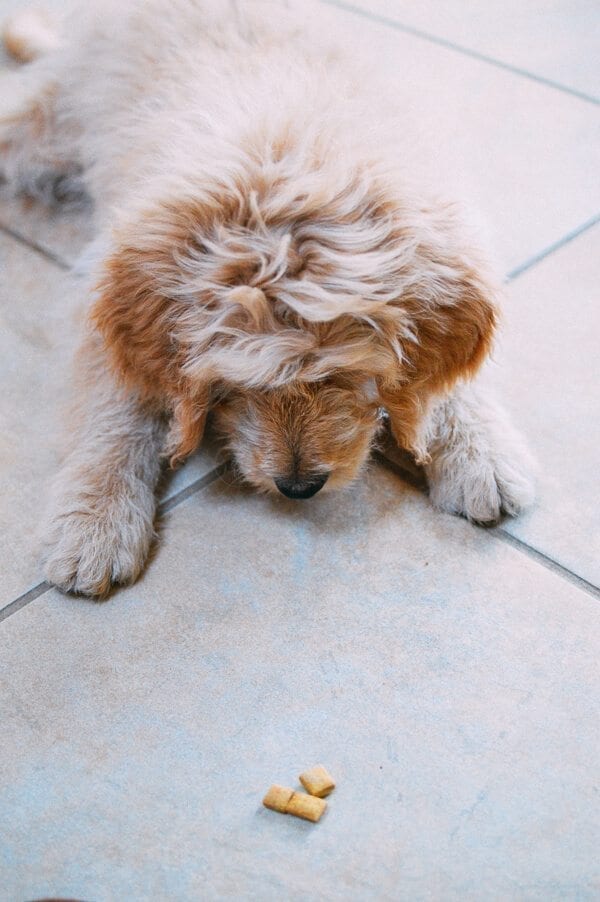 Barley's Favorite Pumpkin Peanut Butter Homemade puppy Training Treats. We made puppy training treats for Barley because they're much cheaper and healthier than store-bought versions
by: Kaitlin
Course:Dog treats
Cuisine:American 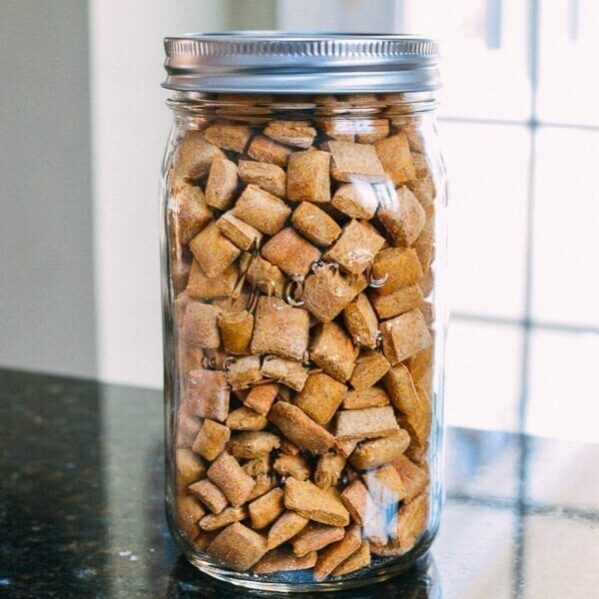 Transfer to an airtight container only after the treats are completely cooled. Use within 2 weeks.  Note,