Got Goulash? Budapest: The Final Leg. 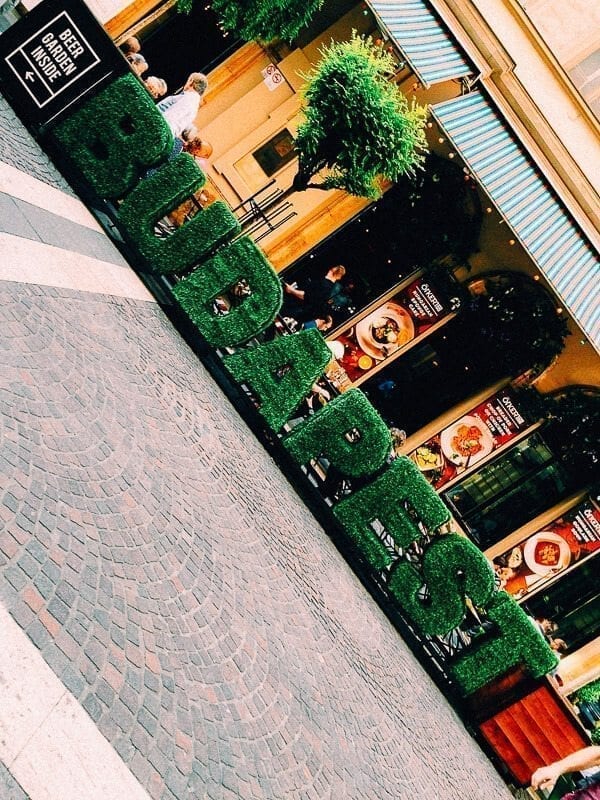 After saying farewell to Sarah in Rome, my cousin Kim and I, thoroughly tired of eating pasta and pizza (though heartbroken over our loss of our once-a-day-every-day gelato), headed over to Budapest for our final change of scenery and, yes, some goulash. (For more on our trip to Europe, check out these posts from Munich, Prague, Greece, and Italy).

Budapest was one of those cities where we really didn’t know what to expect beyond the “Things to Do in Budapest” slider on Google. Upon arrival, however, we quickly realized that it was one of the most beautiful cities from the trip, with its amazing art nouveau architecture, old world feel, and casual atmosphere.

First order of business for traveling in Budapest was a trip to the market, specifically Central Market, a beautiful hall filled with food, trinkets, and fresh produce, conveniently located a few minutes walk from our Airbnb on the Pest side of the city. 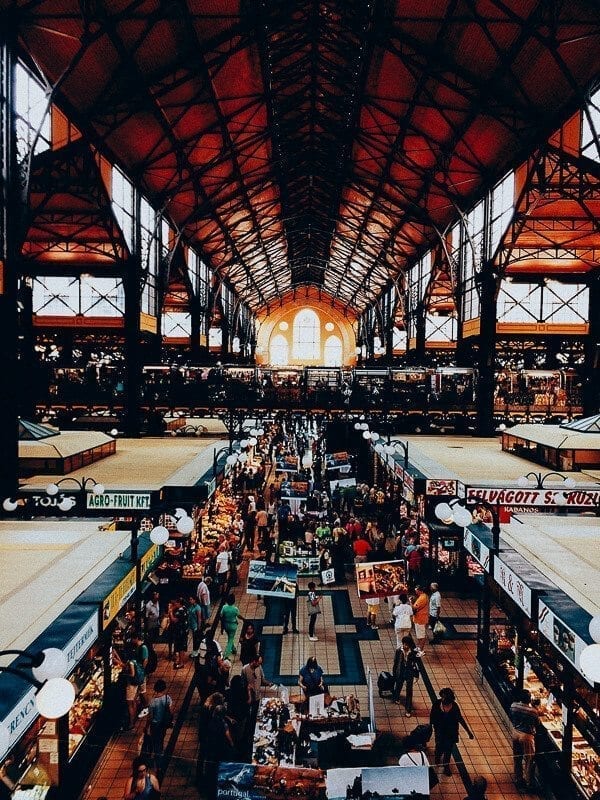 At every turn there were vendors selling paprika of all kinds and plenty of dried red peppers. 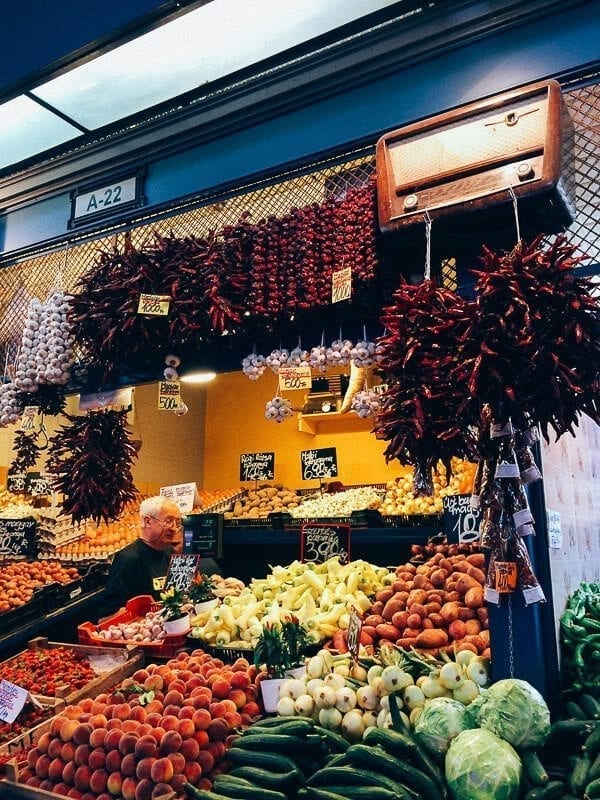 Of course, we had to sample the local fare. 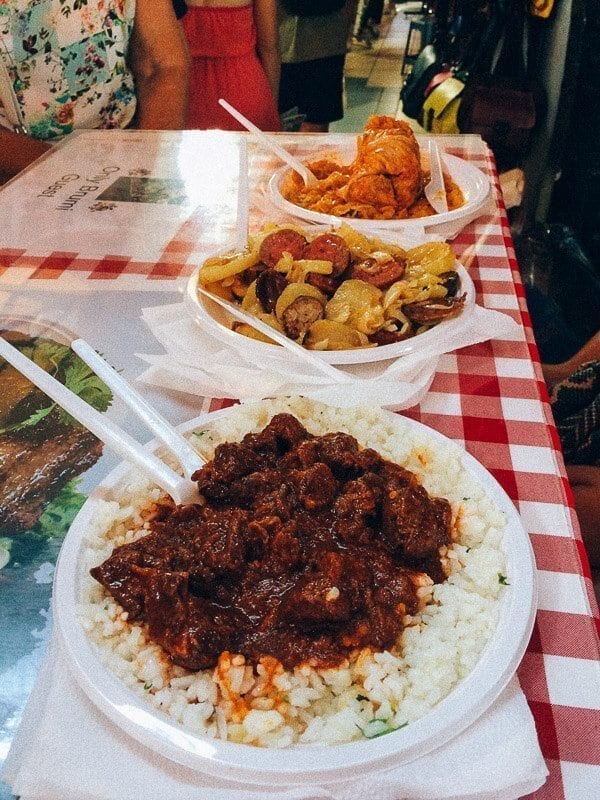 Check out that goulash, sausage and potatoes, and stuffed cabbage. Excessive? Perhaps. Hearty, delicious, and life-affirming? Definitely. (And in our defense, we saved the leftovers!)

From there we walked over to the Liberty Bridge to cross over to the Buda side. A quick trolley ride to the top and we were met with amazing views of the Pest side of the city. 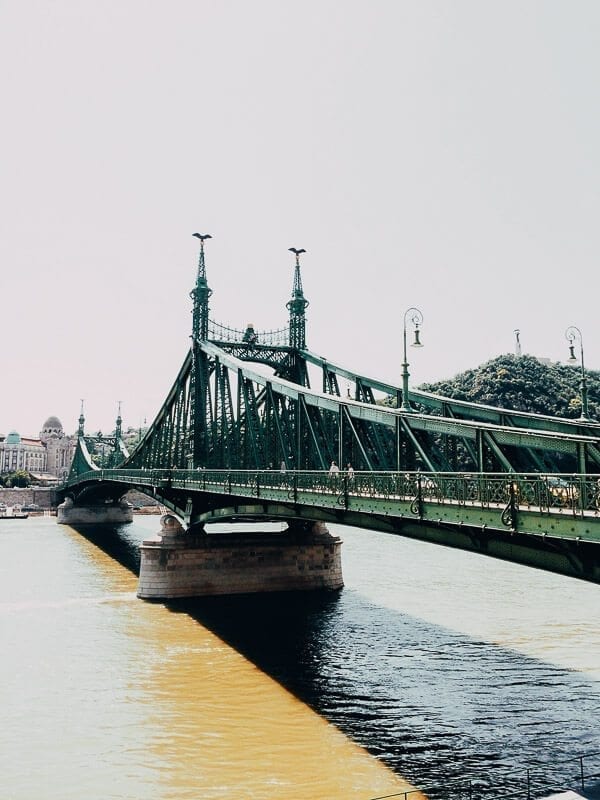 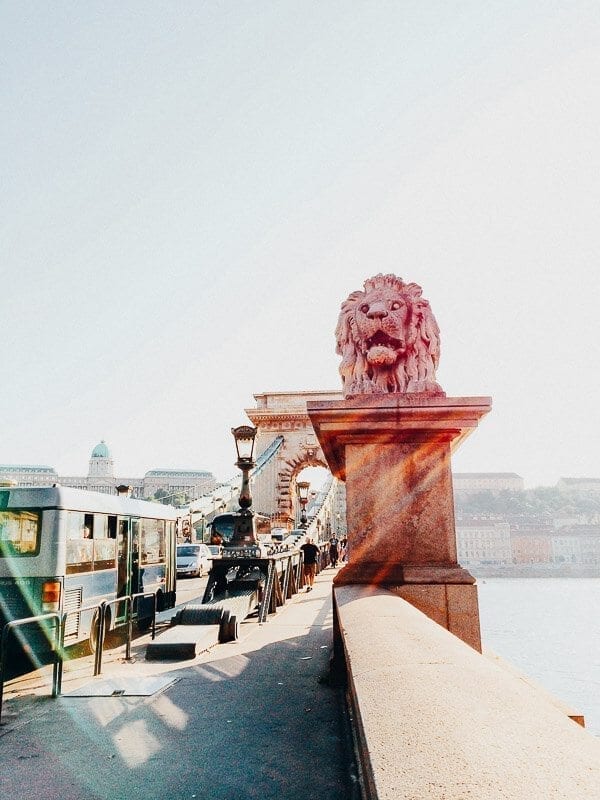 Walking through the castle complex, there were more spectacular views and architectural details. 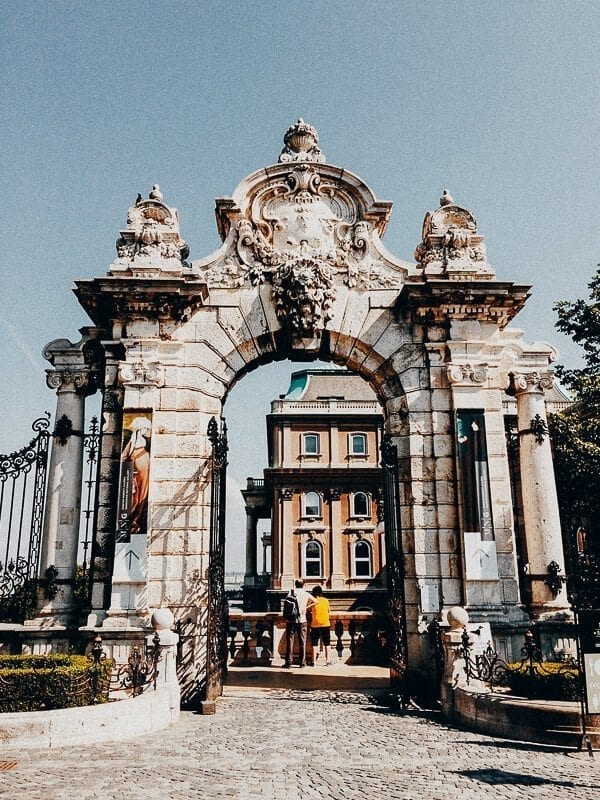 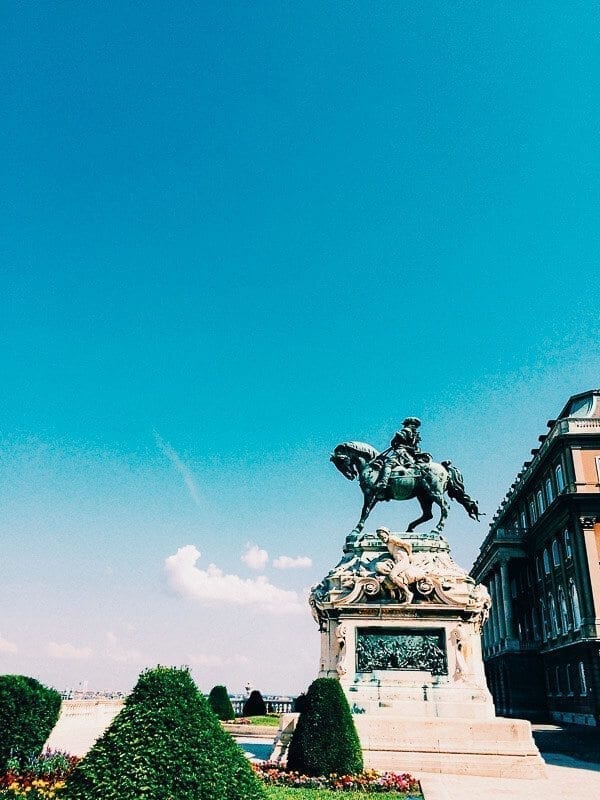 We also took a spin through the museum to burn a few of those awkward afternoon hours. 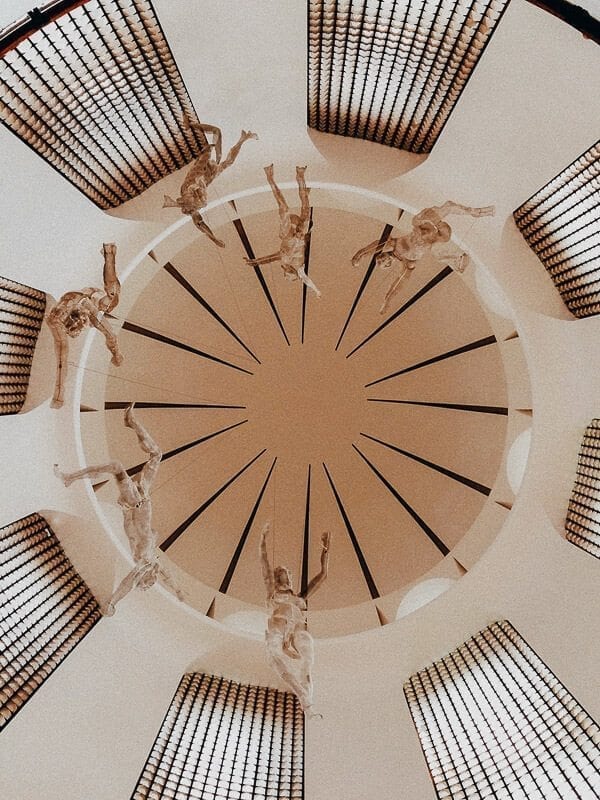 From there we climbed our way up to the top of the hill to see Matthias Church and Fisherman’s Bastion. Both were spectacular, with their orange, turquoise, and pink tiled roofs and golden accents.

From there we decided to head over to the Jewish Quarter for dinner. On the zigzagging path down the hillside, we glimpsed a great view of the Parliament building across the river. 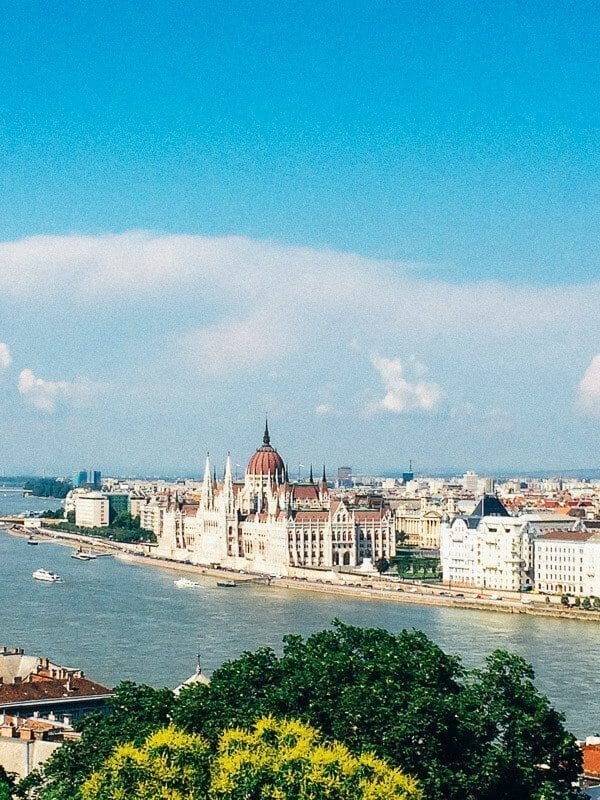 After a few difficulties we snaked our way through the winding streets of the Jewish quarter to the restaurant. 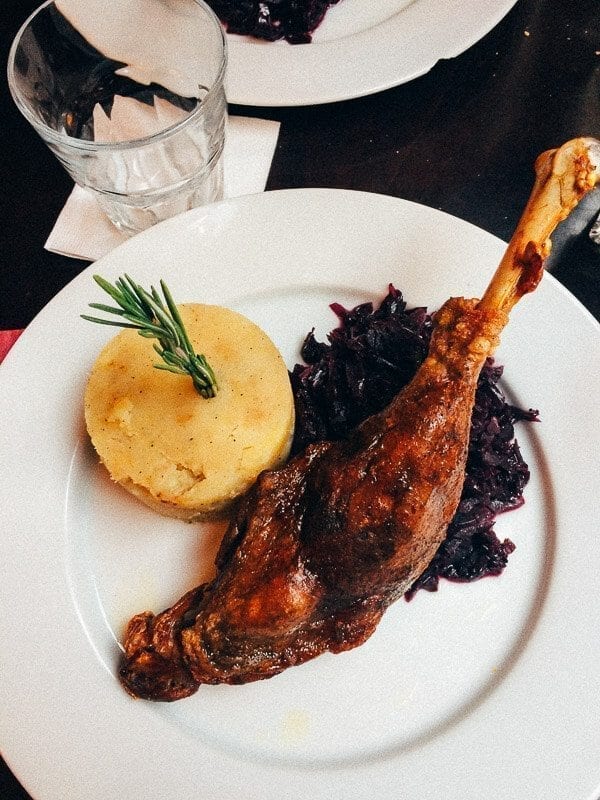 Nothing like a crispy leg of goose, mashed potatoes, and purple cabbage to soothe a couple of achey tourists.

The next day we decided to head back to the Jewish Quarter, this time to see the Dohány Street Synagogue, the largest in Europe. As someone who’s had the great fortune to see a lot of the best churches and cathedrals in Europe and some of the biggest temples of China, I can safely say that this was definitely one of the most amazing houses of worship I’ve ever been in. The golds, pinks, and blues or the mosaics and the geometric stained glass windows were a refreshing departure from many of the churches we had seen on the trip. 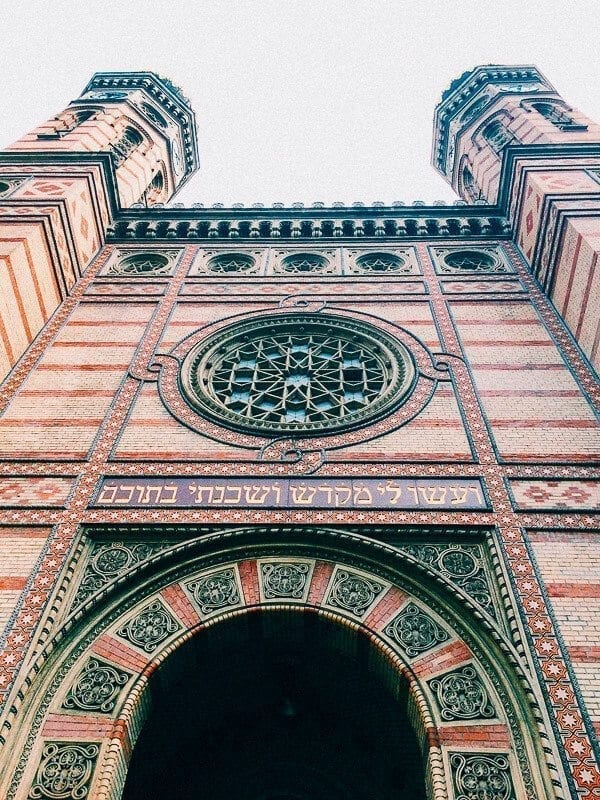 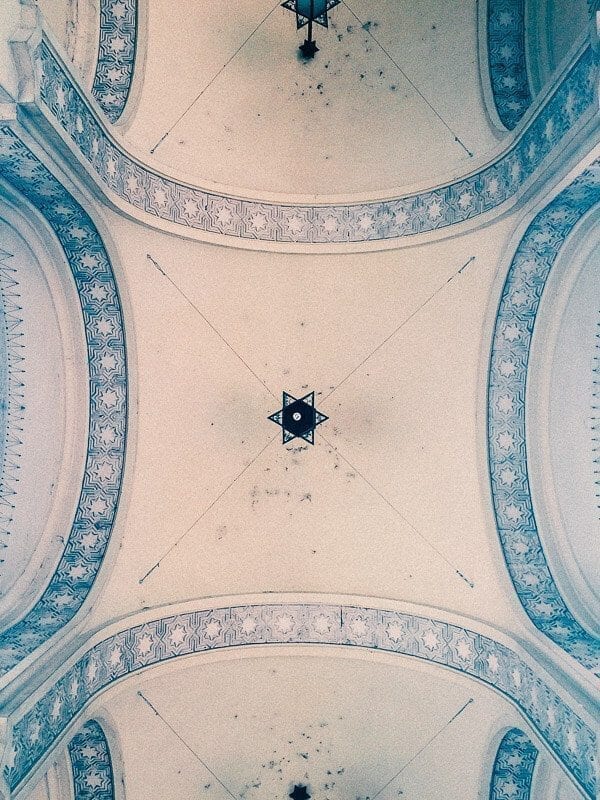 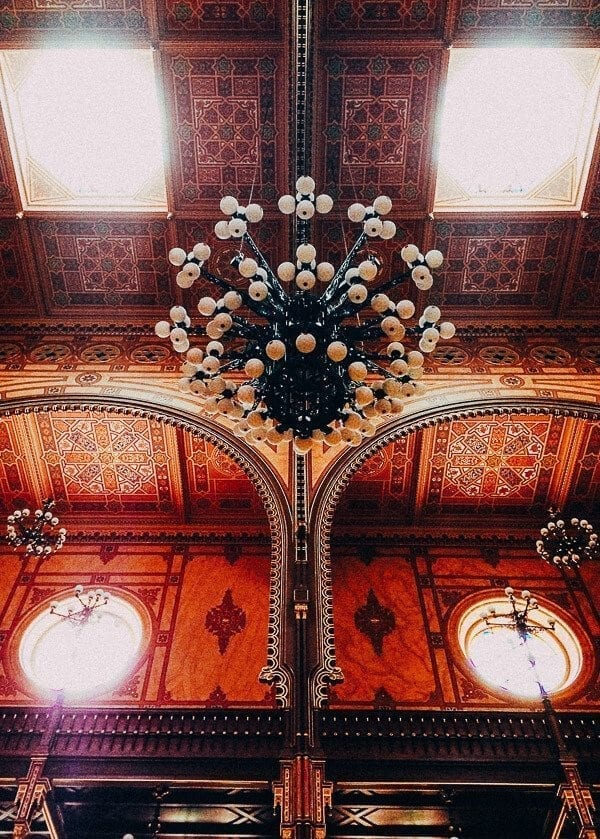 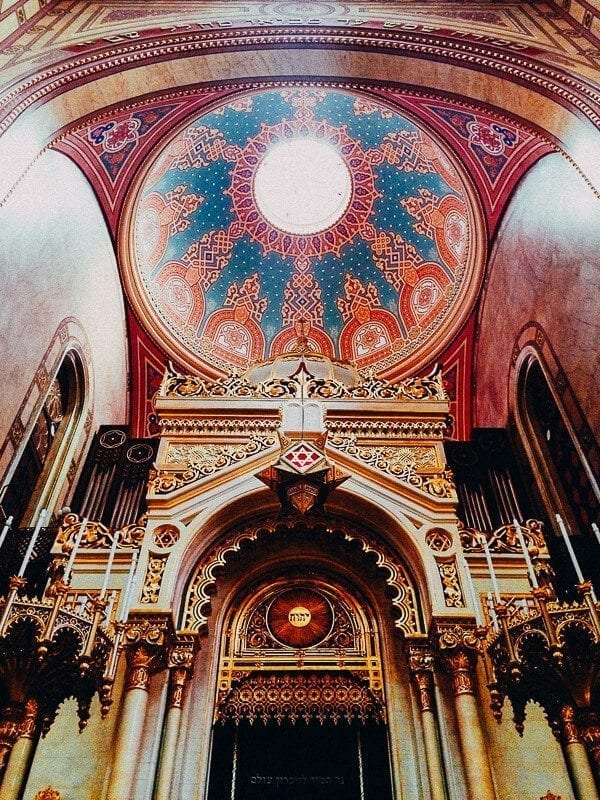 Behind the Synagogue was a memorial garden honoring those who died in the Holocaust. A large metal tree bore the names of Holocaust victims etched on the leaves. 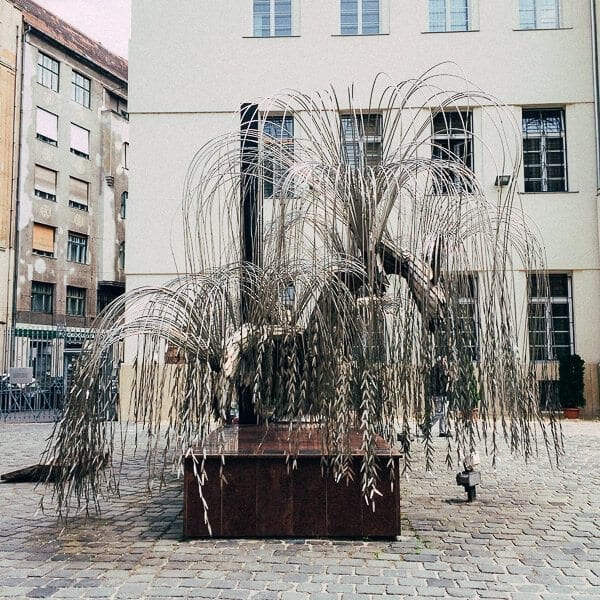 From the synagogue we took a ride on the subway over to Andrássy Ut, a wide and beautiful tree-lined avenue with plenty of luxury shops and the Hungarian State Opera House.

We stopped inside one of the department stores to feel that patented mix of ambition, inferiority, and pure unadulterated shoe and bag envy that only luxury goods can impart upon two very-nearly-broke-from-their-european-adventure recent college grads. 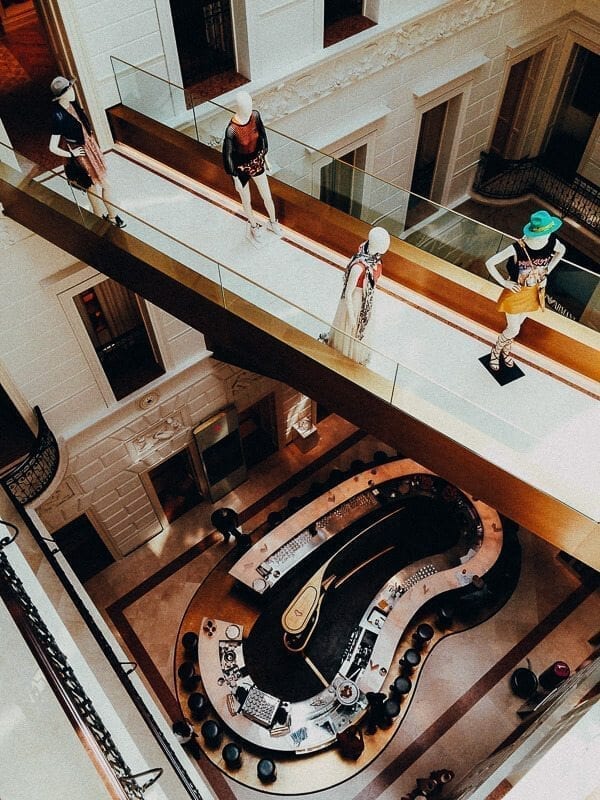 We decided to get a cheap thrill by walking into the opera house, which inspired images of grand masters debuting classic operas to Hungary’s old world elite.

The interior made us want to don our best (and nonexistent) fur coats, grab our golden binoculars, and see an opera, dangit! 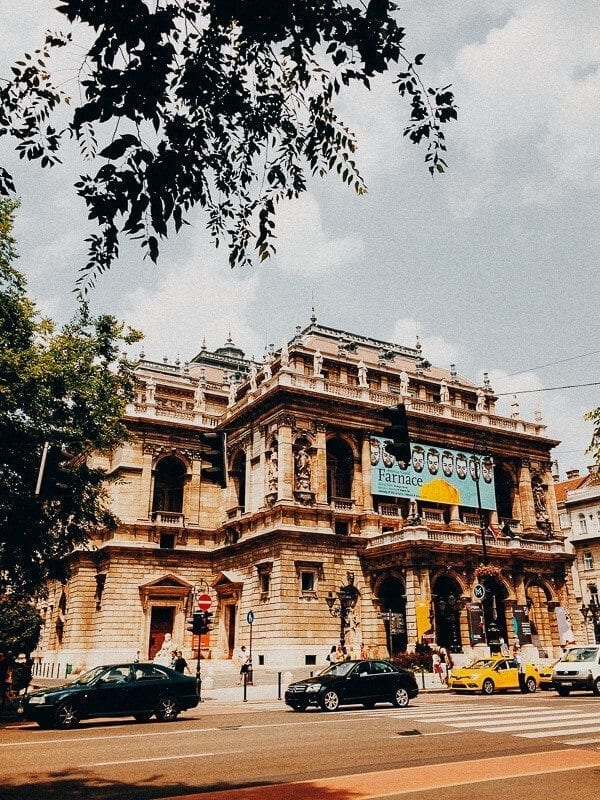 Sadly the earliest show would be the next night, at which time we’d be on a plane back home. (To anyone going to Budapest soon, plan for an opera night! It will not only be enjoyable but it will also make you feel like a million bucks—I just know it.)

We whiled away the afternoon hours with a walk through the area between Andrássy Ut and the Jewish Quarter. 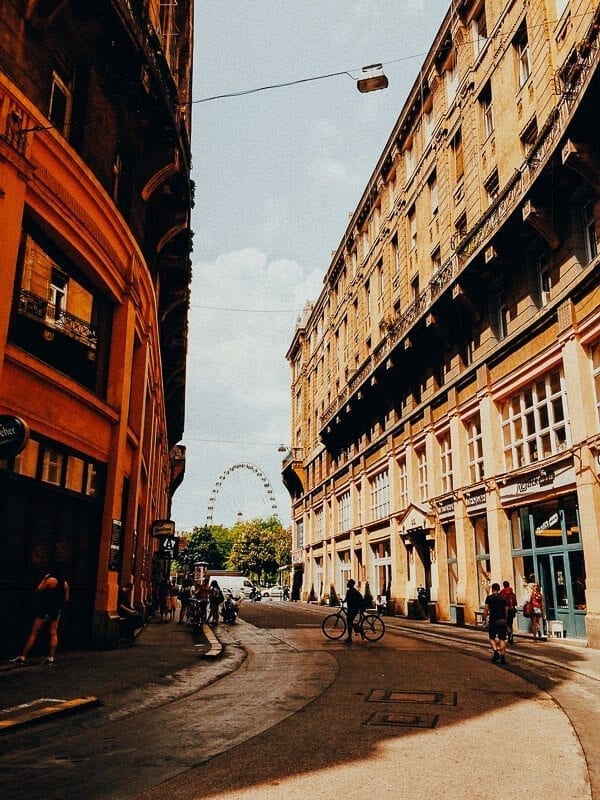 The city’s young people were out in droves, soaking up the last rays of sunlight and enjoying after work drinks in the shadow of a huge ferris wheel. 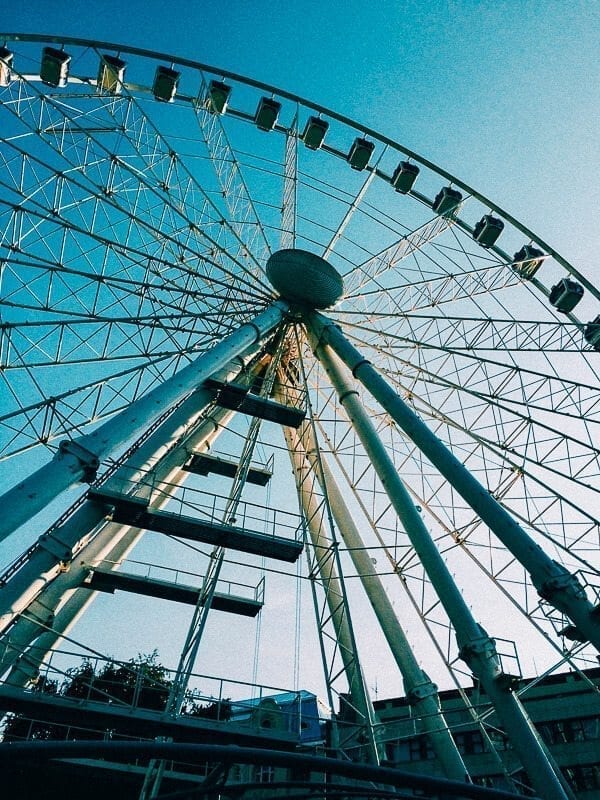 This time, as we pass into the Jewish Quarter again, we welcome the familiar decompression of the rather strict art nouveau formality of the architecture in the city beyond, and welcome the slightly artsier and relaxed atmosphere. 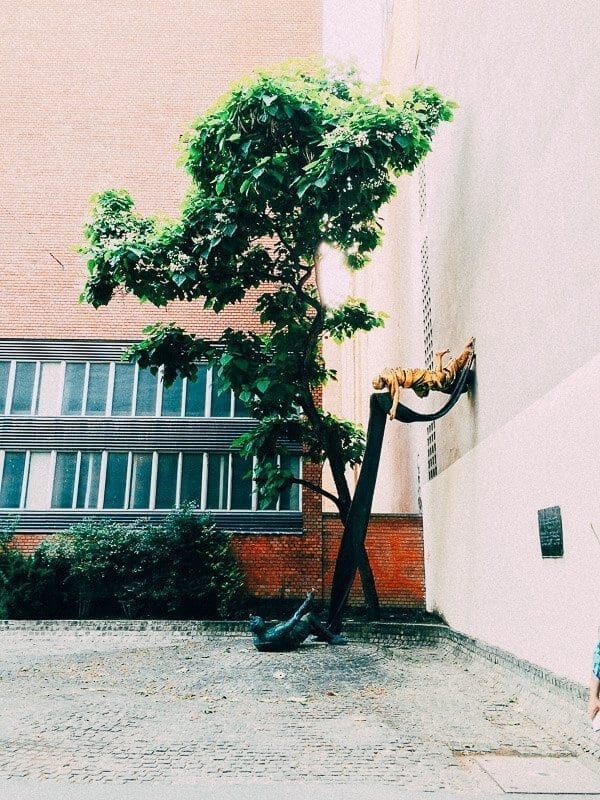 At this point we notice, with glee, that we’re starting to feel a bit more like locals, casually dropping phrases like “oh, hey, we should just take Dob utca to get to the bar” without obsessively poring over a map first.

We settled in for dinner at Mazel Tov, one of Budapests many “ruin pubs” in the Jewish Quarter. The ambiance wasn’t too shabby. 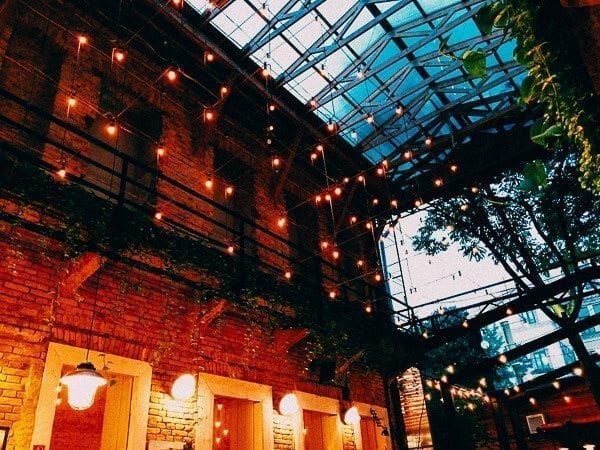 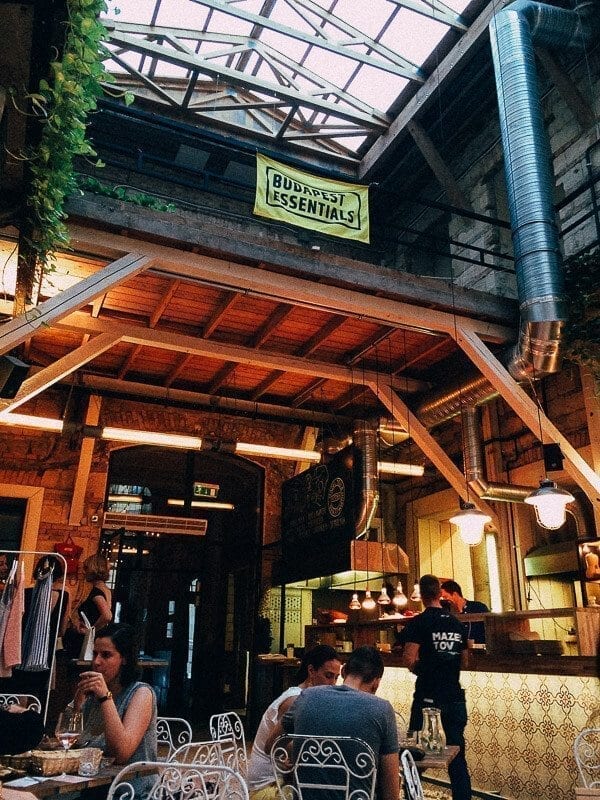 Which is to say, it was filled with magical light and whimsy and anyone going through Budapest should go there.

Elderflower lemonades and rosé were definitely in order. 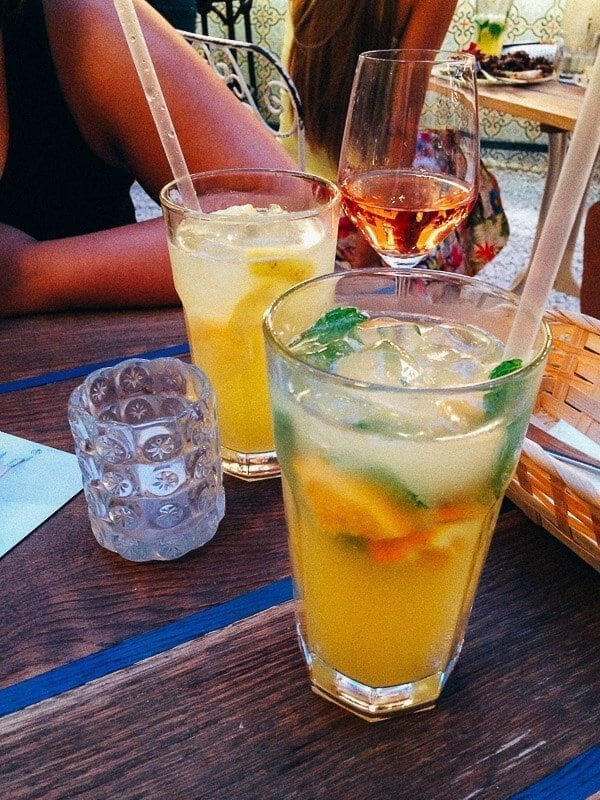 As were falafel and chicken shawarma with herby beets. Both, of course, were delicious. 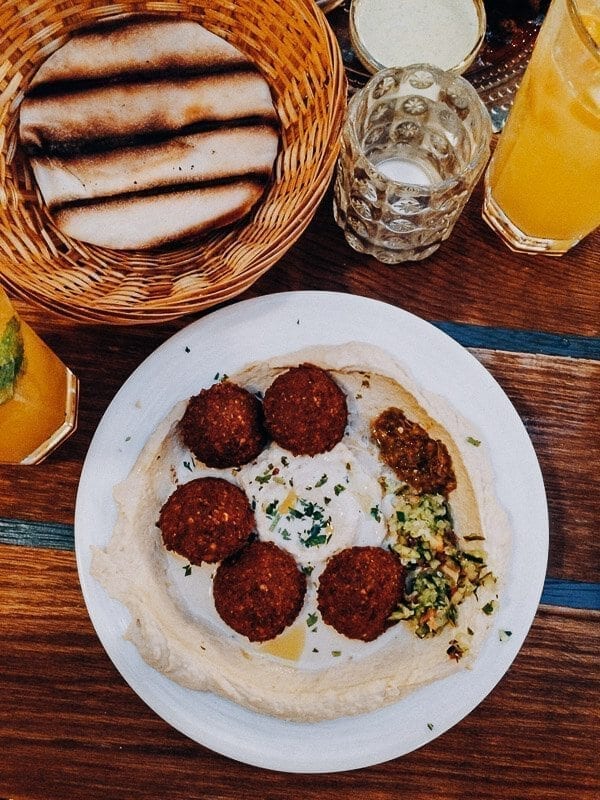 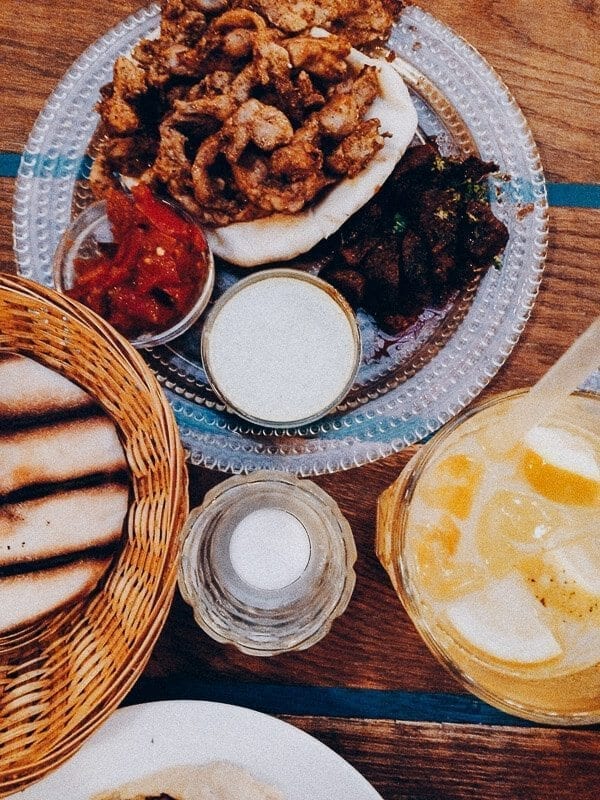 On our final day, we packed our bags for home, decidedly sad to be leaving Budapest (not to mention Europe) so soon. Twas the end of a long, glorious, tiring, relaxing, crazy trip. If you haven’t already, check out our other posts from Munich, Prague, Greece, and Italy! 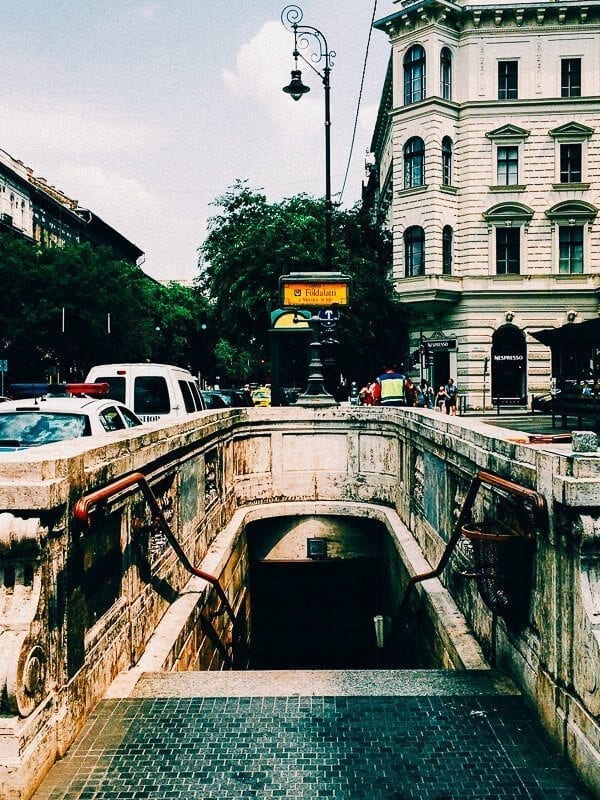 With migrants from not just Syria, but also Afghanistan, Serbia, and Eritrea pouring into many EU nations, some of our readers have expressed concern as to whether this post is appropriate given the current situation. We’d like to take this opportunity to address our thoughts on the crisis, this post, and the entire travel series.

Across Europe, migrants are facing extreme hardship to find safe harbor for their families and a happier future. When preparing these posts, we thought about whether they should be published given the circumstances. Ultimately, we decided to share them with you all. For the four of us, The Woks of Life is a place to share our family’s traditions, travels, stories, and recipes. We’ve been lucky enough to have readers from all around the world and the chance to see how a recipe, photograph, or blog post can unearth memories and bring happiness to others.

Though the situation in Budapest is dire, as it is in many other cities around the world, it doesn’t change the fact that these places are full of things to be appreciated. Whether it’s Europe, China, here in the United States, or anywhere else in the world, we never want to silence our appreciation of any city filled with fascinating culture and people. For us, it’s important to appreciate the good, as well as seek to understand what is flawed.