by: Everyone
30 Comments
Jump to Recipe 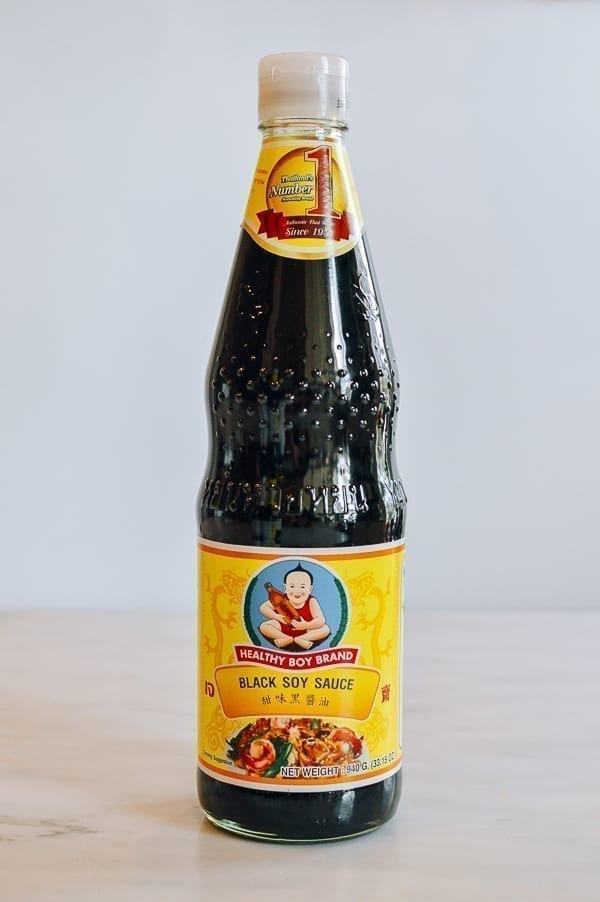 Thai soy sauces are similar to Chinese soy sauces in that there are both dark and light varieties. However, there are some key differences. Some say Thai soy sauce isn’t as briny or harshly salty as Chinese/Japanese soy sauce, because the salty flavor is balanced by sweetness from added sugar. Thai cooking, after all, is all about balancing disparate flavors!

If you enjoy cooking Thai dishes like pad see ew or drunken noodles in addition to our Chinese recipes, you may want some of these Thai soy sauces in your pantry to achieve the most authentic Thai flavors! Let’s talk about the major types of Thai soy sauce and their uses.

What Is Thai Soy Sauce? What Types Are There?

Thai Mushroom Light Soy Sauce: A version of Thai light soy sauce that is flavored with mushrooms. This can be used interchangeably with Thai light soy sauce, and whether or not you want that extra umami/mushroom flavor in dishes is a matter of personal preference. Note that this differs significantly from Chinese Mushroom Flavored Dark Soy Sauce, which is a syrupy dark soy sauce rather than an all-purpose cooking sauce.

Thai Sweet Soy Sauce (see ew wan): Like a Thai Black Soy Sauce with much more sugar added! It has a thick, syrupy consistency, dark color, and very sweet flavor. It is sometimes used in noodle and stir-fry dishes as well as dipping sauces. 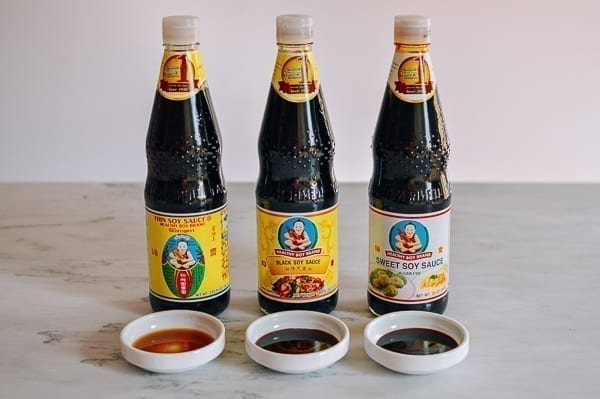 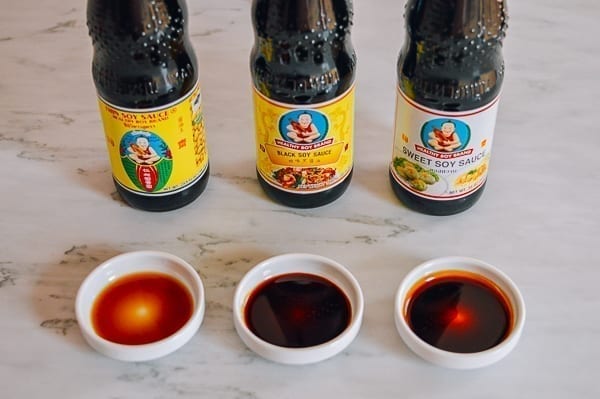 Applications of these Thai soy sauces are similar to how their Chinese equivalents are used in Chinese cooking. Thai light soy sauces (both the regular and mushroom varieties) are used to salt, flavor, and season food in stir-fries, braises, etc.

We have Thai soy sauces in our pantry specifically for cooking Thai dishes. In our Thai recipes, you’ll see that we call for “light soy sauce” and “dark soy sauce,” just like in our Chinese recipes.

You could certainly just use Chinese light and dark soy sauces for cooking Thai dishes, and they’ll still be delicious, just not as authentically Thai. For that reason, if we have Thai light/dark soy sauces available in our pantry (which we usually do!), that’s what we use when we blog Thai recipes.

Thai soy sauces can be found in Thai and Southeast Asian markets, as well as very well-stocked Chinese supermarkets (Thailand does have a significant Chinese population).

The Healthy Boy brand is what’s usually available at our local market, and it happens to also be one of the most popular brands in Thailand. 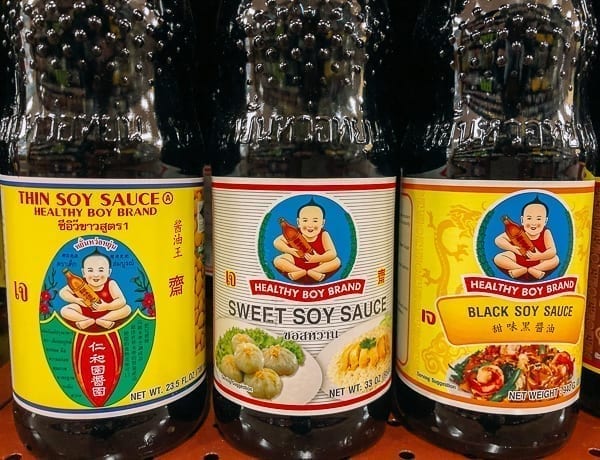 Like most of the soy sauces in our pantry, we do not refrigerate any of these Thai soy sauces. We store them well-sealed in a cool, dry spot in our pantry.

If you have further questions about Thai soy sauce types or Thai cooking in general, let us know in the comments––we try to answer every single one!

Note that we haven’t extensively covered soy sauces from other southeast Asian countries in our glossary. If you’d like to learn more, check out this interesting and helpful Kikkoman-sponsored report written by Food Researcher Nami Fukutome about soy sauce usage in Thailand as well as the Philippines and Vietnam.

How to make your own Thai Soy Sauce substitute if you can't purchase Thai soy sauce
by: Everyone