by: Kaitlin
0 Comments
Jump to Recipe 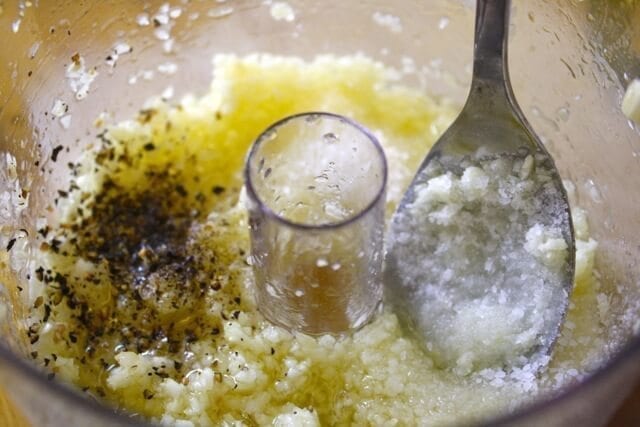 UPDATE: Check out the recipe for the marinade AND how to roast your turkey! (Note: in this recipe, I really should have pulverized the garlic until it really became a smooth paste, but the food processor I was working with wasn’t cooperative. Check out the other recipe for more info!)

Ahh Thanksgiving. That sweet sweet time of year when we students get to peel ourselves off of our sticky, coffee stained desks, dust off the end of semester mix of procrastination, shame, and terror, and enjoy…some turkey.

Thanksgiving has always been a big tradition for our family. There’s always the traditional spread–turkey, stuffing, mashed potatoes, green beans, gravy, and cranberry sauce. But then sometimes, as with Thanksgiving spent here in the US with my grandparents while the rest of the family is in Beijing, there’s the nontraditional Chinese fare—the braised bork belly, Chinese veggies, and any other random dish that my grandparents and great aunt favor at the time.

This year, Thanksgiving was held at my cousin’s place. When it was just me representing our family at the turkey table, I led the charge on Thanksgiving dinner.

So naturally, this year, at the beginning of November I started to talk menu with my cousin (who would be hosting the Thanksgiving-Shanghainese Extravaganza). Imagine my surprise when she said, “Hey we even got a Turducken!”

That was my initial reaction anyways. But after the shock of not having a traditional turkey, I warmed up to the idea. After all, it is one of the many hipster-y food gimmicks one has to try; Kind of like a bad fashion trend.

A chicken stuffed inside a duck stuffed inside a turkey may sound like a freak of nature, but you have this inexplicable need to try it for yourself–like ponchos, or gauchos (just say the word “gaucho” to Sarah and it will summon feelings of shame and remorse like you would not believe).

Well, to say the least, the turducken experience was…disappointing. We spent a lot of time hemming and hawing over cooking time, internal temperatures, and faulty thermometers. It ended up overcooked. Sigh. I kept on eating chicken thinking it was turkey, and there was general consensus that the duck tasted like a bad cut of beef liver.

On top of that it was completely unclear as to whether or not the dang thing came pre-seasoned. It didn’t (this was deduced after a highly scientific sniff test to see how “salty” the bird smelled. Sounds hokey, but it works!). So even though I didn’t have our traditional turkey, the silver lining was that I did make the traditional marinade.

This recipe was passed down from my grandpa on my father’s side. All those years as head chef of the Holiday Inn restaurant gave rise to the BEST turkey marinade ever. It consists of 4 simple ingredients: salt, pepper, a crapton of garlic, and olive oil.

My mom would marvel at the flavor—the juiciness!—of my grandpa’s turkey, and was surprised to find out how simple it was. Needless to say, this is our go-to marinade for Thanksgiving turkey.

No orange zest, no fancy shmancy seasonings, and no shmearing three tubs of butter all over the place. Nope–just the holy trinity plus some oil to loosen up the party! Sometimes we’ll use this as a base and jazz it up with a few extra herbs and things, but often we’ll just use this very simple marinade.

And even though we were separated by continents and thousands of miles, we know that this recipe was used at both of our Thanksgivings.

Here’s the recipe, suitable for a 14-pound turkey :

How to make it? The night before Thanksgiving, simply put the garlic in the food processor… 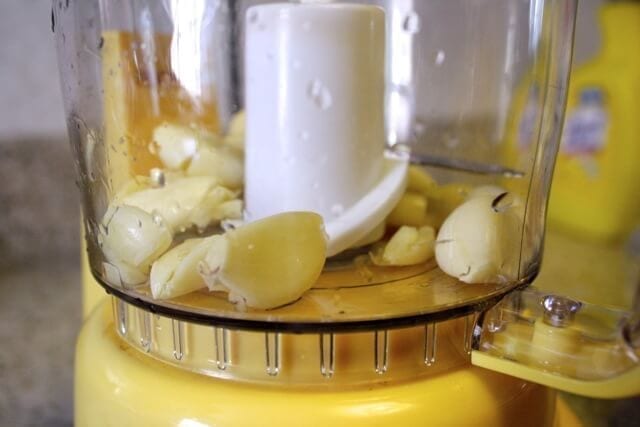 Chop it up finely. If you have a garlic press, that also works well. Or, you could go the old fashioned way and just use a knife and chopping board. 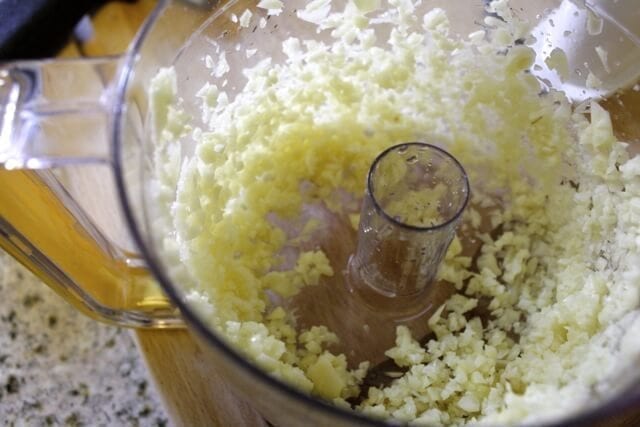 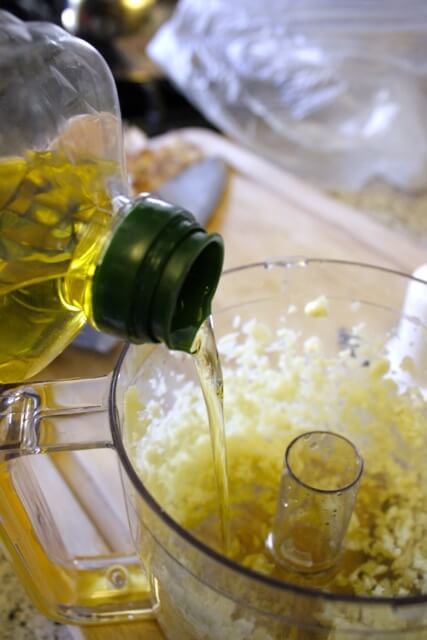 And salt and pepper. Process until well-combined.

Rub it into your thanksgiving bird, refrigerate it over night, and it’ll be ready for roasting on the big day. 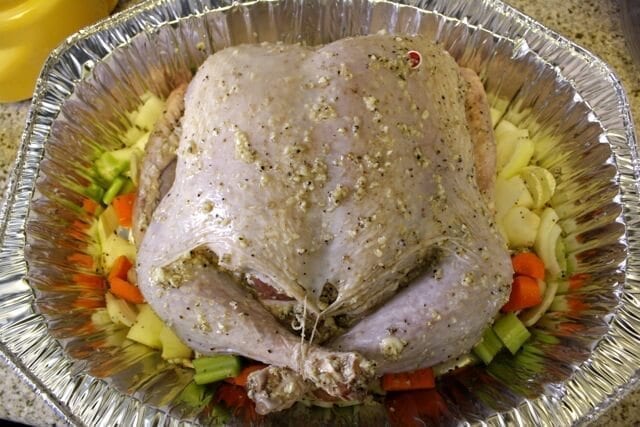 Here’s the US extravaganza: 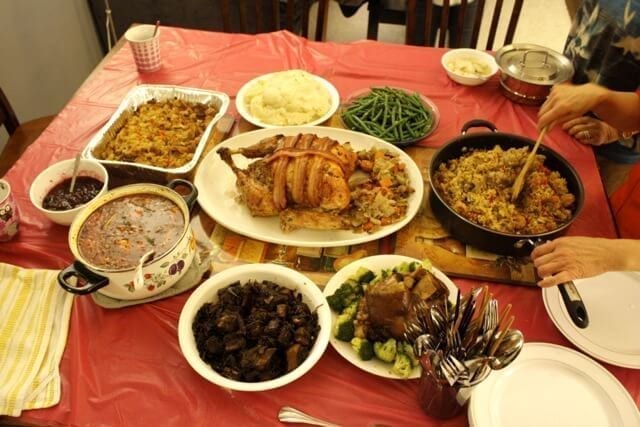 And the one in Beijing, where we shared the American tradition of Thanksgiving with some international friends: 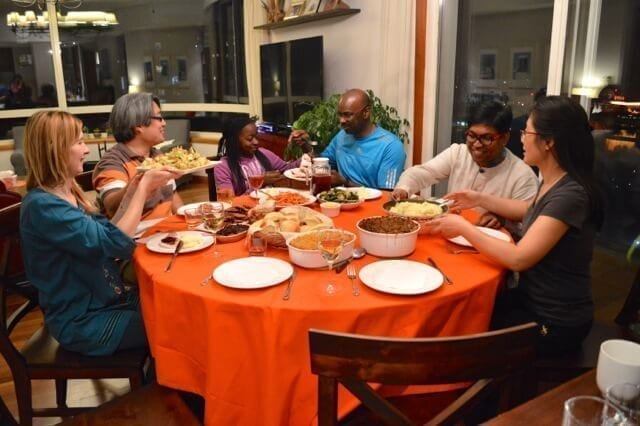 Our family's roast turkey marinade, every year, without fail!
by: Kaitlin
Cuisine:American 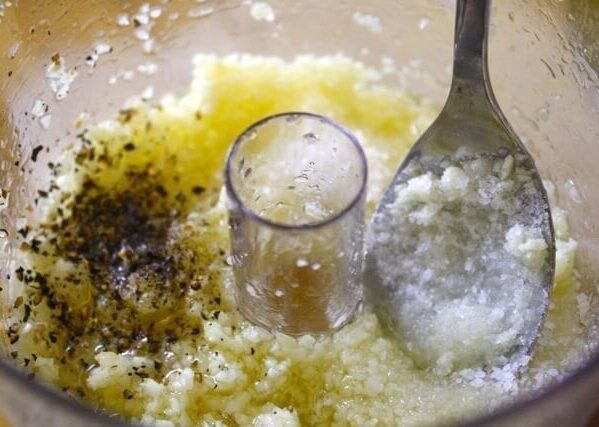