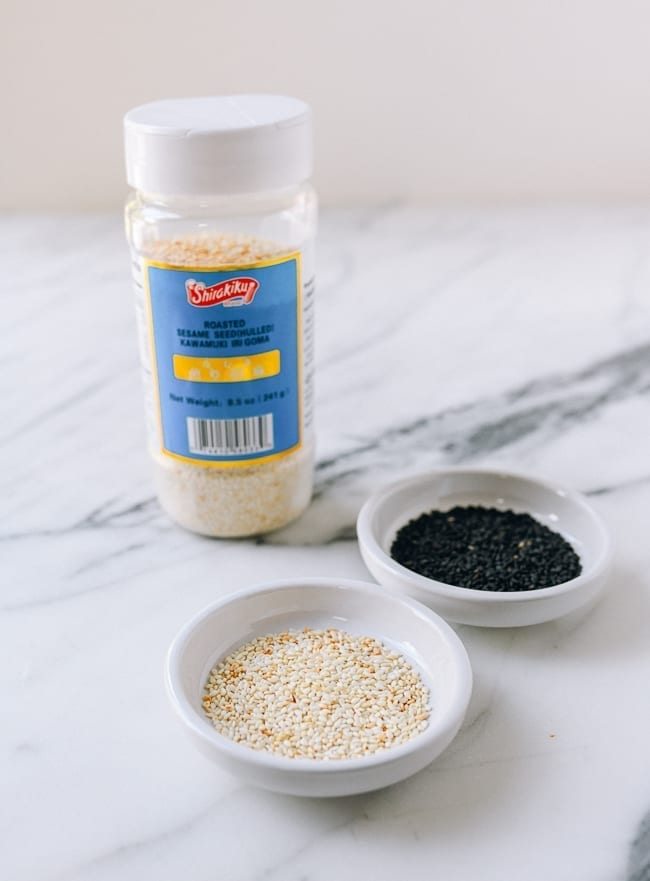 Sesame seeds (zhīma, 芝麻) are a must-have in your kitchen. They are super versatile as an ingredient because they are so mild, with both sweet and savory applications in Asian, Mediterranean, and Middle Eastern cuisine.

In this article, we’ll talk about the subtle differences between black and white sesame seeds, and everything else you need to know about cooking with them.

What Are Sesame Seeds?

Sesame seeds are small, oily seeds that form in pods on a flowering plant native to Africa, Asia, and the Middle East. The use of both the black and white versions in cooking is fairly widespread across these regions as a result.

The difference is mostly in appearance rather than flavor, but some say the hull lends a slight bitterness to black sesame seeds, while white sesame seeds are sweeter. Both types of sesame seeds have a pleasant nutty flavor.

How To Use Sesame Seeds?

Honestly, a better question might be “how can you NOT use them?” So many dishes on our blog feature sesame seeds!

They are an excellent garnish for stir-fries, salads, and noodle dishes (like our Cold Sesame Noodles) due to their mild nuttiness and delightful crunch. The crunch factor is also prominent in our Shanghai Da Bing Sesame Pancakes and our Chinese Ribs with a Sesame Crust.

Of course, the versatility of sesame goes beyond just the seed. Sometimes sesame seeds are ground into a fine powder for confectionary uses like the coating of mochi or as a filling.

Sesame oil and toasted sesame paste are also in our Sesame Chicken, lending a subtle sweetness to the dish that balances out the slightly acidic and savory flavors.

Raw sesame paste, also known as tahini, is a popular condiment in Mediterranean and Middle Eastern cuisine (hummus, anyone?).

White sesame seeds are generally favored in cooking, or at least more common.

Black sesame seeds, however, have a multitude of uses, especially in Asian desserts. Try our recipe for Tang Yuan, sweet rice balls with a filling made of ground black sesame seeds, which create a unique flavor and appearance in this classic Chinese New Year treat.

No matter how you decide to use them, we recommend lightly toasting them first. You can do this by placing the seeds on a sheet pan in the oven at 350°F/175°C for a few minutes or heating them in a dry pan over medium heat.

It doesn’t take long––a few minutes (check frequently to prevent scorching) is usually enough to brown them and amplify their lovely, nutty aroma.

Sesame seeds are available in the spice section of most grocery stores. You’ll find that bottles of white seeds, black seeds. You may also see “Tuxedo” (both white and black) mixes.

It is also possible to buy them in bulk at Asian and Middle Eastern markets and some specialty health and spice shops. Of course, you can also source black and white sesame seeds (as well as powder, oil, and paste) online, but you’re likely to pay a higher price.

Buying sesame in bulk from Asian stores will almost always be cheaper. Just be aware that they will become rancid after a while because of their high oil content (they consist of about 50% oil).

There are too many to count! Here are just a few of the recipes we love that show off the versatile uses of both black and white sesame seeds.