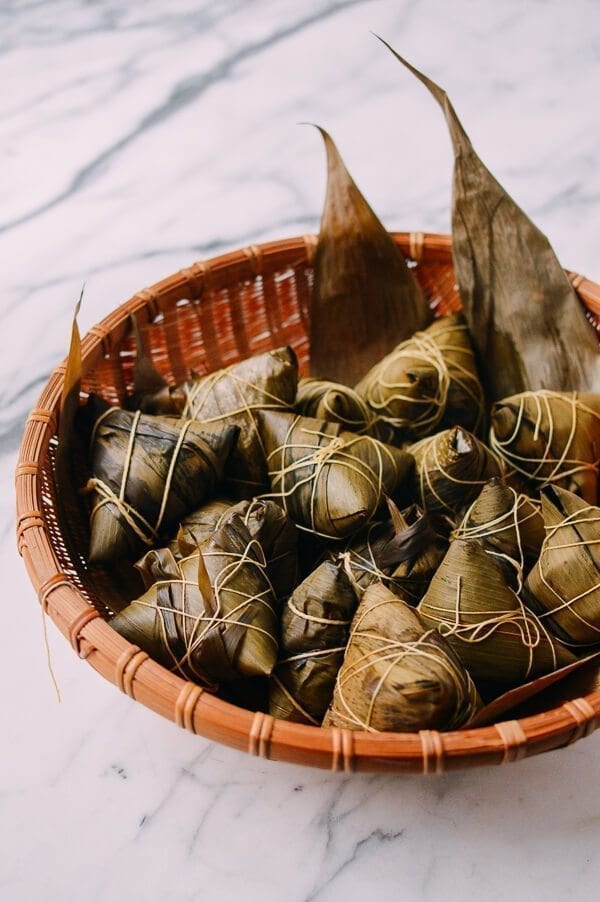 The Dragon Boat Festival is coming up (It will be on Monday, June 14th this year), and that means it’s time to make Zongzi, or sticky rice dumplings! Luckily, we have a few zongzi recipes you can try, including savory and sweet. We also have a lazy version for those of you who aren’t feeling up to all that wrapping.

Read on to find out more about the Dragon Boat Festival, why we eat zongzi, and our favorite recipes for making them.

What Is the Dragon Boat Festival?

The Dragon Boat Festival is a traditional Chinese holiday that has been celebrated for centuries. In Chinese, it is known as the Duan Wu Festival or Duānwǔ Jié (端午节).

The holiday occurs on the 5th day of the 5th month of the Chinese calendar, and on the Gregorian calendar, it usually falls in June (though it can sometimes be in May).

The origins of the festival are kind of fuzzy. There are a few different origin stories, the most popular of which is that the festival commemorates an ancient Chinese poet named Qu Yuan.

Qu Yuan was not just a poet, but also an advisor to the State of Chu during the Warring States Period. Jealous officials falsely accused him of conspiracy to have him expelled from court, and he was subsequently exiled.

Long story short, Qu Yuan committed suicide on the 5th day of the 5th lunar month by jumping into the Miluo River. The local people believed him to be an honorable man. They searched for him in boats along the river, throwing rice balls into the water for the fish to eat so they wouldn’t eat the poet’s body.

Nowadays, though, the holiday isn’t all that doom and gloom. It’s about family gatherings, an excuse to take a couple days off, dragon boat races, and lots of sticky rice!

The traditional food of the Dragon Boat Festival is zongzi. If you are of Cantonese descent, the pronunciation “joong” may be more familiar.

We think of them as Chinese tamales. Instead of corn masa, they’re filled with sticky rice, and instead of corn husks, bamboo leaves/reed leaves are used.

In addition to the sticky rice, other tasty fillings include meat, salted duck egg yolks, Chinese sausage, beans, or sweet fillings. The rice itself may also be flavored.

In China, you can find zongzi all over the place this time of year. Some families make them at home, while others just go to local stores to buy them.

That said, we prefer to make them ourselves. You can not only make exactly the fillings you like, you can also control the ratio of tasty fillings to rice!

Ok, let’s talk about our family’s zongzi recipes. My mom, being from Shanghai, has a great Shanghainese version, which she makes with dark soy sauce, and of course, pork belly. Chestnuts are another delicious optional add-in. In a way, it’s an echo of another famous Shanghainese dish—red braised pork belly, or hong shao rou.

My dad’s side of the family is Cantonese, and Cantonese-style zongzi is a bit different. There’s no dark soy sauce involved, and the fillings include not just pork belly, but also peanuts, salted duck egg yolks, and Chinese sausage.

Then there are the “alkaline” zongzi, which we call jianshui zong. This version is sweet, with a red bean filling, but what makes them super distinctive is the potassium carbonate solution that you soak the rice in. It turns the rice a deep golden color, and gives it a distinctive flavor. Served with syrup, it is a sweet treat you can enjoy right after you finish all your savory zongzi!

Finally, we have a “lazy zongzi” recipe. Making zongzi is a labor intensive process. It can take up a whole day! Just the cooking process can take several hours. While this should be a communal activity for families to do together, it may also be a bit daunting.

For those of you who might be intimidated by the wrapping process, or just don’t have time, our Lazy Zongzi recipe essentially involves steaming sticky rice with the goodies you might find in zongzi, without having to wrap everything in bamboo leaves. The texture of the rice won’t be as gooey (because you steam the rice, rather than boiling it in the leaves), but it’ll still be super tasty!

If you don’t mind wrapping your own zongzi, but want a faster way to cook them, we also have instructions for cooking Zongzi in an Instant Pot!

Check out the recipes below, and enjoy celebrating the Dragon Boat Festival with family and friends!

5. How to Cook Zongzi in an Instant Pot