Subscribe
Tap here to receive our FREE top 25 recipe book!
Home Life A Young Cook’s Library: The 5 Most Influential Cookbooks of My Childhood

A Young Cook’s Library: The 5 Most Influential Cookbooks of My Childhood

I’m a nostalgic person. I like black and white photographs. Sepia is even better. I like old, cracked things. I watch way too much American Pickers for my own good. And I keep piles of strange and sentimental junk in boxes in my closet (I have a large shoebox full of letters that I wrote to my parents from sleep away camp when I was in third grade. Every single one is the same:

I want to come home. NOW. [drawing of a sad face]

Despite this dry prose, I’ve kept them all anyway).

I got to thinking the other day about cookbooks—the books that literally taught me how to cook when I was a kid, or at least sparked my interest in food. Of course, my parents deserve credit, as does Alton Brown (Good Eats was my SHOW). But from a cookbook standpoint, these were the publications that were lying around our house—the ones I would spend inordinate amounts of time flipping through.

Maybe I was just hungry.

1. The Joy of Cooking, by Irma S. Rombauer, Marion Rombauer Becker and Ethan Becker: Where It All Started 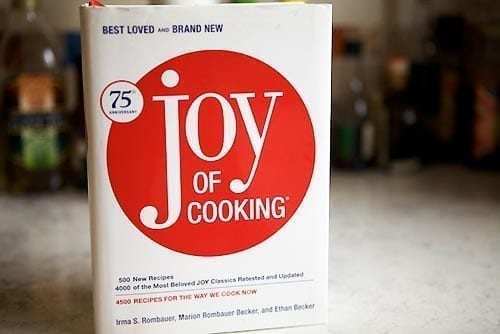 Long, long ago, before dinosaurs walked the earth and before Cronuts were a thing, The Joy of Cooking was helping home cooks everywhere master the art of German chocolate cake and mashed potatoes. I mean, with all the foodie trends (red velvet cupcakes, red velvet cheesecake, red velvet cookies, red velvet ice cream, red velvet pretzels… I kind of wish I was making that last one up) and countless recipe variations floating around the blogosphere these days (how many ways are there to make a pancake, really?), which, admittedly, is what kind of makes food blogging awesome, sometimes you do really just want to go back to one. To the beginning. To a simple, amazing homemade waffle with good ol’ butter and syrup, hold the bourbon, bacon, balsamic strawberry whipped cream and the sprinkle of quinoa and kale chips. Sometimes you just want the nostalgia that inevitably comes with a book that’s been in print since 1931 (yes, I know dinosaurs were long dead by then. It was a joke, geez).

I grew up with this book. It was this book that taught me how to cook all things American in my Chinese American household (well, 50% this book and 50% my dad, who could pull off a pretty mean prime rib from his Holiday Inn line cook days and whose banana bread was no slouch either). The Joy of Cooking seemed to me, at a young age, to contain every possible delicious non-Chinese thing one could ever want to make.

This is the book that I started baking from. My first scones! My six-month-long buttermilk biscuit phase! (I was the ten-year-old who thought biscuits were appropriate for any and every occasion from breakfasts to birthday parties. You want cake? Have a biscuit.). I would experiment with Irma and Marion’s carefully tested recipes and cook for my parents’ friends at dinner parties. Our copy of Joy started as a beautiful white book with a shiny book jacket. Then I got batter splatters in the Quick Bread Section. There was a vanilla stain on the 1-2-3-4 Yellow Cake page. The book jacket was so frayed it looked like a miniature schnauzer had tried to play tug of war with it. A few years later, we gave up on the torn book jacket. My guess is it’s probably buried at the bottom of a very deep and neglected magazine basket full of outdated Food & Wine’s. The book, however, still sits on the kitchen bay window at home. It’s more stained than ever. 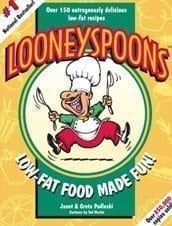 I bought this cookbook with my allowance money at an elementary school book sale. If Joy of Cooking was the sophisticated compendium of all things culinary in my eyes, i.e. National Geographic, or…The History Channel before it became all SWAMP PEOPLE! and PAWN STARS!!!!!!, then this cookbook was Nickelodeon and Cartoon Network.

Every couple months or so, each class at my school would line up at a different time of day to march down to the library and peruse the selection put out by our librarians and the corporate pooh-bah’s at Scholastic Books. We were told to bring some spending money if we were interested in purchasing books (which now seems to me an exclusionary exercise in “how big is your allowance?” Blegh. Hindsight is 20/20.). I showed up that day with my entire collected allowance money in my pocket (at three dollars/week with the very occasional stop at the ice cream truck for a Chipwich, I was at somewhere around $18). A big saver, nine-year-old me. Though I hadn’t realized at that point how unwise it was to carry around one’s entire life savings in the back pocket of one’s jeans. There’s a particularly tragic story involving $82, a mall fountain, and a Mrs. Field’s cookie that I’d rather not discuss.

Amidst all the Sweet Valley High’s and Boxcar Children’s (ok, let’s be real. The Boxcar Children, Book 1 is a literary triumph.). I saw this crazy, bright orange book with a manic cartoon Italian chef on the cover, and my immediate reaction was: WANT. Always the frugal spender, though, I carried it around with me as I inspected the other offerings, pausing to flip through it every so often and weigh the pros and cons of a possible purchase. I probably put it back once or twice, but when it came time to go back to class, I dropped all pretenses and bought it. It cost seventeen dollars, and was probably the largest purchase I’d ever made.

Today, they’re selling these Used on Amazon for a whopping $0.01. Seriously. Go out and find a penny on the sidewalk to buy this book. Cindy Brady’s “Thizzlin Thaltha?” “Meatless in Seattle?” “If You Bake it, They Will Come?” The nine-year-old me was enthralled, and the 23-year-old me is still enthralled.

It wasn’t until I was older that I fully realized the recipes were supposed to be healthy/low-calorie, but that just seems like a bonus at this point. 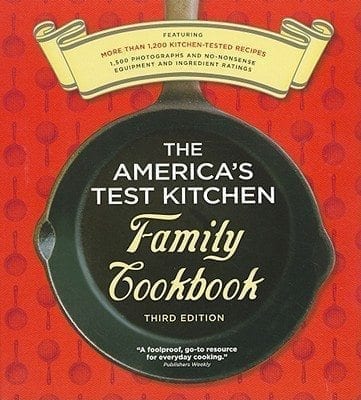 We got this book for Christmas from our aunt. It didn’t seem like much at first. It was spiral-bound like my Math binder, with very simple pictures…eh.

But little by little, this giant tome won us all over with step-by-step photos (that show you what properly creamed butter/sugar is supposed to look like, the difference between soft and stiff peaks in a merengue or how to properly fillet fish), conversion tables (no more will I be confused by every annoying recipe out there calling for 1/3 cup butter. It’s a stick, people. Put it into terms we can all understand!), substitution charts (no cake flour? Just use all-purpose with some cornstarch. WIN.), and meat diagrams (what’s the difference between a pork butt and a pork shoulder? Answer: there IS no difference! What the whaaaa???).

This book is a kitchen workhorse. How many times have I tried to make some rand-o new roast chicken recipe, and my chicken is 5 pounds, but the one in the recipe is 4 pounds, and the cooking instructions are only for a dang 4-pound chicken!? What about all of us poor nincompoops out here with ginormous 5-pound chickens!?!??! ATK to the rescue, man.

And even though their television program looks like a 90s episode of Mr. Rogers (that guy with the bowtie and the red apron, right? Anybody?), I’ll take ‘em. Because by virtue of their nomenclature, all of their recipes really are tried and true by a team of test kitchen experts. And I love them.

4. The Bread Bible, by Unknown (i.e. Google has failed me): An Obsession Begins.

Does anyone else out there think that someone should be making a “warm bread” scented candle? I’m obsessed with the smell of bread. When I was a kid, I would get the wry, “we can’t take you anywhere,” from my parents when I’d immediately reach into the restaurant bread basket, break open a dinner roll, and snort it like some kind of deviant. (Pause….searching for “bread scented candle” on Amazon).

WAIT. THEY HAVE IT. Argh! Brilliant.

My obsession with bread—the smell, the crackle, the crumb, the crust, the chew—it all began with this book. It wasn’t really a handy practical guide to bread baking. It was a coffee table book at our house, and just sat in our living room along with a big photo book called Horses, and The Chocolate Bible (surprisingly enough, I couldn’t care less about The Chocolate Bible when I was younger. The allure of bread baking was too strong.).

I would wander into the usually otherwise unoccupied living room, with its stiff furniture and general air of “I am reserved for company ONLY,” just to flip through this book. It’s a book for the serious bread baker—a book that tells you about the wide world of yeast. A book that tells you how to make a starter dough. A book with artisanal recipes that I was incredibly intimidated by. But I was probably seven years old or something, so that’s understandable. I think the big Bread Bible that I knew as a kid is currently out of print, and it was sadly lost during a house move, but there have since been other Bread Bible’s published that I hope are just as good.

(…a new fantastic poooiiinnt of view…..)

This was probably the second most read book on that living room coffee table (after the one about bread. Doy.). I think my mom probably bought it not for the section on Chinese cooking, but the sections on all the other cuisines from around Asia: Thailand, Malaysia, India/Pakistan, Korea, etc. What was especially great about this book, in addition to the photos, was feeling like there was this whole world of Asian food out there that I had yet to try. Things like curry leaves, tamarind paste, and galangal—ingredients that I’d never heard of before. The book really simplifies things for first-timers, so it’s a good place to start before you delve deeper into these cuisines.

And it’s got noodles. Have I mentioned that I’m a sucker for noodles? If a dude approached me on the street and offered me a perfect bowl of beef noodle soup, I’d probably ignore the “don’t take candy from strangers” adage completely and unabashedly slurp them down in the middle of a crowded sidewalk. I wish that were an exaggeration.

Well, that’s it. Those are the big five cookbooks that I remember using and/or reading from when I was a wee lass—a scrappy suburban kid with a balloon whisk and a dream. But now we’d like to hear what the most influential cookbooks were for you! (So that we can add them to our cookbook library). Let us know in the comments below!