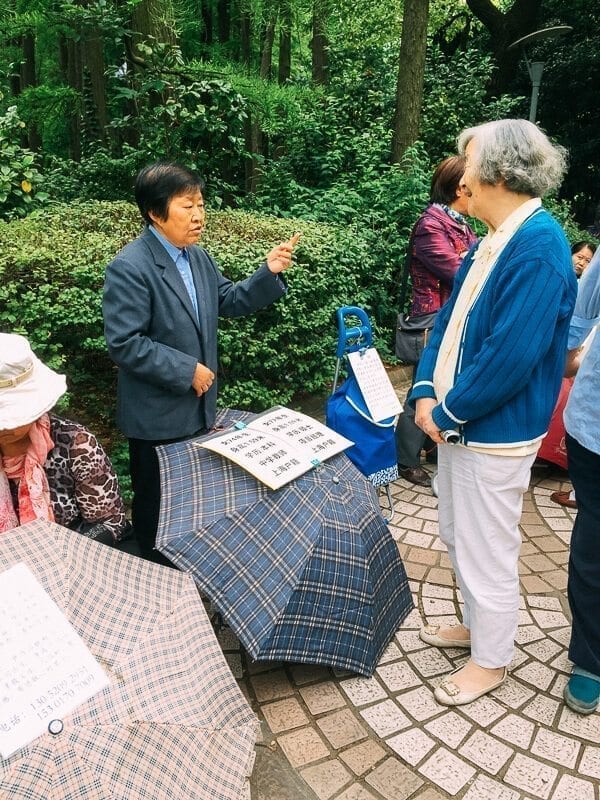 I can’t remember when and how I came to know about the Matchmaking Corner (上海人民公园相亲角) in Shanghai’s People’s Park.

This place came about ten years ago, when a few hobby matchmakers decided to meet, exchange photos, and set up dates for their acquaintances. Apparently their success rate was surprisingly high, and the word got around, so more and more people were bringing their kids’ information in hope of a good match–with or without said kid knowing, of course!

Ten years later, the Shanghai matchmaking corner has its own name, and it is THE main event at this park on the weekends. During our recent trip to Shanghai, Bill and I decided to pay a visit and see for ourselves. We figured it would be an interesting and unusual story to share with all of you; plus, I had a picture of Sarah and a picture of Kaitlin tucked into my wallet. 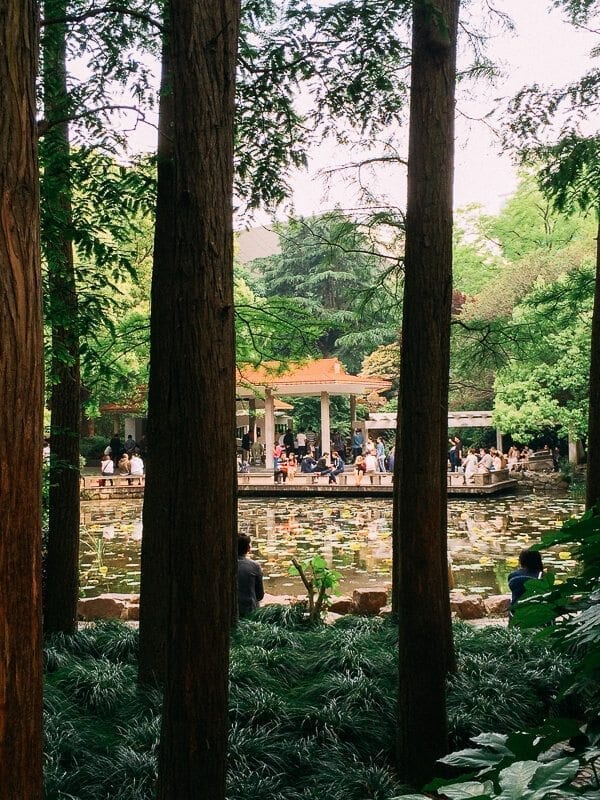 Finding the place is easy. It’s right outside Exit #11 of the People’s Square subway station (via subway Line 1, 2 & 8). The minute we stepped inside the park, we were surrounded by people, signs, and fanned out umbrellas lining the grounds along the pathways.

I have to say, it was a little jarring for someone seeing it for the first time. It reminded me of the old days (before China’s liberation) when some poor families would have to sell their child for money due to hunger and sickness, for survival. Obviously the situation today is utterly different, but still, it feels a bit odd to see all these parents matchmaking for their children in an almost flea-market-like setup. But many people enjoy the atmosphere––and the thrill of the hunt––and have been coming for years, greeting each other with a quick nod and a faint smile. 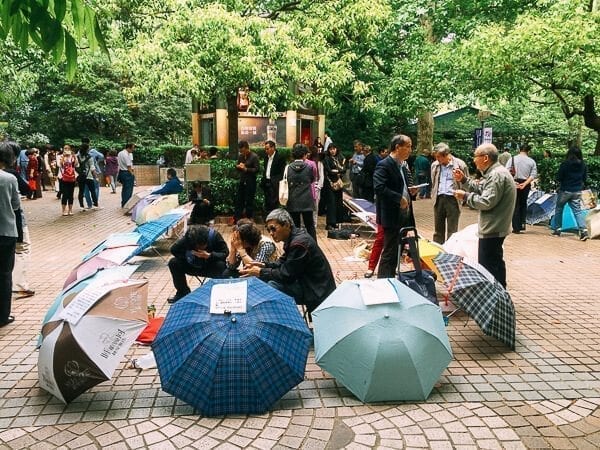 You can’t really tell from the photos, but the park “exhibit” is grouped by Shanghai natives, New Shanghainese (after 5 years of living and working in Shanghai, you are offered a residence permit, known as Hukou, 户口), people from all other provinces, and international “applicants” from countries like the US, Canada, Australia, Japan and Hong Kong. 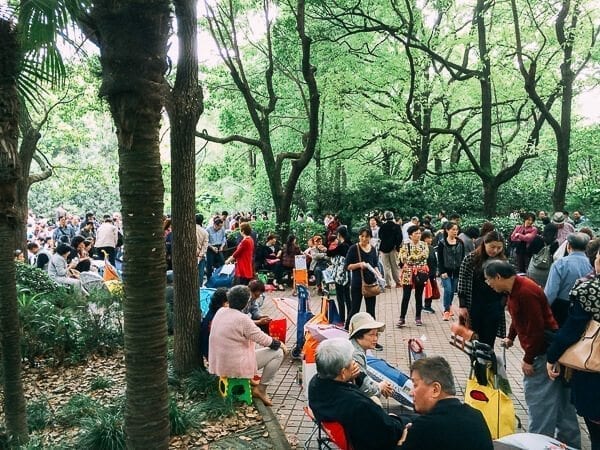 Apparently many smaller matchmaking events happen in other parks around Shanghai as well, but Renmin Park is THE destination to see and be seen. Even though the park has put out a sign which clearly states that the park is for everyone’s enjoyment and not a place for matchmaking, every weekend, hundreds of people–mothers, fathers, aunts, and uncles–come here with their portable stools, tri-fold umbrellas, and laminated signs and park themselves by the side of the path, hoping to beat the odds and find their future in-laws. 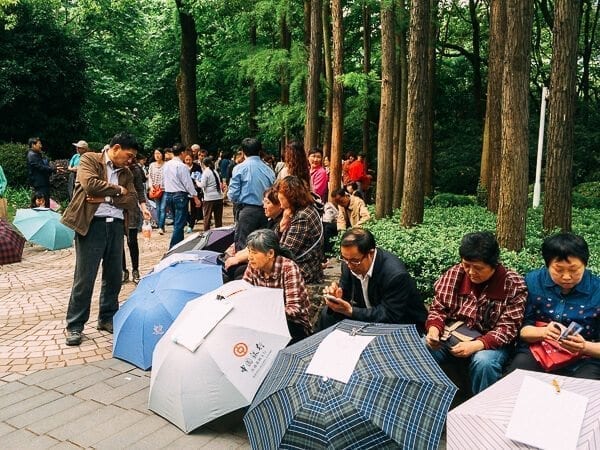 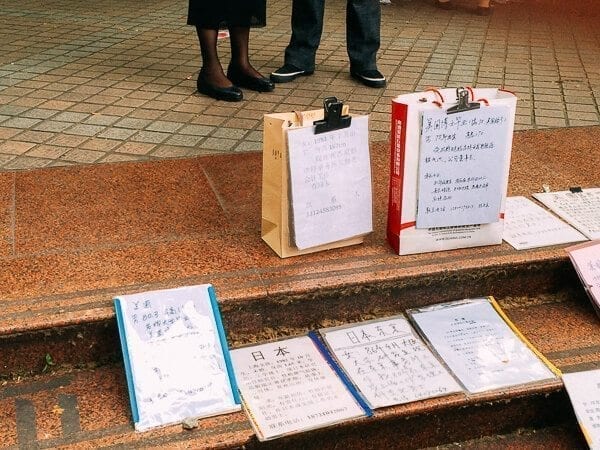 According to one mother who may be the fastest talker I’ve ever met (truly, she did most of the talking, as I couldn’t get two words in.), the success rate of matchmaking in recent years has dropped to 1%. But I liked her positive attitude: if you are that 1%, then your success rate is 100%! Not a bad motivator, I suppose, even if the reasoning is spotty. After listening to her shoot out words in rapid succession for a good thirty minutes, I got the lowdown from her perspective as an insider. Her take was that there’s too much focus on material things today. Here is how it breaks down: 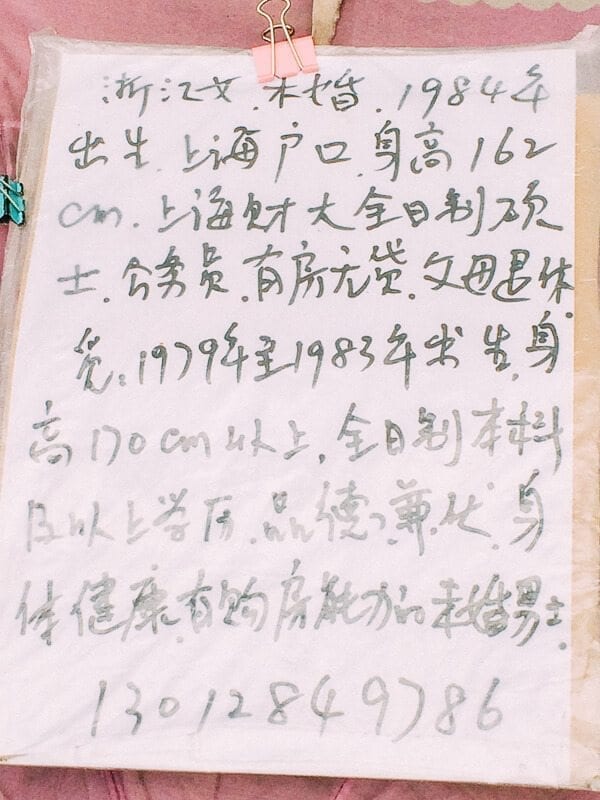 Other considerations include but are not limited to:

A typical marriage “resume” states: gender, age, height, weight, education, job, wage, and contact information. The ones who have housing and/or own a car will bold such information to indicate that they are top choices. But there is no mention of personality, hobbies, beliefs, likes, or dislikes.

The fast-talking lady that I was “speaking” with also voiced her distaste for most people’s desire for the material things only. I came to know that she was there for her thirty-year-old son. Her son is a manager at a real estate office in Shanghai, and he owns an apartment, but the apartment does have a mortgage (minus 10 points for that).

The funny thing is that she was unwilling to show me her son’s photo and only yielded after I told her that I have two daughters in his son’s age group. I was not lying, but I wasn’t necessarily telling the truth either, because after seeing this matchmaking circus, I definitely didn’t have any ambitions to be matchmaker for Sarah or Kaitlin (not that I really ever have, much to their liking). 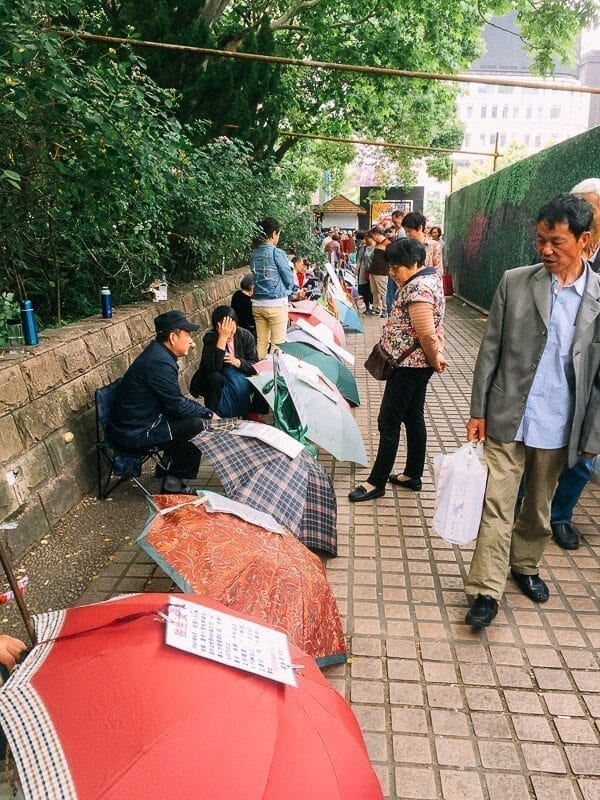 The fast-talking lady also shed some light on the issue of photos. Apparently what you see is not what you get, with the help of the smartphone these days, all photos are “PP’d”: a round face can be dragged into an oval face; imperfections are erased; brows are drawn; eyes are enlarged. Crazy! 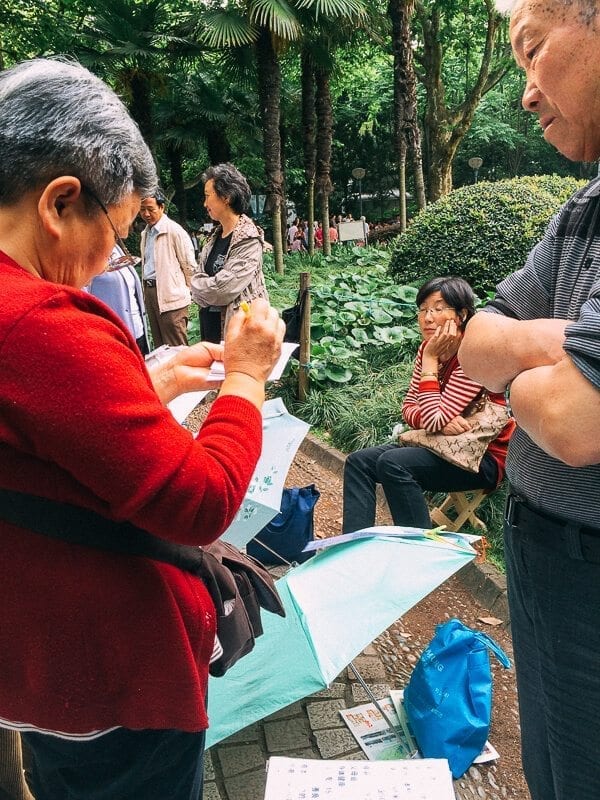 I also found out why the marriage “resumes” do not include photos, which seemed like a logical addition to me, and why, moreover, photographs were not even welcome. Believe it or not, most kids are totally unaware of their parents’ “visits” to People’s Park. Can you imagine if a picture of your crazed mother brandishing your photo in the park showed up in your social media circle?! I did my best to capture the scene and a couple of unguarded marriage “resumes” for story-telling purposes only–though, I can’t guarantee confidentiality here. 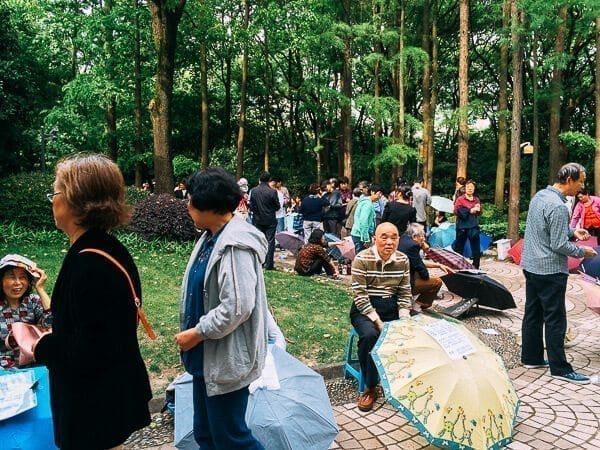 While all the visitors and exhibitors are parents, I did see a young guy in his early 30s posting a sign for himself. His sign stated that he’d recently relocated to Shanghai from the US with a US college education, and owns one house in LA and one house in Hawaii. He was tall, slender, and not bad looking, but he was not attracting much interest at all. Maybe his material wealth status was a bit too good to be true for the ever skeptical Chinese parents who’ve learned one too many lessons over the years. 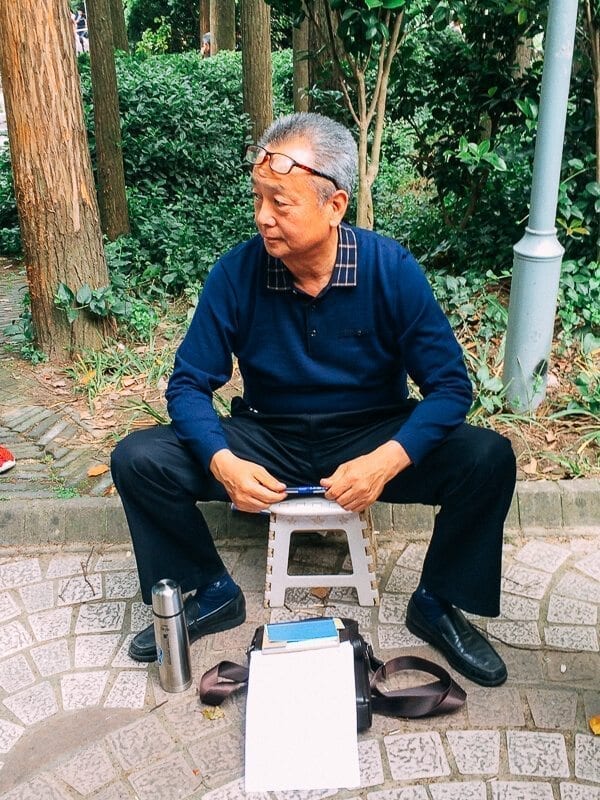 All in all, it was an eye-opening experience! And hey, if you’ve got a bachelor son or a single daughter, this last resort is always waiting in People’s Park! 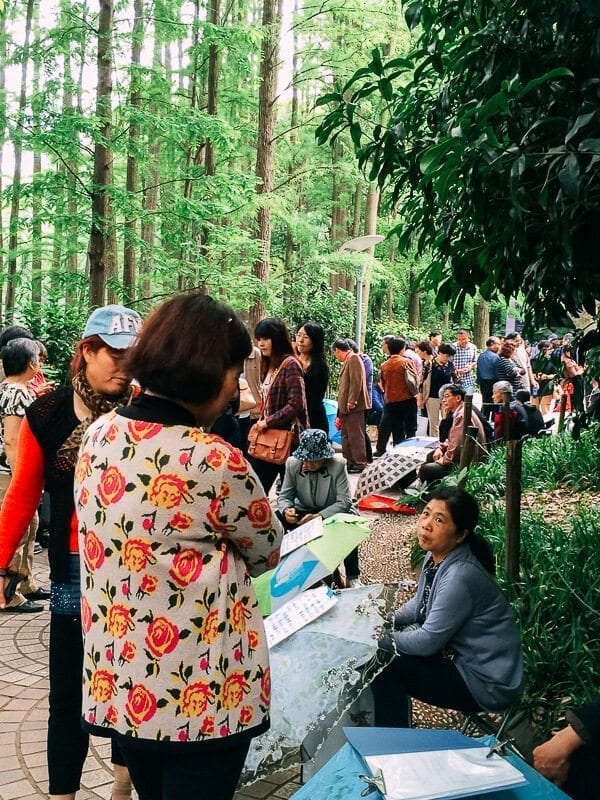 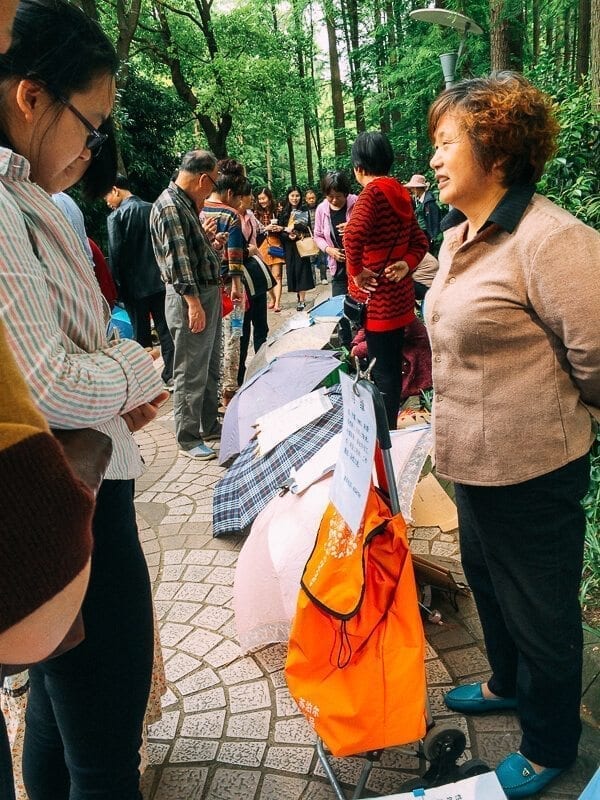