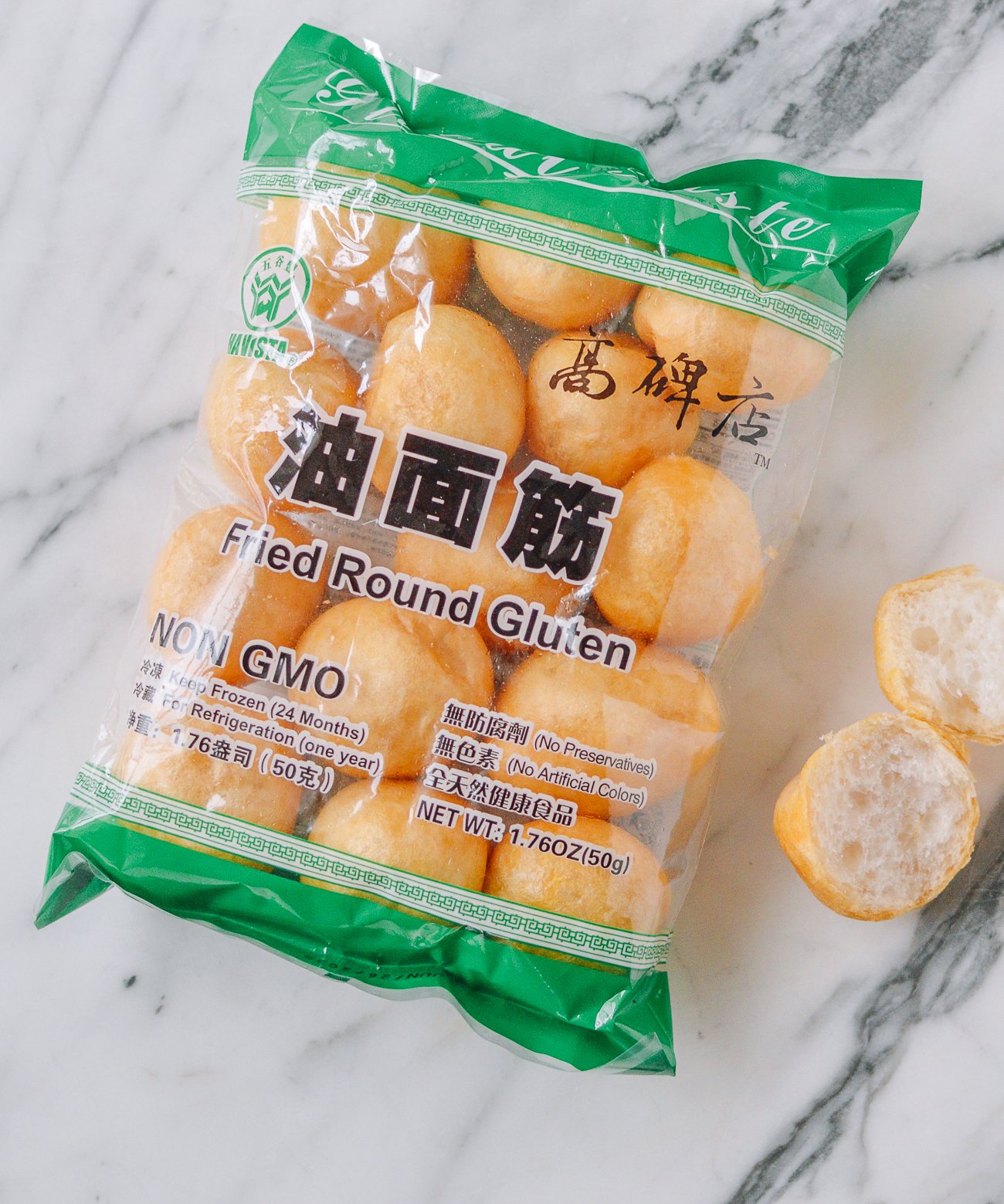 You may have heard of seitan as one of those new age vegan/vegetarian ingredients. However, it’s been around in Chinese and Buddhist cuisines for centuries. Known in Chinese as miànjīn (面筋), it believed to have been invented in ancient China as a meat substitute for Buddhist monks.

It’s also delicious! Like tofu, it comes in many forms and absorbs whatever flavors you add to it. In this article, we’ll talk about different Chinese wheat gluten-based ingredients, how to use them, and our favorite recipes for them.

Seitan, as it is most often called in the West, is the Japanese term for this ingredient. In Chinese, it is called miànjīn (面筋), which translates roughly to “flour tendon” or “dough tendon.” The Chinese word hints at its chewy texture!

While there are different types, there is a basic process for making it. Take wheat flour, and add water to form a dough.

Then add lots of water and “wash” the dough. This separates the starch from the gluten (protein) in the flour, leaving you with two separate products: starchy water and an elastic hunk of wheat gluten.

The gluten is then usually steamed or fried to cook it. The result is a chewy, spongy, high-protein food that is flexible and sturdy enough for many cooking applications. It can be stir-fried, braised, or otherwise prepared.

In this gluten-production process, the starchy water doesn’t go to waste! It can be made into steamed noodles known as liángpí (凉皮 – cold skin noodles). Or it can be strained and dried to make pure wheat starch, an ingredient used in certain dumpling and noodle recipes, like our Steamed Crystal Dumplings.

The process can be shortened significantly simply by mixing vital wheat gluten with water. Vital wheat gluten is basically the protein from wheat flour in powdered form. You may be familiar with it if you’ve used it to bake bread.

For those of you with gluten intolerance or Celiac’s, you may be wondering about a substitute for this ingredient—basically pure wheat gluten. A fried tofu puff is probably most similar in texture to steamed wheat gluten!

We’ve actually demonstrated this entire process in our recipe for Cold Skin Noodles & Gluten, which involves making both the gluten and the liangpi noodles by washing wheat dough in a stand mixer.

Most Chinese cooks don’t make their own gluten at home, instead opting to purchase it from the store. Here are some of the most common gluten-based ingredients you’ll find at the Chinese market:

One particularly spongy type of wheat gluten is known as kǎo fū (烤麸). You can purchase it fresh, frozen or dried.

This package of Kaofu below comes in cubes, but you may also find fresh kaofu sold in one large solid block.

If the kaofu is dried, it needs to be soaked before using.

You may also encounter fried gluten. These come in both light-as-air round balls, as well as more pliable fried “puffs,” both pictured below.

This is a more densely textured seitan, which has been chopped to almost resemble ground or shredded chicken.

How to Use It

This ingredient is very versatile! It is delicious stuffed, braised, stir-fried, steamed and tossed in a dressing, or even deep-fried.

When it comes to Kaofu, we use it in a very traditional Shanghainese cold appetizer known as 红烧烤麸 (Red Braised Kaofu). The gluten is lightly pan-fried and then braised with a meaty mixture of dried mushrooms, wood ears, peanuts, and lily flower.

An example of wheat gluten being simply steamed and tossed in a dressing with other ingredients is our Spicy Cold Skin Noodles recipe. This recipe combines both end products from the kaofu-making process: the noodles made from the starch, and the kaofu made from the protein/gluten.

A traditional recipe to make with fried gluten is stuffed gluten balls, which is a labor intensive special occasion dish!

A simpler recipe that’s also super delicious is our Stir-fried Pea Tips with Seitan Puffs, which is meat-free but satisfying enough to be a main dish with steamed rice.

As for the chopped seitan, it has a dense texture that makes it a great meat substitute in vegan versions of favorite dishes, like Vegan Pad Krapow and Vegan Adobo.

Because gluten products come in various forms, you may have to venture into different areas of the Chinese market, depending on which you’re looking for.

Find the dried kaofu near the dried bean threads and dried mushrooms. If you’re looking for fresh kaofu, look in the refrigerated section, usually near the fresh tofu products. You may also have to go to the freezer case to find it. Fried gluten is also usually in a refrigerated area. In our local grocery, it’s near the milk and eggs.

Store fresh or frozen gluten in the refrigerator or freezer, and store dried gluten in a cool, dark spot in your pantry.

Recipes That Use This Ingredient