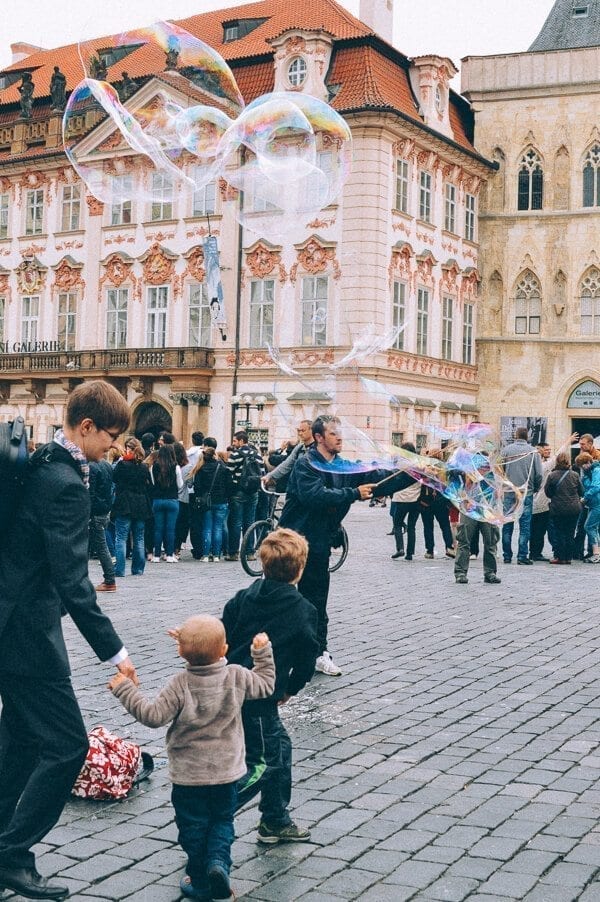 If you just stumbled on this post and aren’t sure what we’re doing in Prague, check out our first post in this travel series––a stop in Munich. You can also check out the later posts about the trip, including Athens/Santorini, Florence/Rome and Budapest.

Everything that I’m about to tell you really happened.

It’s almost laughable, how many things went wrong within the course of the 48 hours we were in Prague. Just two months after the events in question, this sorry chapter of our whirlwind European adventure has already taken a half-step into the realm of legend.

We’ve told these stories so many times now that they’ve taken on that I’m-going-to-tell-my-grandkids-about-this quality. Normally, when a story gets into rocking-chair, worthy-of-the-grandkids territory, it tends to get embellished over time in the name of good storytelling. The twelve-pound fish you caught becomes the monstrous forty pounder that nearly tore your arm off. The canoe that nearly tipped over after you dropped an oar in the water actually did tip over and you had to swim two miles back to shore.

Well, there’ll be no need for exaggeratin’ here. I’m going to tell you about Prague exactly as we experienced it. There was a lot of good (walking through St. Vitus Cathedral, seeing Beethoven’s handwritten annotations on his 4th and 5th Symphonies in Lobkowicz Palace, finding surprisingly good Chinese food in our search for a green vegetable in a sea of starch and brown gravy), and the bad was…pretty bad. But we’ll get to that. 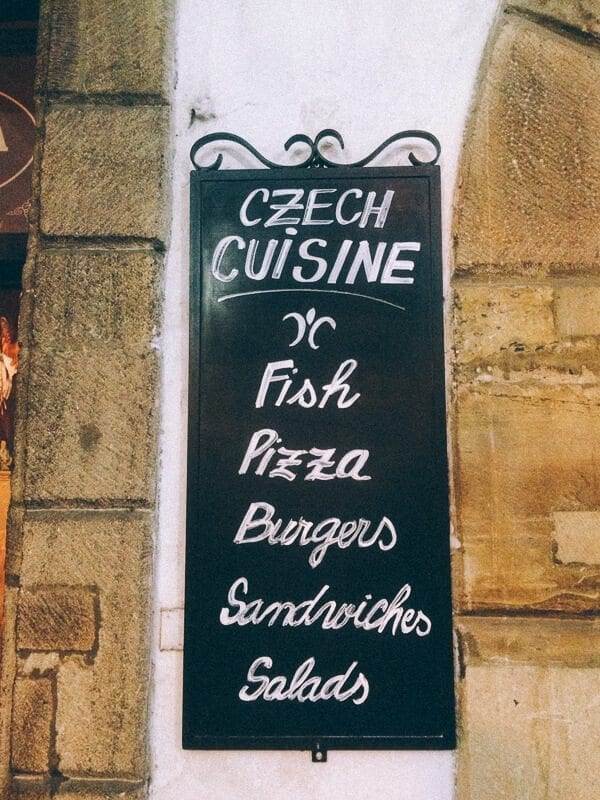 After our leisurely layover day traipsing through the streets of Munich, we hopped on an evening plane for Prague. After what couldn’t have been longer than a 20 minute flight, we were charging through the Václav Havel airport trying to find the right bus to the Airbnb we’d commissioned for the next two days.

As it turned out, a busted boiler had flooded our night’s accommodations. Our Airbnb host did some quick work of finding another apartment for us to stay in. After a bus ride and a couple subway transfers, we arrived in what looked like the outskirts of the city. There was barely a fellow human in sight, save a few locals having late-night dinners in a couple dingy restaurants outside the subway station.

After a lot of confused wandering through dark streets, looking for the right building number, we arrived at the building in question. We knocked on a front window, and an equally confused-looking guy pulled back the curtains. “Uh…we’re the Airbnb people?” was all I said.

Long story short, the beautiful, airy (and cheap) two bedroom apartment we’d originally planned for gave way to a single bedroom, an awkward shower, and a white pleather sofa bed. But our spirits were still high. We had wifi, the crispy ham we got in Munich, and a loaf of bread. More than enough to make us happy. That night, the three of us––my sister, cousin, and I––all squeezed onto the bed and went to sleep, looking forward to the next day.

Day 2. Things started out innocently enough. We took a lovely stroll through Old Town Square, and wandered into random churches. 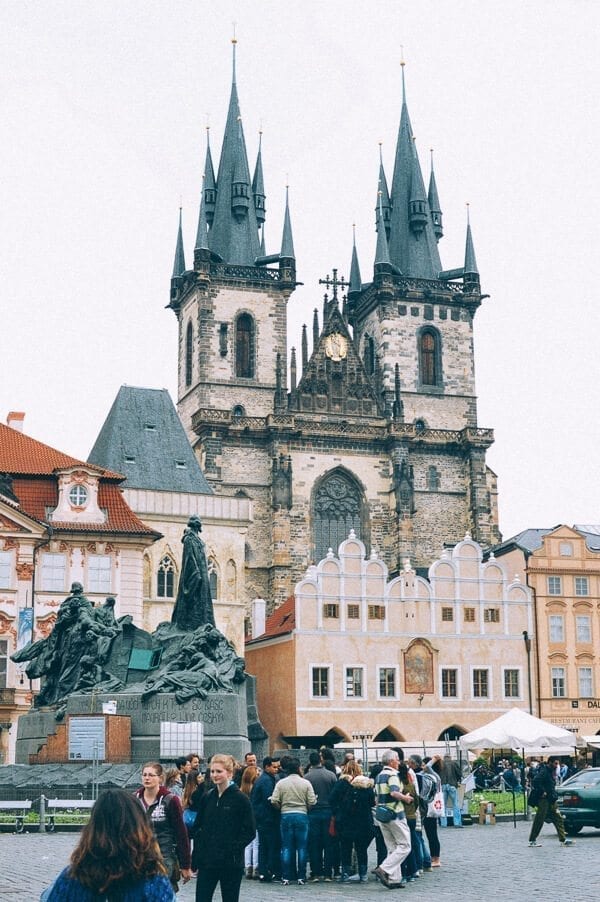 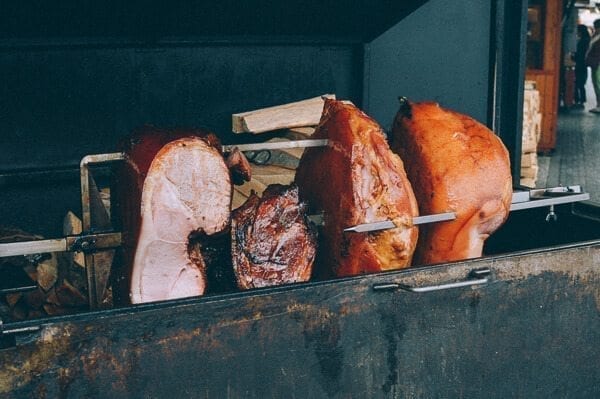 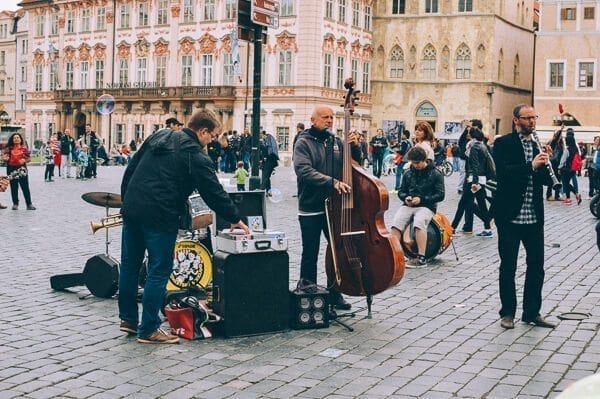 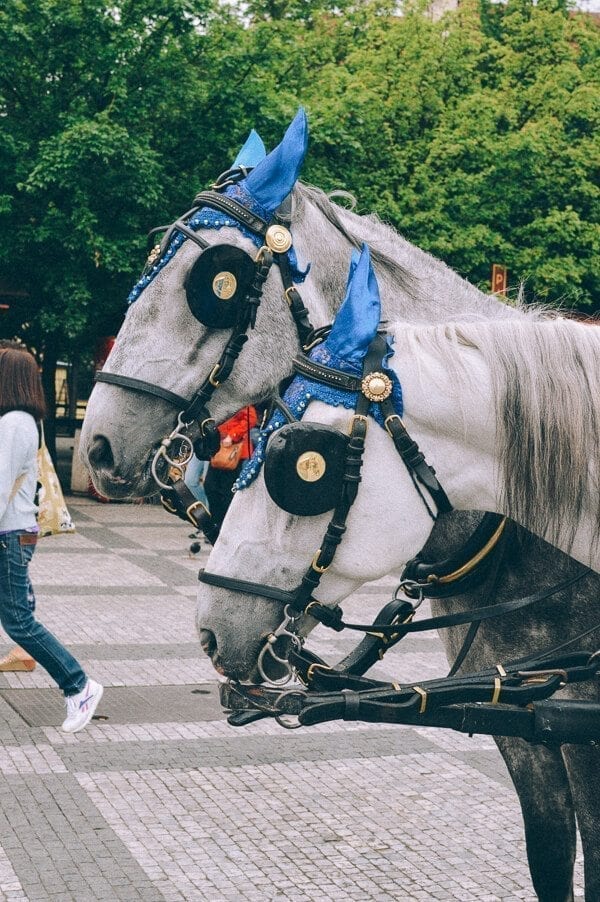 And then…we decided to cross the Charles Bridge to walk up to Prague Castle. Which is when the bad stuff started happening. My sister was promptly pick-pocketed, and we ran into a hostel, piggy backing on their wifi to call home and get our parents to freeze her accounts. An experience, I suppose, that no post-grad Euro-trip does without.

No love from the saints lining the bridge. 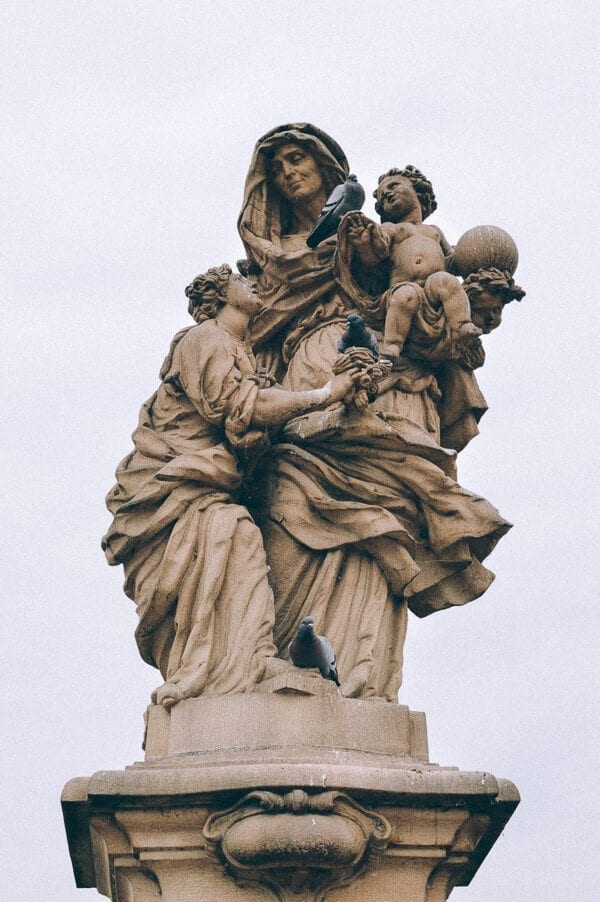 Or from Charles IV. The smug bastard. 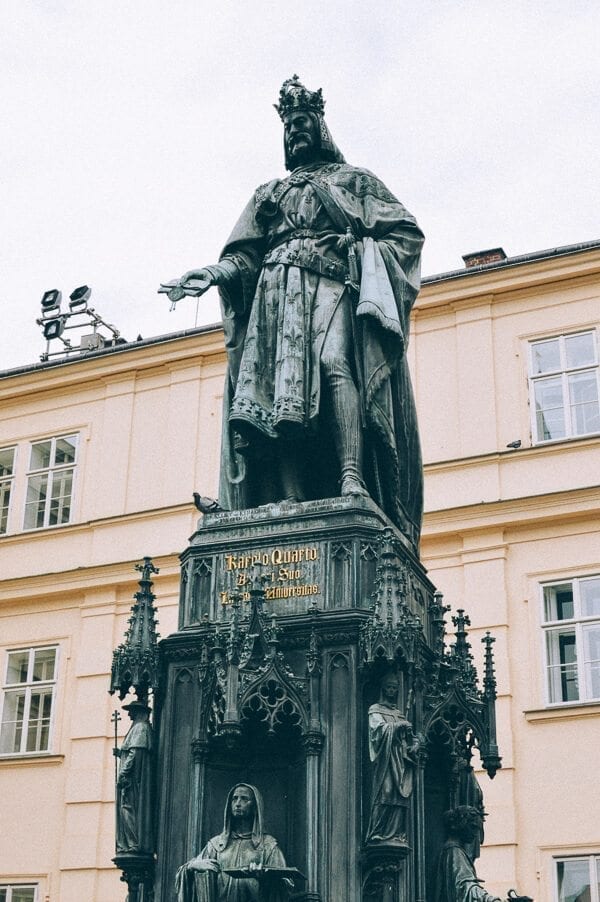 Shaking off this latest misfortune, we trudged up the hilly streets toward Prague Castle. The castle was great, and St. Vitus Cathedral had some of the most impressive stained glass we’d ever seen. 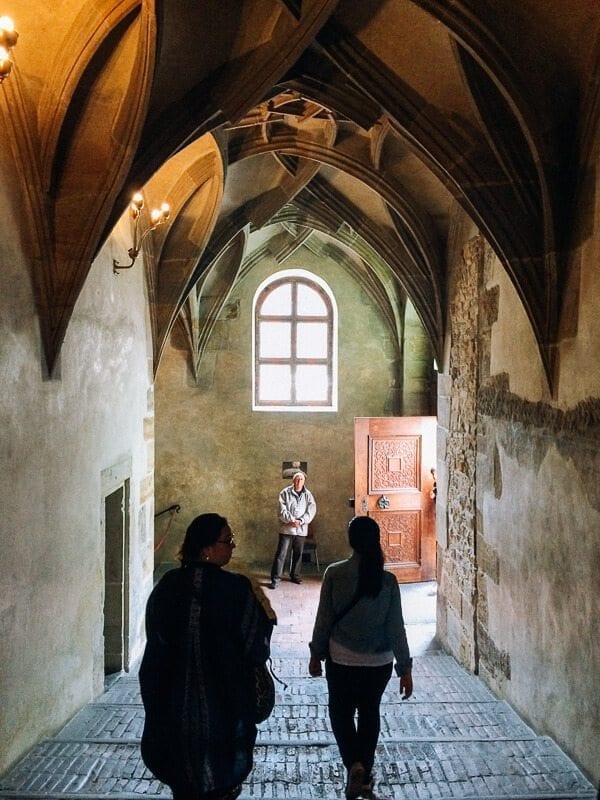 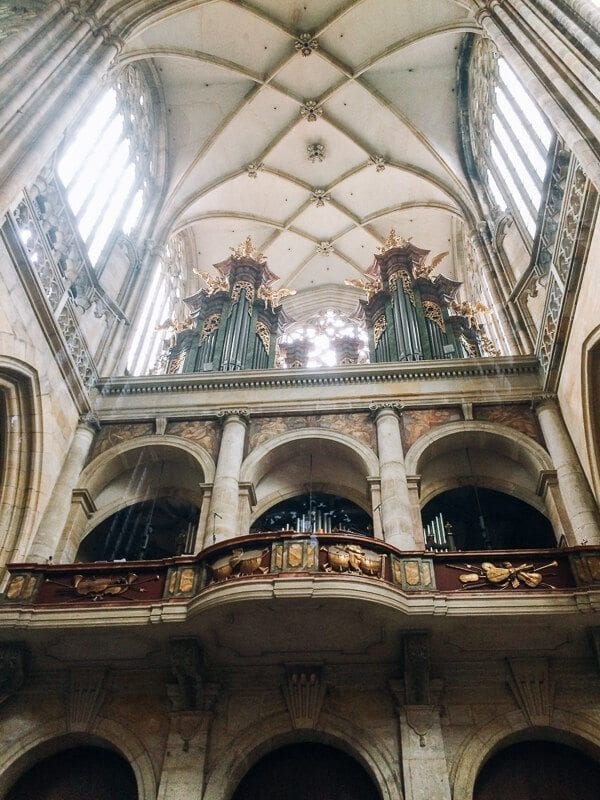 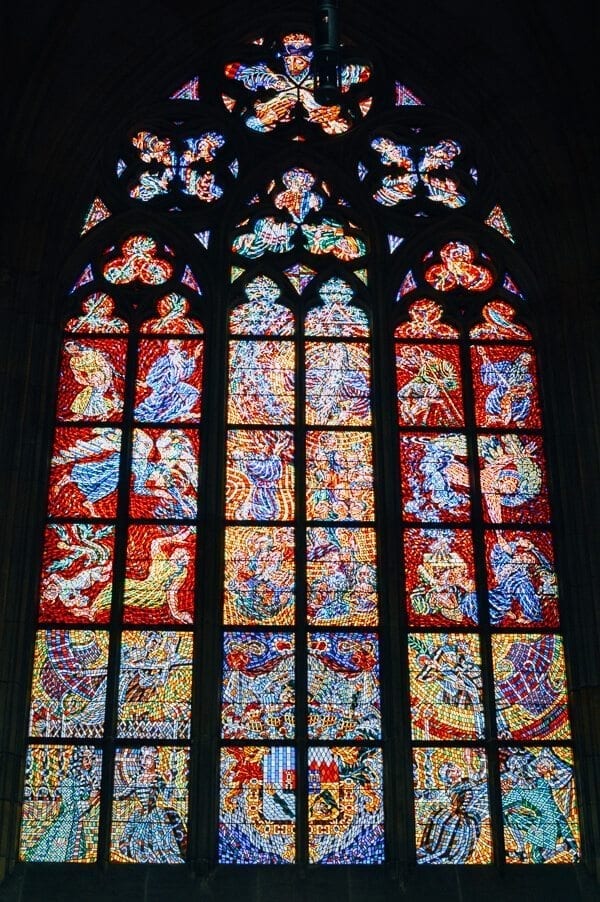 After that, however, we decided to find a police station to report the robbery and generally be good law-abiding citizens. The practiced, uninterested manner with which the police officer handed over the English-language police report form told us that it definitely wasn’t his first time at this particular rodeo. 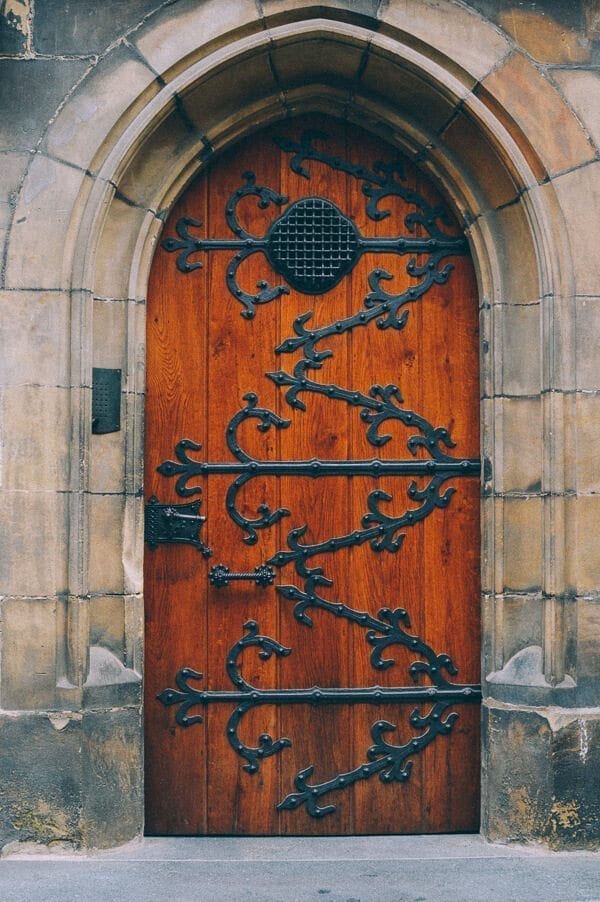 Day 3. When the proverbial shiitake mushrooms (this being a family site, after all) hit the fan. So, backstory. When we first arrived in Prague, and I took out money, I decided to take out 2000 CZK, or about $80. The lovely ATM spit out this massive 2000 CZK note, and it was like Monopoly money in my pocket. Everyone refused to break it. I had to use a credit card for most purchases, including subway tickets.

So we find ourselves in one subway station on the morning of the third day of our trip. This particular station doesn’t have a machine that takes cards––only cash, in the form of coins. Which I––the Monopoly banker with 2 large in her pocket––don’t have. We go to the kiosk, hoping to find an attendant to buy tickets from. Deserted. The convenience store? No one will break a 2000 CZK note even if I buy 10 candy bars. We decide that we’re going to get on the train, get off at the next stop, and buy tickets there. Hopefully there will be a machine that takes credit cards, we hope (in what turned out to be the most misguided decision of the entire trip).

You see, the Prague metro system involves getting a ticket and validating it to get in, but there isn’t anything blocking you from just walking on through. Thus far, we hadn’t seen anyone checking for tickets. Some locals just walked straight ahead, without a glance toward the ticket machines. We’ll be fine for one stop, we thought. Right?

At the next stop, we were stopped by a burly Czech dude in a blue uniform. “TICKETS?” he shouted. Oh boy.

To their credit, a bunch of old ladies and a local Czech guy went to bat for us, asking to see the goon’s badge. The whole experience came to a fever pitch with my sister practically tackling the guy, snatching the passports from his grubby grip, turning to me, and shouting, “Sarah! RUN!”

At which point, I ran. It was a serious Taken moment. One half expected Liam Neeson to come barreling down the tunnel any minute brandishing a revolver.

We didn’t get away. The guy eventually caught us, and forced us to pay a $100 fine. We don’t suggest that you tackle security guards in Prague. I’m pretty sure we were lucky we didn’t go to jail. My advice is, if you find yourself in Prague, get coins for the subway AT ALL COSTS.

So…to recap. Prague = busted boiler/flooded apartment, white pleather sofa bed, pickpocket on the Charles Bridge, an evening filling out forms at the police station, and nearly getting our identity stolen/led to a jail cell in the underground metro system.

All told, Prague will go down in the books as one of the craziest stays in a foreign country I’ve ever had. 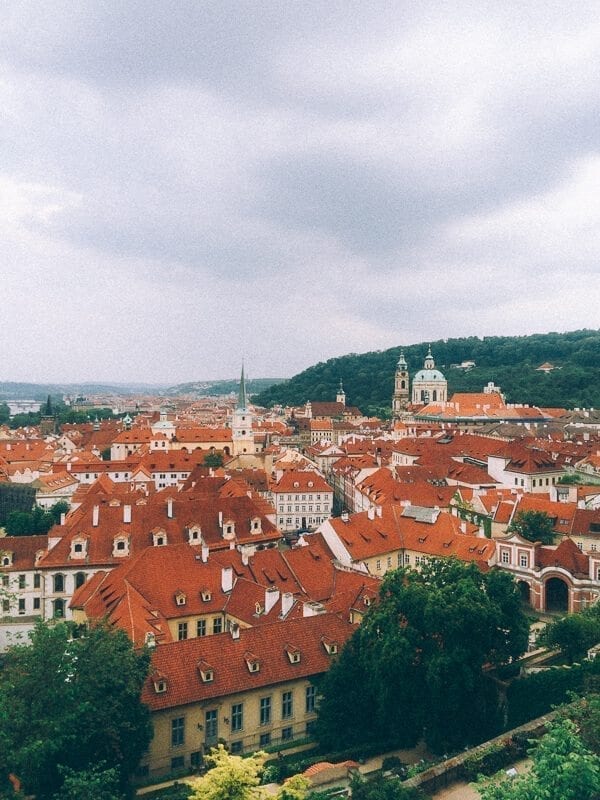 Next stop, Greece, where things were a bit more relaxed. Thank God. 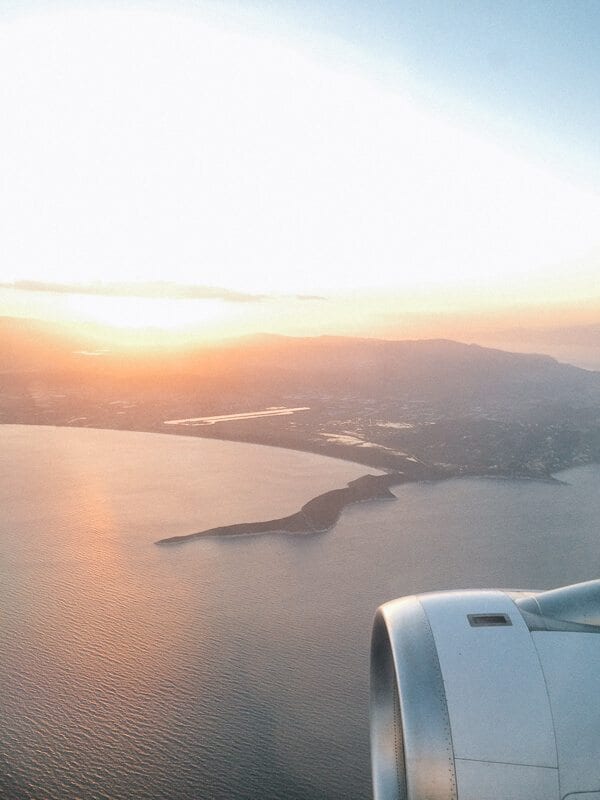