How to Make Wontons: Full Guide 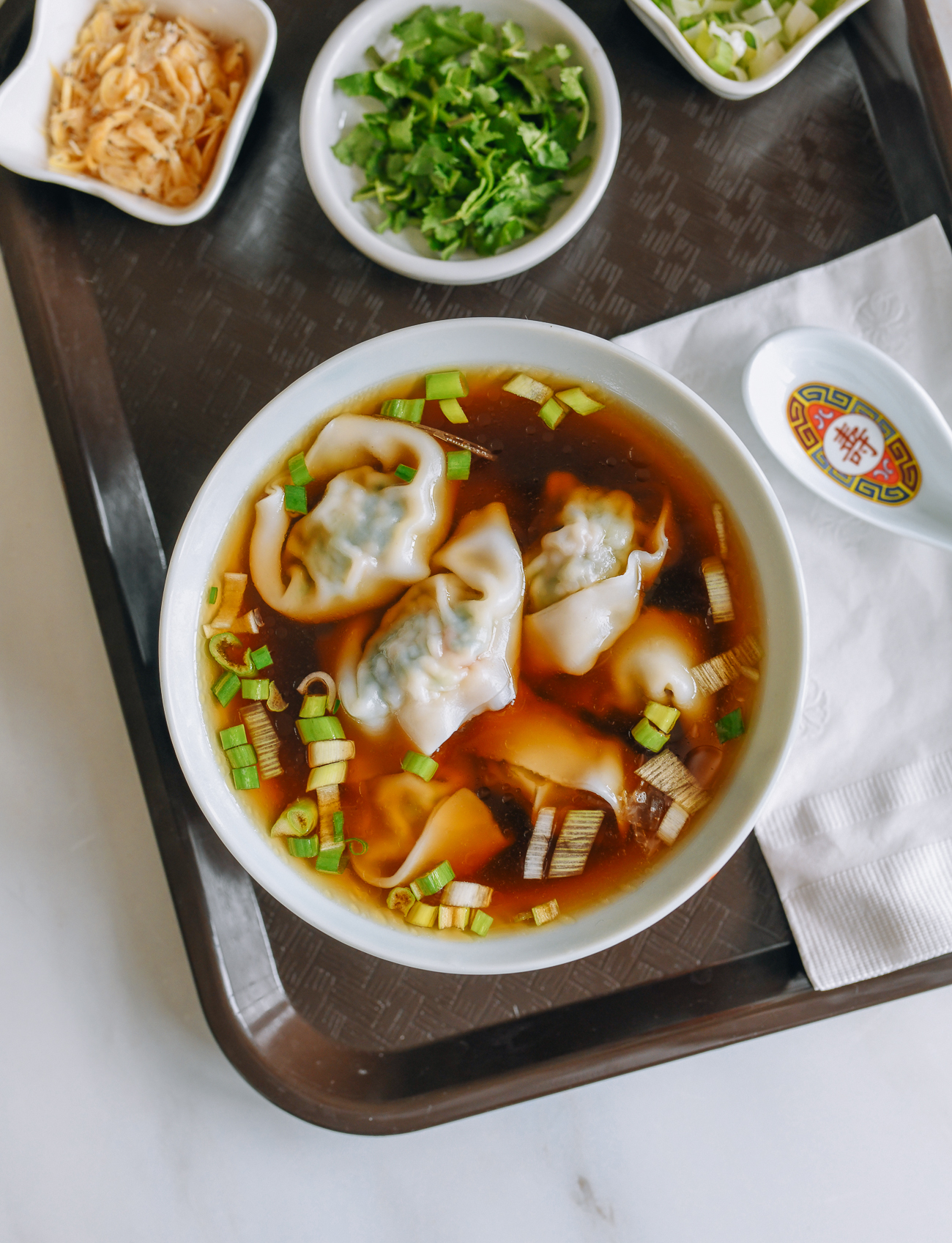 This is our complete guide on how to make wontons, where we’ve gathered all of our wonton recipe and supporting articles in one place!

If you’re new to making wontons at home, we have tips on what makes a great bowl of wontons, different fillings to choose from, soup bases, and several folding techniques.

Let’s talk about How to Make wontons

We almost always have a giant bag of wontons in our freezer. Before we get down to the final handful, we’re usually thinking about making another batch, because they’re such a quick and easy meal.

All our lives, they’ve been at the ready for after school snacks, easy dinners, harried workday lunches, hearty breakfasts, or last-minute dinners.

Prepping a big batch of wontons is a good project for a rainy day or weekend (ideally when you have a spare set of hands and someone to chit chat with). The hardest part may be figuring out what kind to make.

Your average wonton recipe has a pretty simple unifying characteristic in China: pork. It’s not a recipe that you see interpreted or veg-ified as much as dumplings, say, and I can’t say I’ve seen much beef or chicken wontons.

That’s because wontons are a largely southern Chinese food, so when you go to the provinces of Northern and Western China, you’ll more easily find bao and dumplings filled the pork, beef, or lamb, but few wontons.

How to pronounce “WONTONS”

Bear with me (or scroll past this) as I wander down a little topic that sometimes gives me personal agita as a Chinese American who wants to hear things pronounced properly, and sometimes personal anxiety as a bad Chinese kid who never quite took to my mother tongue…

What is the Chinese pronunciation of “wonton”? (Not, “wanton” which is an adj. meaning (of a cruel or violent action) deliberate and unprovoked. Lol.)

I’m not saying all English speakers should change how they’re pronouncing “wonton” because there are bigger fish to fry out there. But for the sake of knowing the lay of the land, let’s consider:

Phonetically, it’s a little like hwun twun, where the -un is somewhere between the winn in “Winnebago” and won as in “you’ve won a lifetime supply of toilet paper!” and the tw- is just shy of turning into a d- sound, depending on your regional Chinese accent.

Cantonese pronunciation: 餛飩 (Chinese, traditional) “one ton” as in “one ton of rice.” (You can listen to Daddy Lau of Made with Lau pronounce it at the 00:05 mark.) I can’t parse the finer points of the different Cantonese romanization systems, so I just wrote it out phonetically with American English as the touchstone.

The t- is preserved like in the word taffy. But finish the syllables more lightly—without the lingering on the -n‘s too long.

Lol okay, so it’s worth mentioning that the American pronunciation puts a bit of a drawl into the word.

It’s an exaggeration of the Cantonese pronunciation—no surprise given the history of early Cantonese immigrants in 19th century America. By comparison, it bears little resemblance to the Mandarin pronunciation.

Consider this all food for thought. You can still shout WOOOOON TOOOOON in the Western pronunciation, and we won’t hold it against you!

There are funny quirks when it comes to language where it may not be the “proper” pronunciation, but it is widely understood, accepted…and therefore correct-ish???

Like the word mischievous should technically be pronounced, “MIS-chuh-vus,” but you don’t really think twice when someone says, ““mis-CHEE-vee-us.”

It also depends on your audience. Like when I talk to my grandma. Her English is fair, but there are certain words where if I say them “correctly” in English, it just doesn’t make it through.

For example, if I say, “I can’t change your Apple ID. Otherwise, you’ll have 6 email accounts now,” the word “otherwise” is like a speed bump hit at too high of a speed. She’ll look at me blankly.

But if I say “anuzzawise,” imitating her Brooklyn-Chinese-accented English, the conversation keeps rolling like buttah.

What makes a good wonton?

The important thing to remember when making wontons is that you don’t overfill them. They’re not supposed to be big vessels of meat, rather delicate little parcels where you get a balanced bite of the chewy tender skin and filling.

This is super important for recipes like Shanghai Wonton Soup where it’s traditional to serve many wontons in one serving rather than just a few giant ones.

Once you’ve nailed the filling ratio, you’ll want to think about folding techniques and the soup.

There are broadly two categories of wonton wrappers: white wontons and Hong Kong style yellow wonton wrappers, which are made with egg (though today you may simply find yellow food dye as an ingredient). Of the white variety, there are thicker versions and thinner “Shanghai-style” wonton wrappers.

Store bought is ideal for ease and convenience. Wonton wrappers are fairly mainstream these days. We’ve even seen them stocked in non Asian grocery stores.

But in case you can’t find them near you, we have a recipe for how to make wonton wrappers!

We were surprised by how easy they are to make, and by how good they are compared to the store-bought ones we typically rely on. We’ll still use pre-made wrappers for ease, but this is a great recipe to have on hand for those who can’t access them.

How to fold wontons – 3 ways

Next to the filling, folding the wontons is what people imagine to be the most difficult and fiddly part.

But there are 3 different ways to fold them (even more, really). Find the one that feels most satisfying to you and run with it!

And yes, there is a really simple scrunch method where you basically just pinch it closed between your fingertips and this is entirely acceptable and not at all a cop-out!

Regardless of how much time you have and your preferred proteins, we’ve got a stock recipe for you.

A pork and chicken stock will be particularly delicious and satisfying, but there’s really no wrong way to approach your stock. Out of the box is fine too! Just find a brand that you really enjoy.

If we’re being totally honest though, our Shortcut Wonton Soup Base is probably the one we use the most, not because it’s plant-based (but it is, so long as you use the bare minimum of what we call for), but because all you really need is a drizzle of soy sauce, sesame oil, a sprinkle of white pepper, a pinch of sugar, chopped scallions, and boiling water. Voila!

Then again, who says you can’t add a few wontons to any of your favorite Chinese soups to make the meal feel complete? :)

What to do with leftover wrappers

With leftover wonton wrappers, you can freeze them in a freezer bag with the air pressed out of it. Then thaw them when you’re ready to make another batch.

Or you can slice them and fry them into Chinese Crispy Noodles with Duck Sauce! This is an incredibly addictive snack that adds a festive and retro flair to a Chinese meal.

Note: we haven’t yet tried it, but I would bet that if you brushed the wontons with oil on both sides and then cut them, they’d puff up similarly in an air fryer! If anyone tries this, please report back in the comments!

This is the wonton recipe we turn to the most. It’s the one my mom basically makes by heart—almost never measuring. She usually uses whatever green vegetable suits her fancy, whether that be shepherd’s purse, bok choy, or even garlic chives. It’s a simple blueprint that’s next to impossible not to like.

In Shanghai and surrounding areas, these are called xiǎo húntún (small wontons) because they’re particularly small. The wrappers are super thin—silky and light as a cloud. They cook in seconds, which makes it particularly important that they each just have a small morsel of meat. The resulting bowl of wontons is surprisingly light and satisfying.

The rough translation of these is “triple delight wontons,” for obvious reasons. These are the luxury of the wonton world—they’re more expensive at restaurants than your typical pork wonton and the addition of shrimp gives the filling a pleasant snappy texture.

The key to successful results is hand chopping the filling. Trust us when we say that it makes a huuuuge difference in the taste and texture. Otherwise the filling risks having a mushy texture. My mom has plenty of tips for getting it right.

We wanted to create a non-pork wonton recipe for those who prefer to eat chicken or don’t include pork in their diet. It’s a tasty combination of chicken, napa cabbage, and mushrooms that we made with our grandma!

Cantonese wontons often combine pork and shrimp into a miracle of cooking times—the pork is cooked through while the shrimp is perfectly cooked, nestled inside the wonton wrapper.

It’s incredibly savory and a signature Cantonese dish, made even more decadent by the addition of chewy Hong Kong wonton noodles. It can be easy to confuse them with Hong Kong style pan-fried noodles, so be careful when you’re shopping for your ingredients!

Sweet, savory, garlicky, and not as spicy as they look, Sichuan spicy wontons just make people excited when they show up on the table. Add as much or as little chili oil as you can stand!

These are an oldie. We’d make it for parties with friends and family—where it’s always fun to have a little fried something to pop into your mouth while you catch up.

You make some straightforward pork wontons and then deep fry them. Depending on the wontons you have on hand, you could also try frying some of the other recipes above, though in our opinion, those are best enjoyed in soup. There are three different dipping sauces too—a sweet apricot dipping sauce, a honey sriracha dipping sauce, and a sweet soy dipping sauce—something for everyone.

A classic American wahhn tahhn—sometimes with crab as a crab rangoon, but honestly it seems they’re just as beloved without!

Remember that era of recipes back in the 2010s where it was all fever-dream-fueled mashup recipes like “fettucine alfredo LASAGNA” and “Insert any dish here—but make it taco!”? This—I’m mildly embarrassed to say—was one of those recipes.

As you might be able to tell, my mom is really the wonton queen, and I’ve learned to stay in my lane—or at least, not do too much strange experimenting in the realm of wontons.

While you can pick and choose what works for you in the above wonton recipes, you can also do some experimenting of your own.

In our san xian wonton recipe, my mom even notes that you can replace pork with the same quantity of finely minced fish filets!

You can also choose from our different bao (bun) and dumpling fillings. For those looking for vegetable options, you can turn to our veggie dumpling recipes.

These fillings aren’t as well-suited to wontons as our actual wonton filling recipes, but if you’re looking for something vegetarian or something different, they’re a great place to start!

Hope you enjoyed this guide on how to make wontons at home. Let us know in the comments below if you have any other questions or thoughts to share!