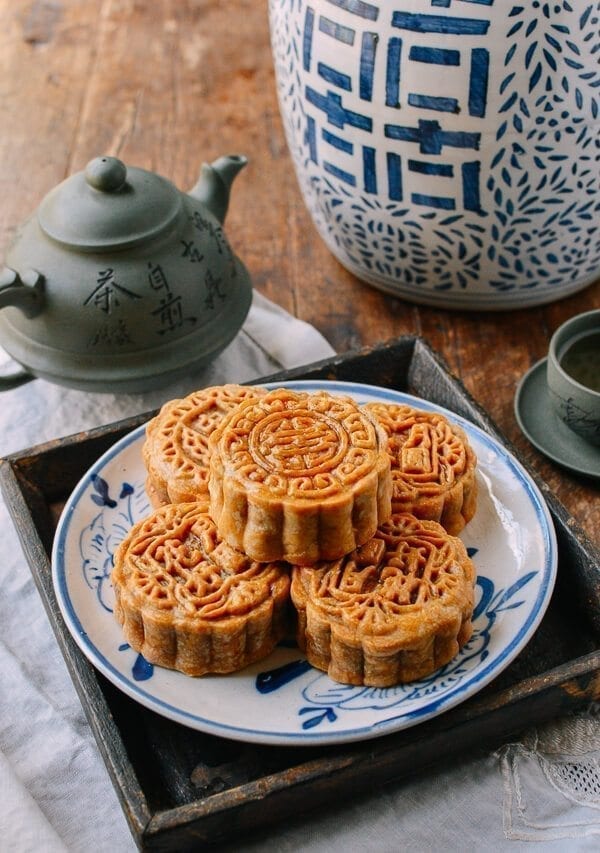 The Mid-Autumn Festival can get lost in the American mainstream, but it’s an important Chinese holiday, and one that my family celebrated every year when I was growing up in China.

We would make a special purchase of mooncakes—one for each person in the family, a big splurge! We’d eat them while sitting outside looking at the moon, admiring the night sky as we munched.

In the past few years, much of my focus has been on the mooncake—I’ve published one every year! Kaitlin asked me if we bought our mooncakes or made them from scratch back in the day.

Don’t let her grandmother / my mother fool you with her delicious Chicken Wontons—she could barely cook rice back in those days, let alone produce an edible mooncake!

Every day, rice was cooked in a big wok over flames stoked by thick sticks and twigs, and she just couldn’t get that flame right…the rice on the bottom would be burned, and the rice on the top would be slightly crunchy. It was a difficult task. We were all saved the day we got a rice cooker!

My family didn’t know much about the holiday’s traditions, so now I find it interesting to do a little research and share them with Sarah and Kaitlin. After some research, the findings are a bit unexpected!

Rather than the well known suspects of chicken, pork, or fish dishes, most traditional Mid-Autumn festival foods are associated with the local harvest. It’s a bit like Thanksgiving in that sense!

In true Chinese form, foods are picked for their associations with certain words and phrases and often vary by province due to pronunciation differences in local dialects.

For example, “pomelo” in Chinese is 柚子 (yòuzi). It also sounds like 佑子 (yòuzi), which means “bless and protect the children/descendants.” If you’re a wordplay geek, read on, because there’s more!

Keep in mind that every region’s traditions vary. Just like no one Chinese New Year meal is the same or the de facto official menu, no Mid-Autumn Festival traditions explore the same tastes. Think of this as a loose guideline!

Mooncakes are probably the most famous of all Mid-Autumn Festival foods. They symbolize the moon and family unity. The mid-autumn moon is full, and families with mooncakes in hand are harmonious, happy, and healthy.

Freshly made mooncakes will beat the store bought ones in any contest. Something fresh from your kitchen will taste so much better than a plastic-wrapped mooncake that’s been sitting around for weeks or even months. 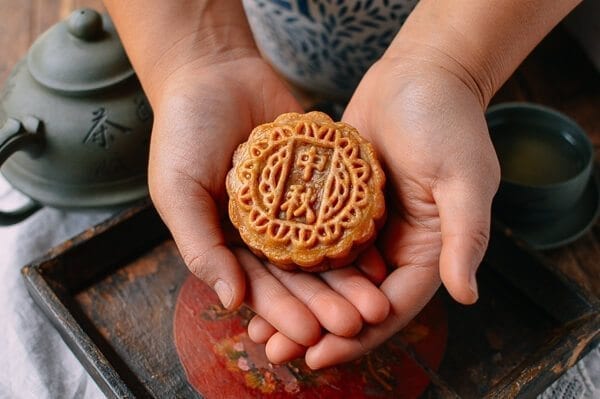 Not to mention, paying $10 USD per mooncake (just one, not a box!) is just too crazy! If you and your family love mooncakes, trust me, it truly pays to make some yourself. Here are our recipes:

So why duck? Apparently there’s an old folk tale passed down for centuries about people coming together to overturn a corrupt ruler, and his name sounded like “duck” in the local dialect. So “to eat a duck” is to get rid of the oppressor!

For more practical reasons, eating duck in the fall has health benefits according to traditional Chinese medicine. It nourishes your body to fight the dryness of the fall and winter. One of the more popular duck dishes for this purpose is a duck and taro soup.

I’ll have to whip up a recipe for that, but we also love our Braised Duck with Taro, as well as our Sour Plum Duck, Roasted Braised Duck, and our Easy Peking Duck! 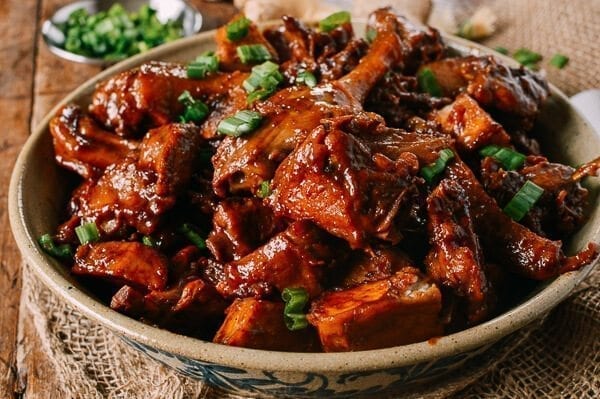 Pomelos are harvested in the fall, and, like I explained earlier, it’s a way to represent blessings for children and grandchildren.

You can display pomelos prominently on a fruit platter for sharing with friends and family. 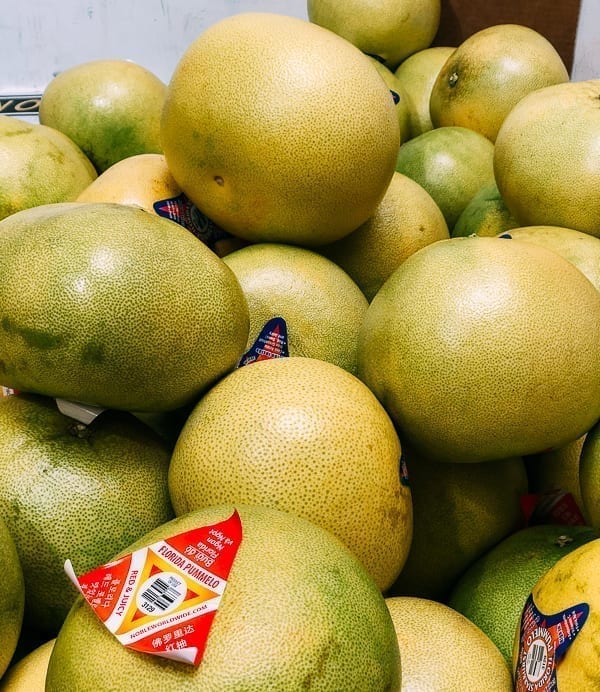 The buffalo nut, also known as water caltrop or bat nut, is a funny ingredient. It looks a little dark and evil, but people take the buffalo nut’s unique appearance and sharp corners and eat them in the hopes that their children will be smart and unique!

The buffalo nut is harvested from muddy fields in the fall. They can be eaten raw or boiled in salted water. They can also be used in braised dishes like our Pork Belly with Arrowroot recipe! 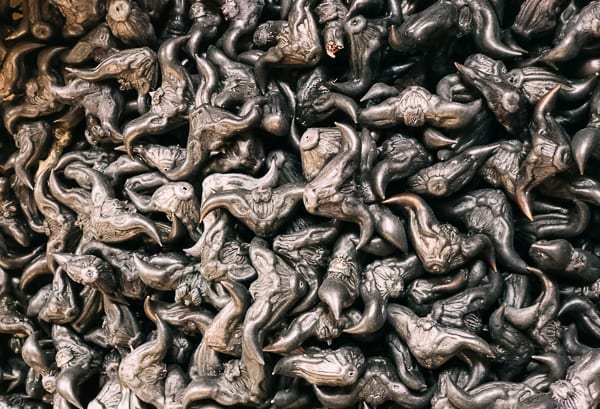 Walnuts and peanuts are round and auspicious looking, but more importantly, Chinese people love to chomp on nuts and seeds during family gatherings.

Usually women—these ladies can talk and snack on nuts and seeds at equally rapid speeds. One does not interfere with the other! All that’s left is a pile of shells.

While there’s nothing like a simple whole roasted and salted peanut, we love Chinese Boiled Peanuts too. 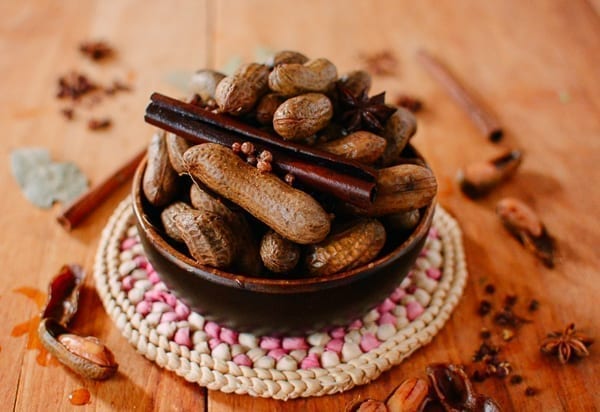 This is a Southern Chinese tradition. Both are typically boiled and eaten like snacks. “Taro” in the local Southern dialect sounds like “the coming of good fortune.” Edamame sounds like “praise” and “good news.” 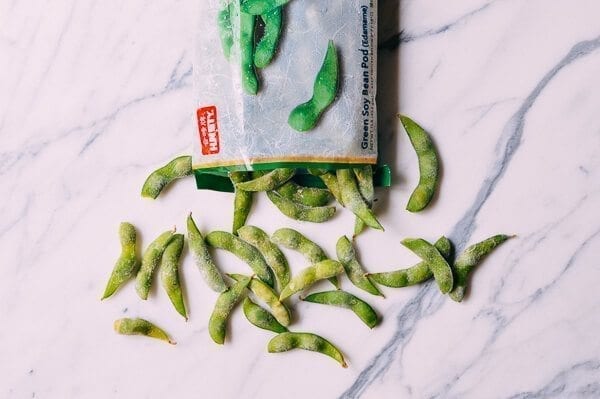 As for me, I enjoy small taro roots peeled, boiled, and dipped in a little soy sauce! Bill always says I put soy sauce in everything because I’m Shanghainese, and in this case, I have to admit it’s true! 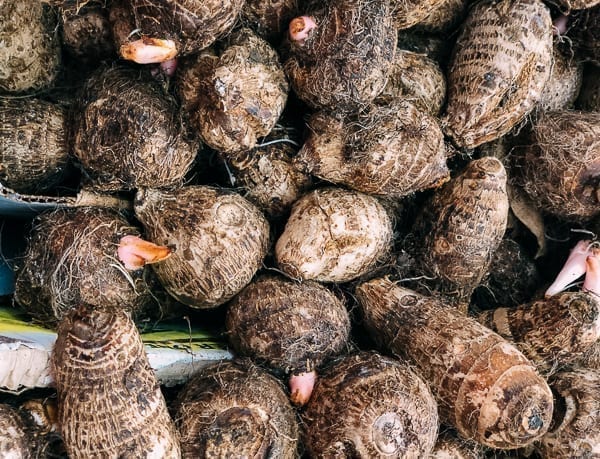 This is another thing from Bill’s family’s neck of the woods! This Southern addition to a Mid-Autumn Festival table is less traditional, but the fall is the best time to eat crab.

They’re meaty and full of the roe that many can’t get enough of. Scallion Ginger Cantonese Crab and beer is a perfect combo and the perfect thing to eat with family in the bright moonlight. 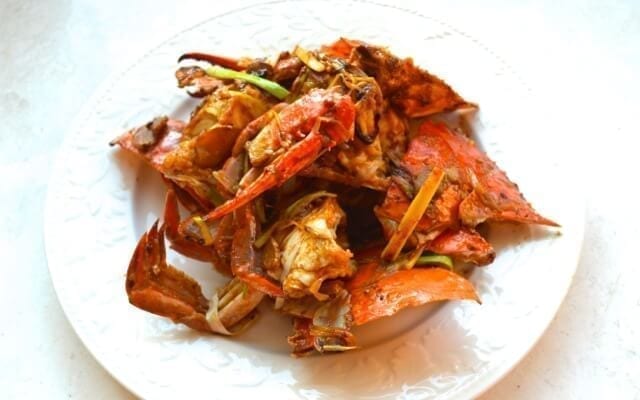 As for its shape, lotus root grows in sections like bamboo, bringing to mind new opportunities. As for the texture, if you’ve had lotus root before, you know there are delicate fibrous threads, a little bit like the texture of okra. These threads can be hard to break, so it represents being inseparable.

Regardless of the puns and the wordplay, you can’t go wrong with serving lotus root, especially this crispy stuffed version. 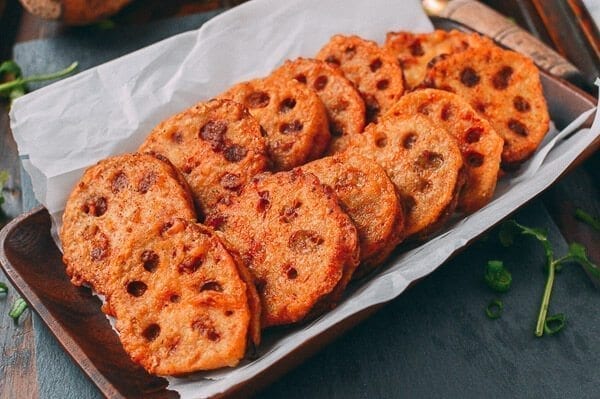 The pronunciation of pear means “to separate.” In my family, it was forbidden to share a pear because it symbolized that we’d separate! Even now, whenever I’m faced with a large pear that I can’t eat in one sitting, I still can’t share it with anyone else! I often just cut it up and use it in cooking.

People eat pears for the Mid-Autumn Festival to reverse or avoid unintended departures and separations. Sharing a mooncake is encouraged, but you can never share a pear! 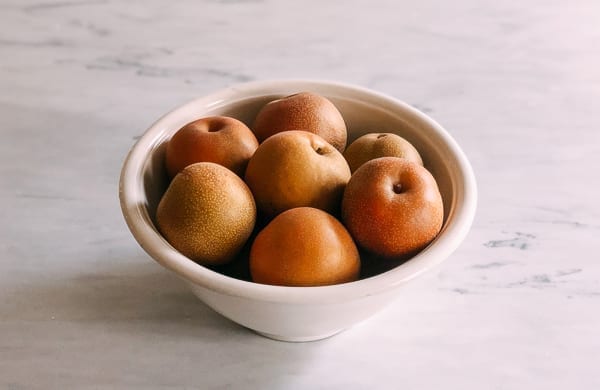 Serving a little alcohol with a celebratory meal is something everybody can agree on. During the Mid-Autumn Festival, the traditional drink of choice is osmanthus flower wine. The flower is famous for its special aroma—Asians love it in desserts, sweets, and even beauty products.

Belief is a strong motivator. As you can see, many of these beliefs are a bit lofty, to say the least.

But people still don’t want to let go of these old traditions! The Chinese have an old saying: 宁可信其有, 不可信其无. What does it mean? It’s better to believe than not to believe! :) Happy Mid-Autumn Festival, everyone!