The Art of Haggling, Chinese-Style 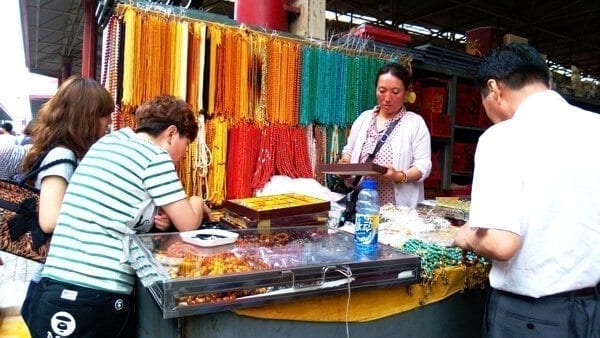 When shopping with local vendors in China, every transaction calls for haggling. If you ever come to Beijing, you will most likely end up at a large clothing market like the Silk Market, or the one that’s closest to us: Ya Xiu (雅秀), located near Beijing’s Sanlitun Village (三里屯).

My advice to you is to stay on the bus and take a nap for those two hours or go do something else. It will save you a whole lot of trouble. But if you do decide to check it out for yourself, then here comes my second piece of advice: haggle, and haggle you must, because you are about to deal with some of the shrewdest salespeople you’ve ever met.

Picture this: a large six-story shopping center tightly packed with name-brand products, from Nike sneakers to Polo shirts, Gucci bags to Coach wallets, and Burberry scarves to the latest Marc Jacobs make-up bags and recently released DVDs. They’re all fake, of course, but every day, each floor is crowded with locals and tourists alike, looking for their favorite name brands and trying their hardest not to overpay.

I worked as a buyer back in the States for accessories and cosmetics companies, and after many years of negotiating with suppliers, I was pretty certain that I was well-equipped with some above average bargaining skills.

I had my first lesson here when I was shopping with a visiting friend, who wanted to buy a couple of wallets as gifts. Since I am a lady with taste, he gave me the honor to pick out styles for him (or maybe it was because I was the only one of us who could speak Mandarin).

As we walked past each stall, shop owners would move toward us, all holding the same Chanel and Louis Vuitton catalogs. They’d mumble in English, Korean, Russian…taking quick glances and making snap judgments about where you were from.

Many vendors know at least a few words and phrases in several languages, catering to all the international tourists. We even saw one Chinese vendor explaining her prices to a couple of foreigners in pretty decent French. But I don’t speak French, so what do I know? Sounded pretty good, anyway.

“You want LV? You want Chanel? Come in look, we have everything,” they say, to anyone who passes by.

Even with both of us being Chinese, they could tell that we were foreigners. What was it? Our clothes? The way we walked?

I felt like a chicken that had just wandered into a fox den, a feeling of uneasiness washing over me. I was determined not to be fooled by their friendliness.

We had to start somewhere, so I told one of the shop owners that we were looking for leather wallets. Almost immediately, she muttered a long list of name brands for me to choose from, and without us even realizing, she’d dragged us into her stall for privacy.

She opened up some drawers and pulled out the merchandise. Many of the purses on the wall were cheaper, less expensive brands. The good stuff was all hidden in drawers and back rooms.

Realizing that everyone was selling similar goods, I knew that I could always go to another stall and buy the same thing if she didn’t accept my price. As we were making our selections, I put on my buyer’s hat and calculated the material and labor costs, deciding on a price of 100 RMB (about $16) for two wallets. $8 each seemed like a pretty good deal for both parties.

–       Her: “Ehhhh (shakes head and packs up merchandise).” Then she stopped, grabbed my arm, and gestured to the pile of wallets lying on the table. In a solemn voice, “If you really want to buy, I’ll be willing to lose money and give you two wallets for 200 RMB ($32).”

–       Me: “Okay…120 RMB.” Considering the amount of time I’d already invested in the negotiation and not really wanting to go through the entire song and dance again at another stall, I upped my price a little.

I’d hit my limit. I shrug and start to walk away, my friend following me. He whispered that he thought 200 RMB was a decent price. But by the time we’d walked about 10 feet…

The shopkeeper grudgingly put the wallets in a black plastic bag. My friend was surprised, looking appreciative and a little impressed as he pulled out his cash.

But soon after we walked out of the stall with those two new wallets, other stall owners closed in on us, pulling out the same exact wallets, exclaiming, “you want more? I have other colors, I give you 40 RMB, you want? You want?”

So much for negotiation skills.

Lesson learned: you may think you’re pretty smart, but there are always people out there who can out smart you.