How to Do a Chinese Wedding Tea Ceremony 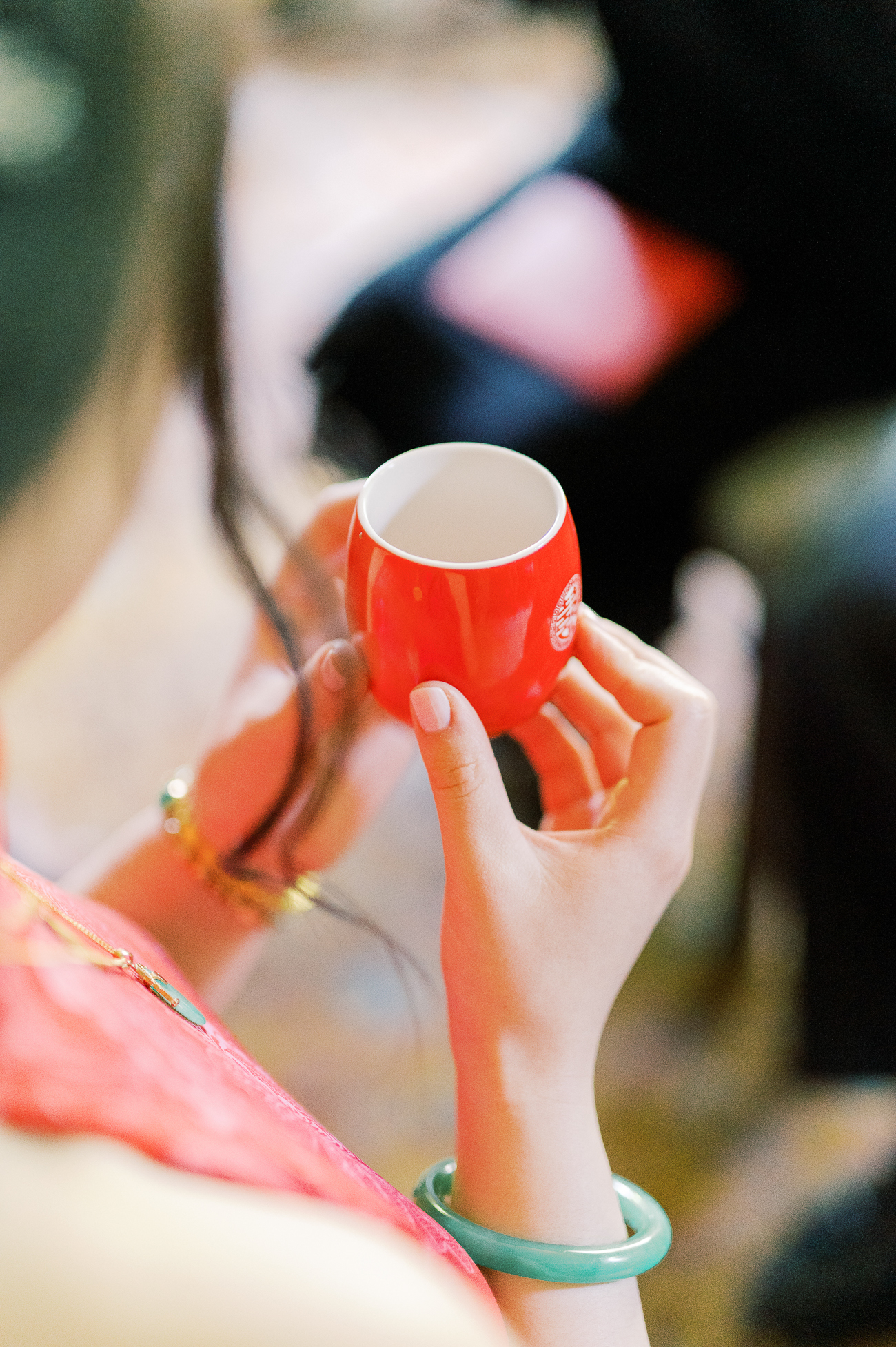 After 2020, there’s a huge backlog of delayed nuptials set to happen over the next two years. I’m looking ahead to 2 weddings, and Sarah already has 3 dates saved in her calendar! Not to mention Sarah got married back in June!

So we thought it was a good time to break down an important Chinese tradition—the Chinese wedding tea ceremony—for couples out there who are in the midst of planning their celebrations. It’s a big tradition (probably THE Chinese wedding tradition).

Note that the credit for most of the photos in this post (all except the one with me, Justin, and Barley) goes to our wedding photographer, Keristin Gaber of Haley Richter Photography.

When Sarah was planning her wedding, one of the biggest questions on our minds was the Chinese wedding tea ceremony part of the day. We wanted to make sure it was done right.

But my parents struggled to recall the finer points of their own tea ceremony back in the late 1980s. Plus, Sarah is the first of our generation of cousins to get married, so there weren’t many references to go to when Sarah was in the thick of wedding planning!

That said, we did some research on Chinese websites and consulted with older aunts and uncles, and found that traditions can vary by region, or from family to family.

In the end, though, everything went smoothly, and even our 102-year-old great grandma was very happy with all the wedding activities!

So this is our definitive guide, fresh in our minds from earlier this summer for anyone looking to conduct a Chinese wedding tea ceremony!

Disclaimer: We say “bride” and “groom” throughout this post, but this guidance could—and definitely should!—be reinterpreted as desired for Chinese LGBTQIA+ couples and their families!

What is a Chinese Wedding Tea Ceremony?

A tea ceremony is a Chinese tradition wherein the bride and groom serve tea to their respective families, including parents, grandparents, aunts, and uncles, and other esteemed elders.

The couple receives well wishes and gifts, and it’s an act of welcoming either the bride or the groom, thereby unifying both families.

Usually, the bride is getting herself ready with the bridal party at her family’s home, and the Groom and groomsmen pick her up, negotiating entrance with bridesmaids and then finally entering to partake in the tea ceremony. (Read about the door games in Sarah’s wedding post.) Then the tea ceremony can take place with each side of the family.

However, with all the hustle and bustle of weddings today, more likely than not, the whole thing takes place in one location.

Why have a Chinese Tea Ceremony?

In the context of a modern-day wedding, the Chinese tea ceremony feels akin to a small private ceremony with just close family and friends before the bigger ceremony and reception.

It’s a touching symbol of the coming together of two families and it gives the couple the opportunity to acknowledge the people who helped raise them.

On the flipside, it’s an opportunity for those close family members to personally and formally express their happiness, best wishes, and congratulations to the couple.

The Chinese tea ceremony for Sarah and her partner Justin was also an opportunity to recognize Justin’s Jewish upbringing, as they paired the tea ceremony with a Ketubah signing.

A Ketubah is a Jewish marriage contract signed by the couple and two witnesses. Going from the Ketubah signing to the tea ceremony was a very intimate and touching part of the wedding day, and a wonderful way to recognize the similarities and differences between both families’ traditions.

How to Do a Chinese Tea Ceremony

The Chinese tea ceremony was included in rehearsals the day before the wedding. There’s quite a bit of coordination involved, so you may want to build it into your plan!

Preparing the room for the tea ceremony:

My mom bought red double happiness decorations to hang and a tea set from China months ahead of time. You can order them on websites like aliexpress.com.

Another popular choice is candied lotus seeds. All of the nuts and fruits should be whole, as nothing symbolically should be missing or broken.

We also moved furniture out of the way to clear a space for chairs where the tea drinkers would sit. This also allowed room for family members to stand and watch. There’s no need for extra chairs for sitting unless there are elderly family members present. There was also a table for placing the tea set and gifts.

Ideally, you want nicer chairs for the tea drinkers to sit in. You’ll also need space for the couple to kneel on pillows in front of the chair, which is the customary and most respectful way for the tea to be served.

There is no strict rule these days, but generally the tea is served to the Groom’s family, followed by the Bride’s family.

This is because traditionally, the bride was absorbed into the man’s family and was recognized as such first by the groom’s family.

It’s outdated, but a fine way to go about things. In our case, because the bride’s side is Chinese, our original plan was to do the bride’s family first, but at one point, some of our side was running late, so we just started with Justin’s family. Sometimes logistics dictate how things go more than tradition!

Again, with modern day and multicultural weddings, you should certainly feel free to put your own spin on traditions that feel right for you!

Here’s a sample of how things could go:

As for exactly how the tea is served, there is etiquette involved. Tea is offered individually by both the bride and groom. So each individual should receive a total of 2 cups.

For example, the bride may serve one parent and the groom the other parent, and then they may switch so that both parents have received one cup of tea each from the bride and groom (two cups total).

For more than 2 individuals (i.e. if you have larger groups), the bride and groom should serve a cup of tea together to one individual at a time. The cup should always be offered with both hands, as a sign of respect.

What do i call them?!

A funny question that came up often in preparing for the tea ceremony was what the appropriate Chinese honorifics for various family members were. This is important for the couple to discuss with their parents and family beforehand, so there aren’t any awkward or confused silences!

After a given individual receives and drinks the tea, they should offer their gift of lai see—red envelopes—of money and/or gold jewelry for the bride and speak a few words to the couple as they desire. A common refrain was asking for loooots of babies!

The bride and groom then go down the line of the group of family members until everyone has been served. (This is a good time to have your photographer taking portraits with each group.) Then the next group takes their seats and is served tea.

There’s quite a bit of kitchen coordination involved in preparing the tea and getting it into the hands of the bride and groom. The roles of preppers, runners, and servers are usually fulfilled by bridesmaids, in this case our cousins! We had 5 of us on deck—me, Kaitlin, plus our 4 cousins, Chris, Jen, Steph, and Kim.

How long should the tea ceremony last?

1-2 hours, depending on the size of the family. We did ours in 45 minutes. Sarah runs a tight itinerary!

Who should be in attendance at the tea ceremony?

Barley was allowed to attend, too!

We’re the bride and groom. What should we wear to the ceremony?

It’s customary for the bride to wear a red satin or silk dress for the tea ceremony with gold accents and gold jewelry. For the groom, it’s customary to wear either a traditional Chinese red mandarin collar jacket and pants, or, if you’d like to keep things more modern, a suit (often different from the wedding suit) with a red tie.

Sarah and Justin went the slightly more modern route with a peony-print high-neck red dress, and a charcoal suit with a red tie. This actually worked out, as many Chinatown dressmakers were closed this past year.

We did dig out the family heirlooms in terms of gold jewelry. It was a mix of Bill’s mother’s gold and jade jewelry—taken out of storage for this special occasion only—and some gold pieces that were gifts when Sarah was born with her Chinese zodiac animal on them.

Sarah also wore a deep green jade bangle that Justin’s mom had acquired on her travels to China many years ago. The more the merrier when it comes to the jewelry!

I’m a guest. What should I wear to the ceremony?

For guests of a tea ceremony, there is no formal dress code, and it is really up to the discretion of the couple. At this point in the day, most folks will be dressed or partially dressed for the wedding, or may choose to wear a separate outfit from what they plan to wear for the wedding.

As you can see from the photos, we are not all too formal of a family!

Most of the men wore suits or collared shirts, with the women opting for slightly more casual summer dresses. Kaitlin opted for a nice dress, but subbed fuzzy slippers instead of heels! Grandparents who wanted to be comfortable in the summer heat wore lighter outfits.

I’m a tea receiver. Do I have to finish the tea?

Not at all, and it’s not frowned upon either way.

What should I give as a gift?

Gold jewelry is a traditional gift for the bride (usually given by closer family members like parents and grandparents). Symbolic cash in auspicious amounts (e.g., lucky numbers like $88) for the couple’s future is most common. Two red envelopes should be prepared—one for the bride and one for the groom.

Some say that the gold jewelry should be put on right away, but it may be enclosed in the red envelopes along with money, and it’s not strictly necessary unless someone is presenting it outright. Then it would be best to put it on straight away so as not to offend.

This can also be an opportunity to give the primary wedding gift, but it does not have to be. A smaller amount of lucky money may be given in addition to a larger amount as an overall wedding gift.

What kind of tea?

A Chinese red tea (known in the West as a black tea) is a safe, crowd-pleasing choice. If desired, you can augment the tea with dried Chinese fruits like nuts and dates and dried herbal flower teas for extra flavor.

Here are some additions, and their associated symbolism:

As you can see, you do have to sweat the little details a bit, but remember to have fun.

As long as there are a lot of colorful candies, red envelopes, fruits, nuts, a red dress, and some laughter, I’d consider it a successful and happy tea ceremony.