A Long Weekend in Chicago 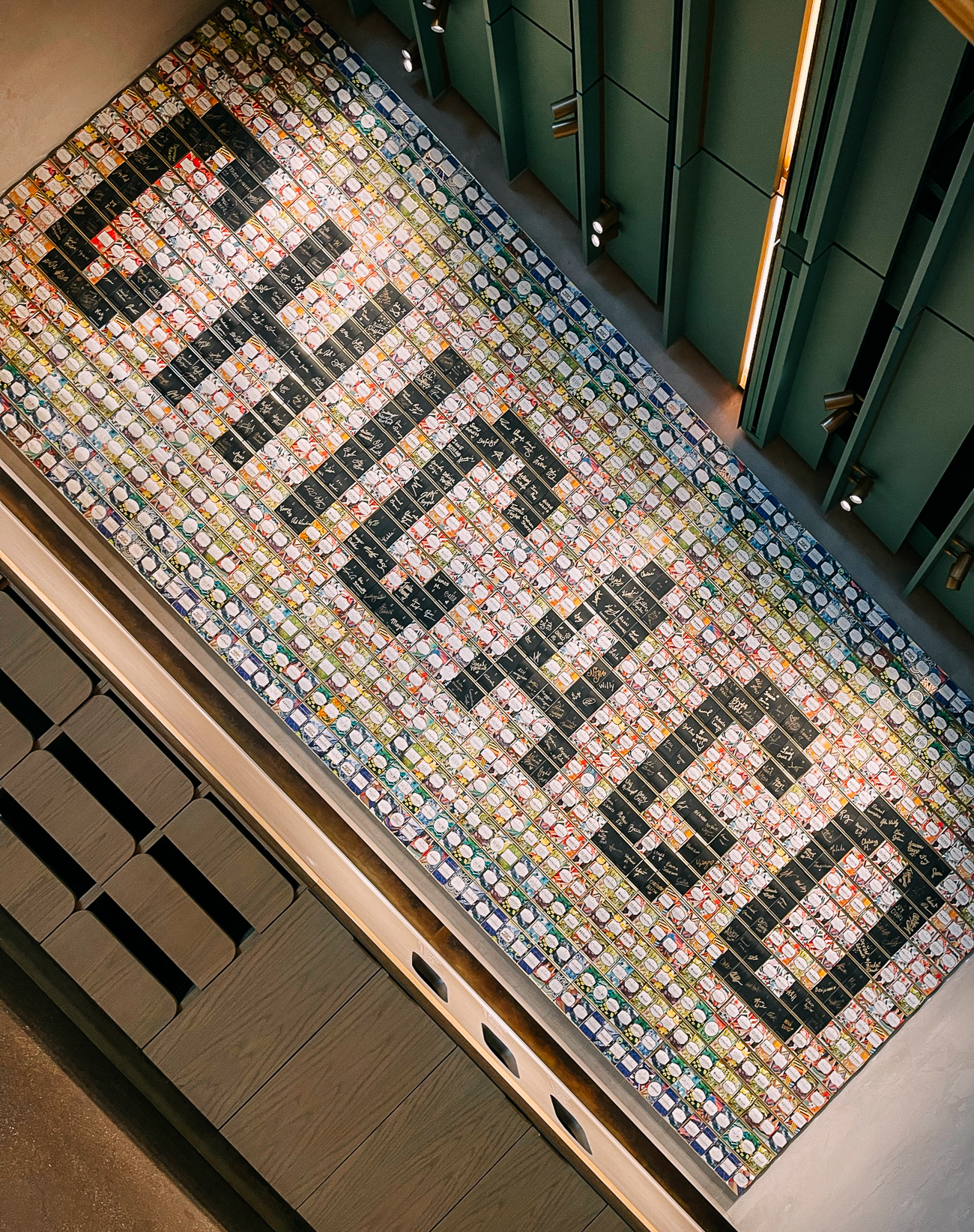 Back in early June (when the outlook for the summer was a little bit brighter and more carefree), I had a long weekend in Chicago to visit one of my best friends.

While we’re back in more uncertain times, I still want to report back on the sights and the foods, whether it’ll help you plan a future visit, or just provide a little much-needed escape.

Like probably a lot of people, my past experience in Chicago has been largely limited to passing through O’Hare on layovers to other places.

Now though, one of my best friends lives there! Friend in question is Niki (see her first blog appearance on our trip to Maine). She moved away from the NYC area in 2020 to be closer to family.

We went from seeing each other every other week to occasional Zooms with our book club and a rare FaceTime. I think most people would agree that it was hard to keep up with people in 2020, so we were long overdue for a reunion.

A New Era of Travel

Having been EXTREMELY careful all throughout 2020 and into 2021, I was, you might say, TERRIFIED of flying and venturing back out into the world, even with all the requisite precautions.

I was the person diligently wiping down every visible surface of my airplane seat, and clenching the armrest—just kidding, can’t touch the armrest, I’ll just clutch my own body—doing deep breathing exercises through my responsibly purchased N95, and not drinking or eating anything.

Luckily, a movie helped the time pass, and the flight was quick. Plus, through all my nervousness, I couldn’t wait to have a mini vacation and tackle my anxiety.

Lyfts and Ubers were very expensive on this trip, so walking and taking the bus were the way to go. Chicago’s bus system runs very predictably and had convenient routes for just about everywhere we went.

Things to Do in Chicago:

Niki and I are the same kind of type A. Usually I make an itinerary, but her itinerary was next level. It had a table of contents and options galore, complete with multiple reservations! While we had a full four days, there’s so much more we didn’t do!

We would love to hear about favorite restaurants and hidden gems in the comments for my next trip out there!

So, in no particular order, here’s what I did in Chicago…

The Museum of Contemporary Art was a quick stop on my museum day.

They were between exhibitions in some cases, so the price was lightly discounted, but there were still some cool things to see, and the building itself is fun to walk through.

In hindsight, I could have checked the exhibitions in advance to see what was up, but I enjoyed it nonetheless!

Walk Down the Magnificent Mile:

From the contemporary art museum, I headed down Magnificent Mile, the north end of Michigan Ave, and did some shopping and people watching along the way.

Overall, walking was the way to go on this trip, as the prices of Ubers and Lyfts were incredibly high due to mixed demand, and taxis could be few and far between depending on the street and neighborhood.

The Art Institute of Chicago:

It was a 30-minute walk between the Museum of Contemporary Art and the Art Institute of Chicago, so it was a relief to see the green bronze lions standing guard on the steps of the museum.

There’s tons to see at the Art Institute. There was a special Monet exhibition, but I didn’t manage to get an advance ticket. They were controlling capacity, so be sure to double-check for those kinds of rules while you are planning your visit.

My favorite exhibit of the trip was Bisa Butler, a Black artist who works with quilted fabrics to create incredible portraits celebrating African American life.

I love a good aquarium. I’m there for the sea creatures, reading about the conservation efforts, and to be surrounded by the soothing tanks.

But Sarah REALLY loves an *educational* aquarium—specifically SIGNS. The more signs the better. She wasn’t a huge fan of Shedd due to its apparent dearth of signage, finding it lacking relative to other reputable aquariums like the Monterey Bay Aquarium.

All that said, I thought Shedd Aquarium was a great stop. For me, if I learn something along the way, all the better, but it’s not my main attraction.

This was another stop that required a timed entry, so plan accordingly!

Unlike the city’s choice of pizza (more on that later) I can get behind the Chicago-style hotdog. A frank, a soft poppy seed bun, chopped onions, tomato, relish, a few spicy sport peppers, a pickle spear, celery salt and mustard.

No ketchup. ”You must dance for ketchup!” as the ladies at this hotdog stand said. (To be clear, don’t get your lines crossed and think I asked for it…it was written clearly on the sign!)

It felt like a full meal. It was delicious, and I publicly took many photos of it before devouring it on a park bench.

Inevitably, after a day or two, my Chinese food cravings set in. It seemed like MingHin Cuisine was a good spot to grab Chinese food, with locations around the city.

Some served a mix of Chinese and Japanese, but we headed to the location in Chicago’s Chinatown, where their focus is Cantonese food and Dim Sum.

The restaurant was nestled in a two-story plaza that had bakeries, Japanese restaurants, and bubble tea shops.

I haven’t had proper fresh dim sum since *2019*, and while I had some run-ins with takeout dim sum (sadly, it’s not the same), this was a real treat.

It was one of my first jaunts back to restaurants, and while it wasn’t the Chinatown scene of fresh roving carts, most everything was pretty solid and cooked to order. The ma lai go in particular is a rare sight stateside and was excellent.

I ordered way too much food, and we packed it away for later.

Go for an Architecture Boat Tour on the Chicago River

It’s impossible to ignore the Chicago River, and the canals that snake through the city. Being on foot most of the time, I had plenty of chances to pause and take in the view.

We also took my tourist status as the chance to check out a Chicago architecture boat tour. Niki is a local, but even she was looking forward to it.

There are multiple tour operators to chose from. The tour guides take you through the major towers that line the river. There’s plenty of fun facts, history, and design notes, and it was a fun couple of hours’ break from walking.

It was also a very reasonably priced afternoon activity. Though, during the summer, the sun is very strong, so come prepared for that.

Stroll Along the Riverwalk

Along the river, there are periodic stairs down to the water level where you can enjoy an outdoor bar or cafe, or sit on public chairs in the grass.

This is Chicago’s famous Riverwalk, a public pedestrian walkway and mixed use space for Chicagoans and visitors alike to enjoy.

One day we also managed to get an outdoor table at a brunch spot that was right along the water!

The farmer’s market at Lincoln Park (Green City Market Lincoln Park) had a mix of flowers, produce and some prepared baked goods.

We snagged some breakfast (spinach and feta quiche and cherry blueberry smoothie for me) and ate it on the grass.

From the farmer’s market, we headed to the beach! Okay, so beach day is probably a bit generous, as we ended up getting rained out, but we did spend a couple of hours in the sand, soaking up some sun.

North Avenue Beach is conveniently located on the edge of Lincoln Park, on the shores of Lake Michigan.

While we didn’t swim, everyone was enjoying the cool breezes and blue water.

When the rain hit, we salvaged the situation with some sushi, and I had a delicious vegan roll (which I devoured and failed to photograph. I’ve made a mental note to continue exploring the world of vegan sushi!)

While you’re in the neighborhood, you can also check out the Lincoln Park Zoo. It’s totally free to the public and has a number of enjoyable exhibits. We were in search of outdoor activities for the most part, so it was perfect for that.

My plan from Day 1 of planning this trip was to spend at least one night hiding out in my hotel with some delivery deep dish pizza spread out on the hotel bed. The choices? Lou Malnati’s vs. Pequod’s vs. Giordano’s vs. Gino’s East… I could go on.

Sarah, on a previous trip, had eaten at Gino’s East, but found it lackluster, so she advised I go with Pequod’s on a discerning friend’s recommendation. But—twist! Niki the local gently insisted on Lou Malnati’s.

We ended up going with Pequod’s (I’m hard headed at best…) and I had high hopes. I’d even go so far as to say I went into the whole experience WANTING to love it. Giant layers of cheese and meat, and plenty of oily crust? Why wouldn’t I love it?

Alas, that was not my experience. The crust was too crisp for my taste, though Pequod’s prides themselves on the just right level of browning, and maybe it’s my fault for ordering the more manageable, hotel-friendly small sizes, but they were also a tad dry.

Why does this pizza inspire so much love? WHY didn’t I listen to my best friend, a local, when she insisted on Lou Malnati’s??? Just, WHY?

I swear, I wanted to love it. I even ordered extra cheese! But my brain just wouldn’t compute. It was like eating a pile of pizza toppings on a crusty board.

After some deliberating, Niki–again, the local–concluded that Lou Malnati’s is better, with more cheese and better sauce. While I have strong reservations about the entire concept, now I have another good reason to go back to Chicago for my next visit.

Niki’s dog didn’t care nearly as much about the pizza selection.

I couldn’t make it out of the city without a silly picture in front of The Bean, formally known as Cloud Gate. We also walked through the park, which is just one of many beautiful and architecturally interesting parks located throughout the city!

If you’re lucky, you might see a concert rehearsal at the Jay Pritzker Pavilion.

Also be sure to check out the Lurie Garden just outside of the back entrance of the Art Institute of Chicago. It’s a beautiful prairie garden with lots of pollinator-loving plants, in the middle of a bustling metropolis.

(Shoutout to watchers of Gardeners World: Monty Don visited this garden in his show, American Gardens!)

Which brings us to…more gardens! I didn’t have enough time on this trip to check them out, but they look positively fantastic.

The Chicago Botanic Garden is a sprawling spectacle of plant goodness across 385 acres with “millions” of plants!

Sarah and Justin have ventured outside of Chicago on visits to Justin’s family. Good hiking and pleasant scenery can be found a little under 2 hours beyond the city at Matthiessen State Park and Starved Rock State Park (both in Oglesby, IL).

Hope you enjoyed this quick jaunt through Chicago! Happy travels and stay safe!